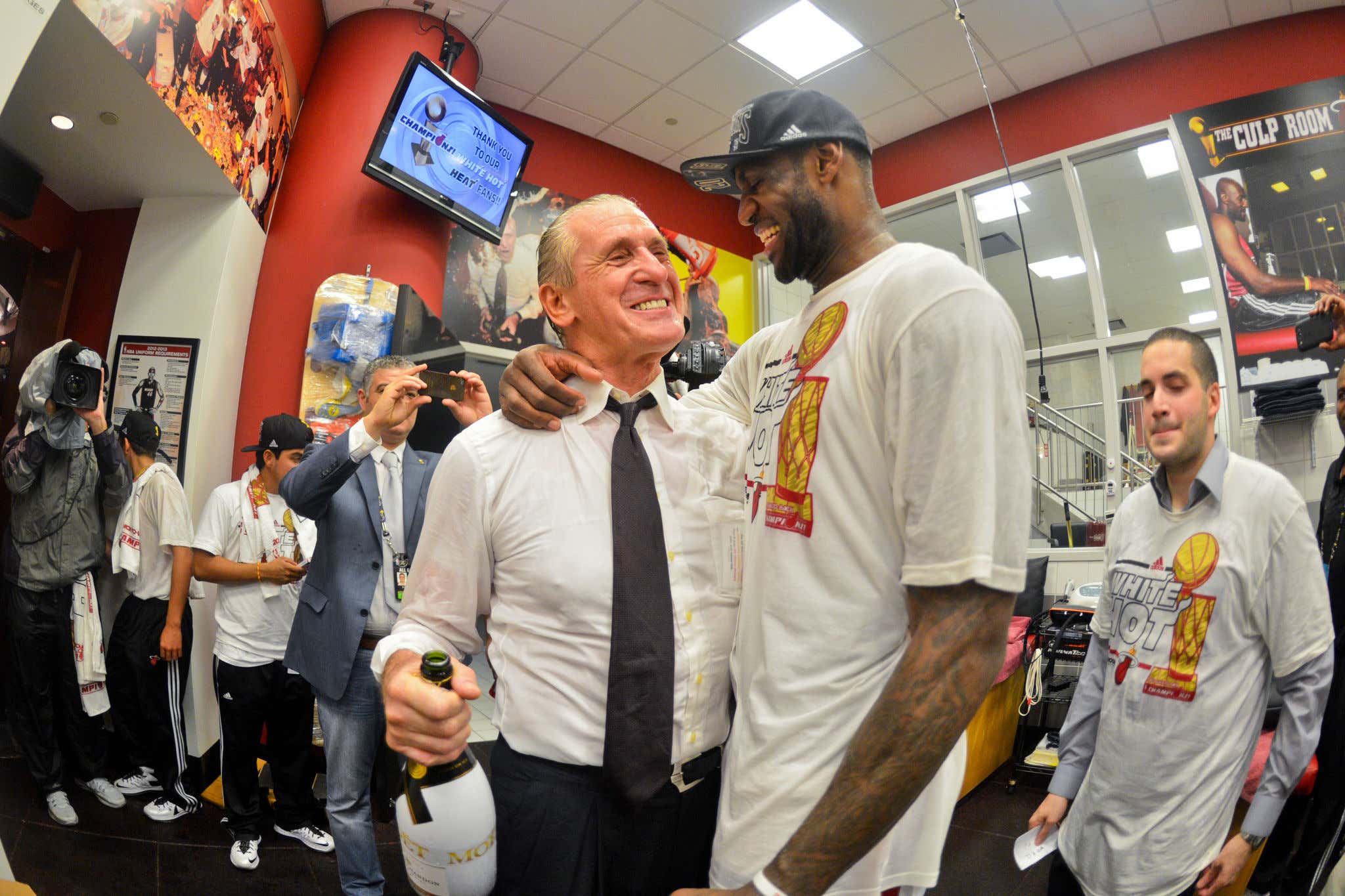 There are a lot of interesting storylines when it comes to these NBA Finals, but for me, my favorite has to be LeBron vs Pat Riley. That whole dynamic is so fascinating to me for a couple reasons. The first being, when you think of the Miami Heat, one of the first things you think of is #HeatCulture. When you play for this franchise, you are part of their family forever. Doesn't matter if you're a star or someone that had a cup of coffee for the franchise.

Then there's LeBron. I think it's safe to say he is very much not in the Heat family anymore which is wild because he's only the best player the franchise has ever had. Not only that, they got prime LeBron! One of the greatest to ever do it and the Heat got his best seasons. Remember how terrifying that man was during his Heat run?

Well ever since he decided to take his talents back to Cleveland, Pat Riley has hated the man ever since. It all stems back to LeBron not giving Riley a heads up he was leaving, which is surprising because LeBron never gives a heads up when he's about to leave a team. That's his M.O. Remember the press conference Riley had in 2014 when he basically called LeBron out for not wanting to compete and said he didn't have the guts to stay after losing to the Spurs?

"This stuff is hard. And you got to stay together, if you've got the guts. And you don't find the first door and run out of it," Riley said.

Then a few years later it was leaked by Riley that LeBron wanted Erik Spoelstra fired back in 2010. This was from Jackie MacMullan way back when

Riley revealed in the book that the day after the Heat’s loss to Dallas, he asked James, Dwyane Wade and Chris Bosh to meet him in his office for 10 minutes to check on how the team leaders felt the young season was progressing.

“They just said, ‘We’re not feeling it,’ or something like that,” Riley told Thomsen. “We talked about the typical things that we have to do, have patience and all of that stuff.

“And I remember LeBron looking at me, and he said, ‘Don’t you ever get the itch?’ I said, ‘The itch for what?’ He said, ‘The itch to coach again?’ I said, ‘No, I don’t have the itch.’ He didn’t ask any more questions, and I didn’t offer any more answers. But I know what it meant, and I always go back and wonder about what he was thinking at that time. He walked out scratching his leg like it was itching.”

“They wanted to know what was going to happen with Erik,” Riley said. “They wondered if I was going to be coaching. I said, ‘Look, Erik is the head coach, that’s it. I support him. I’m not interested in coaching.’

“The thought was in their mind at times that maybe I would come back and coach, I think. But I was truly done, I didn’t want to get back into it, and Erik is a hell of a coach. He was coming off two good playoff years, but he had not been coaching three superstars. And then with the whole LeBron effect, it would have been a tough transition for any head coach with two years of experience.”

You don't fuck with Erik Spoelstra. I don't care if you are LeBron James. That's going to rub Pat Riley the wrong way considering Spoelstra is the very definition of #HeatCulture. It's also no surprise all this stuff started to leak out once LeBron left. It's no secret the beef is real, even Dwayne Wade talked about it

I'm so interested in how this whole thing plays out. On one end you have LeBron, who gets his fair share of the benefit of the doubt from officials and most definitely remembers those Pat Riley quotes in 2013. On the other end you have Pat Riley who is the absolute Don of the league. He runs shit. What Pat Riley wants he usually gets. You know he's going to have some tricks up his sleeve. Would it shock anyone if LeBron doesn't get a friendly whistle in Game 1 and cries and then you see Pat Riley clearly smiling under his mask? Not me.

There are a ton of interesting matchups in this series, from Bam vs AD, to Jimmy vs LeBron, to any Laker attempting to stop Tyler Herro, but for me it all comes down to LeBron vs Riley. This is setting up to be the ultimate "fuck you" Finals and while it does bring me much pain and sadness that my favorite basketball team is not participating, at least we get some good drama. Here's to hoping it's a long series and say it with me.