andIn collaboration with the Sportsecyclopedia.com 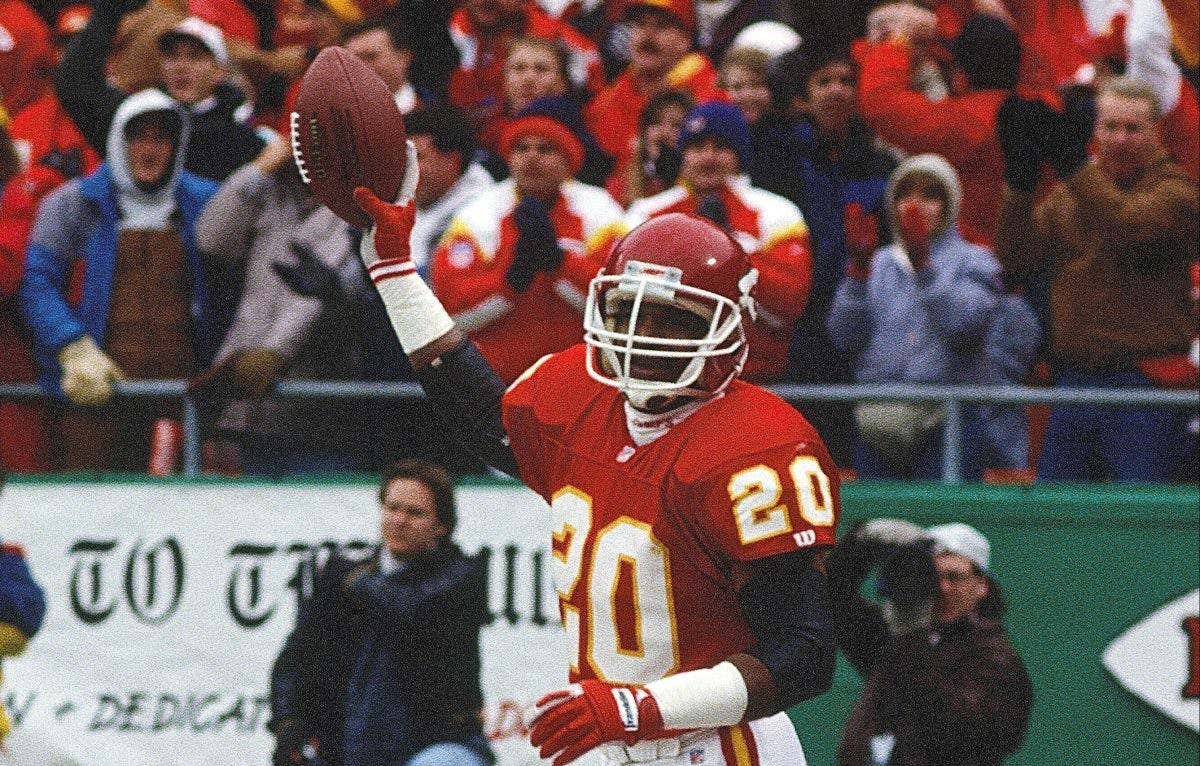 Deron Cherry of the Kansas City Chiefs ties an NFL record with four interceptions against the Seattle Seahawks on a rainy day at Arrowhead Stadium. The Chiefs forced a total of seven turnovers as they won the game 28-7, despite totaling 165 yards of total offense. Cherry was the 11th player with four picks in one game and the first to do it since Vernon Perry of the Houston Oilers in a 1979 Divisional Playoff Game against the San Diego Chargers.

Deron Cherry was born on September 12, 1959, in Riverside, New Jersey. After staring at Palmyra High School, Cherry attended nearby Rutgers University. At Rutgers, Deron Cherry played safety and punted, but did draw much interest from NFL scouts, despite being voted the MVP at Rutgers in 1979 and 1980. He went undrafted in 1981 but signed with the Kansas City Chiefs as a free agent. Cherry played sporadically over the first two seasons, before having a breakout season in 1983.

Deron Cherry had seven interceptions in 1983 after becoming a starter at Free Safety for the Chiefs and was played in the Pro-Bowl for the first time in his career. Cherry would play in the Pro Bowl six times and was named an All-Pro five times in his career, and was named the NFL’s All-Decade team in the 1980s.

Both the Kansas City Chiefs and Seattle Seahawks entered the game with 2-1 records, and both teams were coming off losses in Week 3. The Chiefs, coached by John Mackovic, were slammed 31-0 by the Miami Dolphins, while the Seattle Seahawks, coached by Chuck Knox, suffered a 35-24 loss to the Los Angeles Rams.

It was a chilly 48-degree afternoon on a rainy day in Kansas City. The Chiefs took advantage of a Seattle turnover for their first touchdown as Danny Greene fumbled a punt on the five-yard line, setting up Herman Heard on a two-yard run for the first touchdown of the game. The Chiefs made it 14-0 on a 34-yard pass from Brian Kenney to Stephone Paige.

The Chiefs got their first interception in the second quarter when Greg Hill picked off Dave Krieg and returned the ball 37 yards to the 13-yard line of Seattle. The Chiefs would make it 21-0 on a one-yard plunge by Brian Kenney. Deron Cherry’s first interception came in the third quarter as Kansas City extended the lead to 28-0 on an eight-yard touchdown pass from Brian Kenney to Stephone Paige.

The Seahawks moved the ball at will in the second half but remained unable to score, as Deron Cherry had his second pick, while Seattle fumbled and missed a field goal. The Seahawks lone score came in the third quarter following an interception by Kenny Easley. Darryl Turner caught a 35-yard pass from Dave Krieg a short time later to make it 28-7.

In the fourth quarter, Dave Krieg was benched after throwing his fourth interception of the day to Deron Cherry. Gale Gilbert came in and did not fare any better as he was picked off by Cherry, who tied the NFL record with four picks in one game. Three players have equaled Cherry’s four-interception game since 1985, bring the total to 14 players who have had four interceptions in one game.