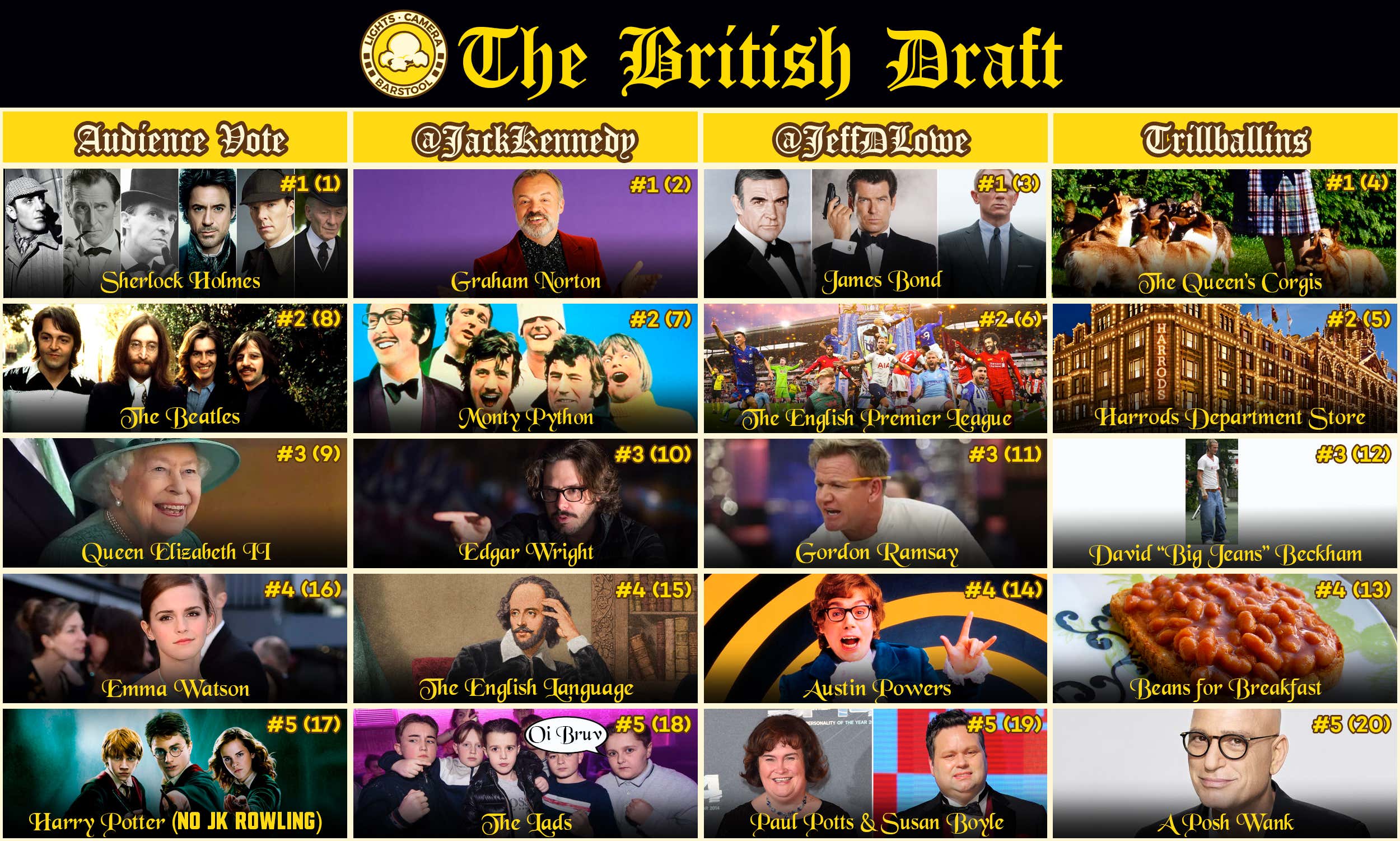 On today's episode, we talked about Vin Diesel's EDM song, Howie Mandel's insane condom excuse AND we drafted British things as part of our Enola Holmes review. Here is my grading:

The Audience (Sherlock Holmes, The Beatles, Queen Elizabeth, Emma Watson, Harry Potter): I'm not a huge Beatles guy, but it's hard to deny that both of their first picks were gas. After that, though, shit gets dicey. I mean, picking the fucking queen? George Washington is turning in his grave. I don't even really understand the Watson pick, but the fact that they got Harry Potter with their last pick and specified that J.K. Rowling was NOT included with the pick makes me proud.

Kenjac (Graham Norton, Monty Python, Edgar Wright, The English Language, The Lads): Getting away with drafting an Irish person with the second pick of the British draft is sneaky IMO. But if you're not cheating, you're not trying. Nabbing one of the best comedy troupes ever and following it up with the entire Edgar Wright catalogue (Sean of the Dead, Hot Fuzz, Scott Pilgrim, Ant-Man(I'm counting it cause he wrote it) and more) was maybe the best 1-2 punch in this draft. The thing about the English Language is that it sucks ass and is the worst, but it's most people reading this primary language, for better or worse. The lads has to be the steal of the day, though.

Jeff (James Bond, The English Premier League, Gordon Ramsay, Austin Powers, Paul Potts/Susan Boyle): I immediately take back my 1-2 punch comment because that has to go to James Bond and the EPL. The most iconic espionage character ever and the best league in all of soccer, that's fire flames. As a big TV guy, I knew both Ramsay and the BGT duo of Boyle and Potts were probably going to make his list. I don't think they're top 5 territory, but Austin Powers most certainly is.

Trillballins (The Queen's Corgis, Harrods Department Store, David "Big Jeans" Beckham, Beans for Breakfast, A Posh Wank): Trill's first two picks are so bad that they tanked what would have been an otherwise solid draft. The picture of David Beckham and his giant jeans is laugh out loud funny, and "posh wanks" are something more and more people are talking about.

Vote for who you think had the best draft below: