Yup, it's been that long. Actually, there are some folks who may be stunned that it hasn't been longer?

Anyway, December 14th, 2014, Johnny Manziel was the starting quarterback and the Browns lost to move to 7-7, officially closing the book on a winning record.

Since then, the Browns have done nothing but (mostly) lose. But today, against the Washington Football team, they can finally rise from the ashes and move to an incredible 2-1. I am personally optimistic, which likely means impending pain!

What a showdown! Jeff Garcia & Lee Suggs vs. Rex Grossman & Clinton Portis. The 2004-2005 Browns actually topped out at 3-3 that year, going 1-3 against the NFC East. Let's hope that changes this time around.

It's also worth noting that the majority of positive Browns shit over the years have come with Jeff Garcia at quarterback.

The Browns should have covered last week, plain and simple. But that's the beauty of gambling and garbage-time touchdowns I guess. Last week the Redskins lost by 15, and it could have been worse. Cleveland is the better team, without hestiation, but that has never stopped them from losing in the past! I don't love the Browns at -7 solely due to the defensive issues and the fact this feels like a classic letdown, but I am going to take it, along with the OVER once again. Betting the under would be criminal. It was shattered last week, and I expect the same this week.
PICKS: Browns -7.0, OVER 45.0
SEASON RECORD: 2-2 (ATS: 1-1, O/U: 1-1)

Well, it isn't as ugly as last week, but the Browns injury issues (now exclusively on defense) are just laughable. While the Greedy news is tough again, and there is optimism for Mack Wilson returning to a weak linebacking group, as well as a chance Adrian Clayborn plays, all eyes are on Denzel Ward…

Okay, seems good. All three questionable guys are in. We shall see how it goes…

The Browns offense, for once, looked great all around last week! 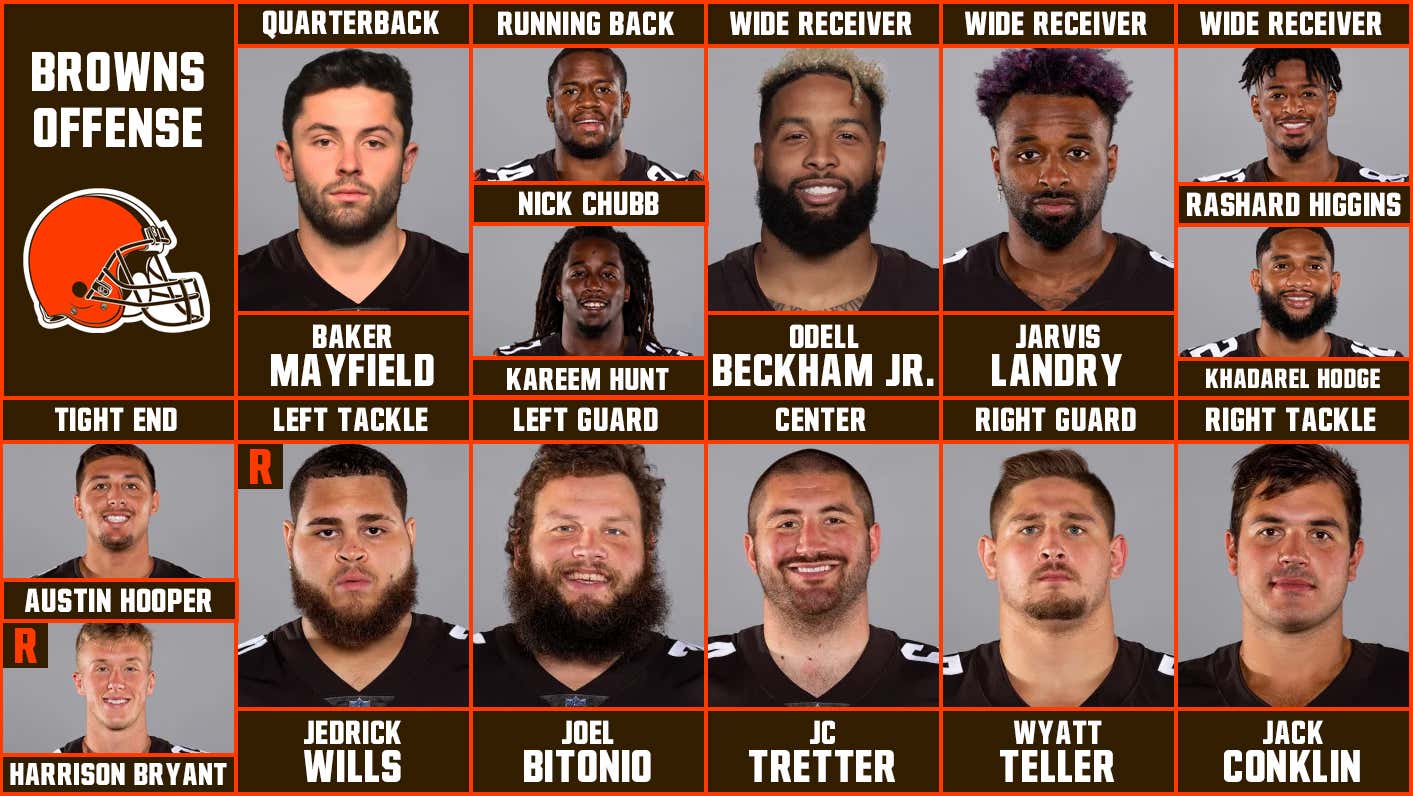 One slight tweak to the lineup is the fact that Rashard Higgins is inactive, but that isn't a huge shock as the Browns run so many two-Tight End and two-Running Back sets.

Last week the Browns did what they had to do: gash a poor rush defense:

Stefanski's system is the perfect fit for the talent and depth the Browns have at Tight End and Running Back. The duo of Chubb & Hunt is possibly the best in the league, and there is no reason the Browns shouldn't be hammering these guys every single game.

Which leads me to again say this: Baker Mayfield simply has no excuses anymore. He has to play like the #1 overall pick that he was, and the guy we saw his rookie season. Luckily, we got some flashes of that last week, as (SHOCKER!) the play-action proved to be a strength again as Stefanski plays into what helps Baker succeed…

Even his one bad throw of the game, a poor read, showed off some nice flashes of not just bailing on what's in front of him while under pressure…

He still has some things to clean up, but even a pessimist like myself has to admit I enjoyed what I saw last week from Baker. 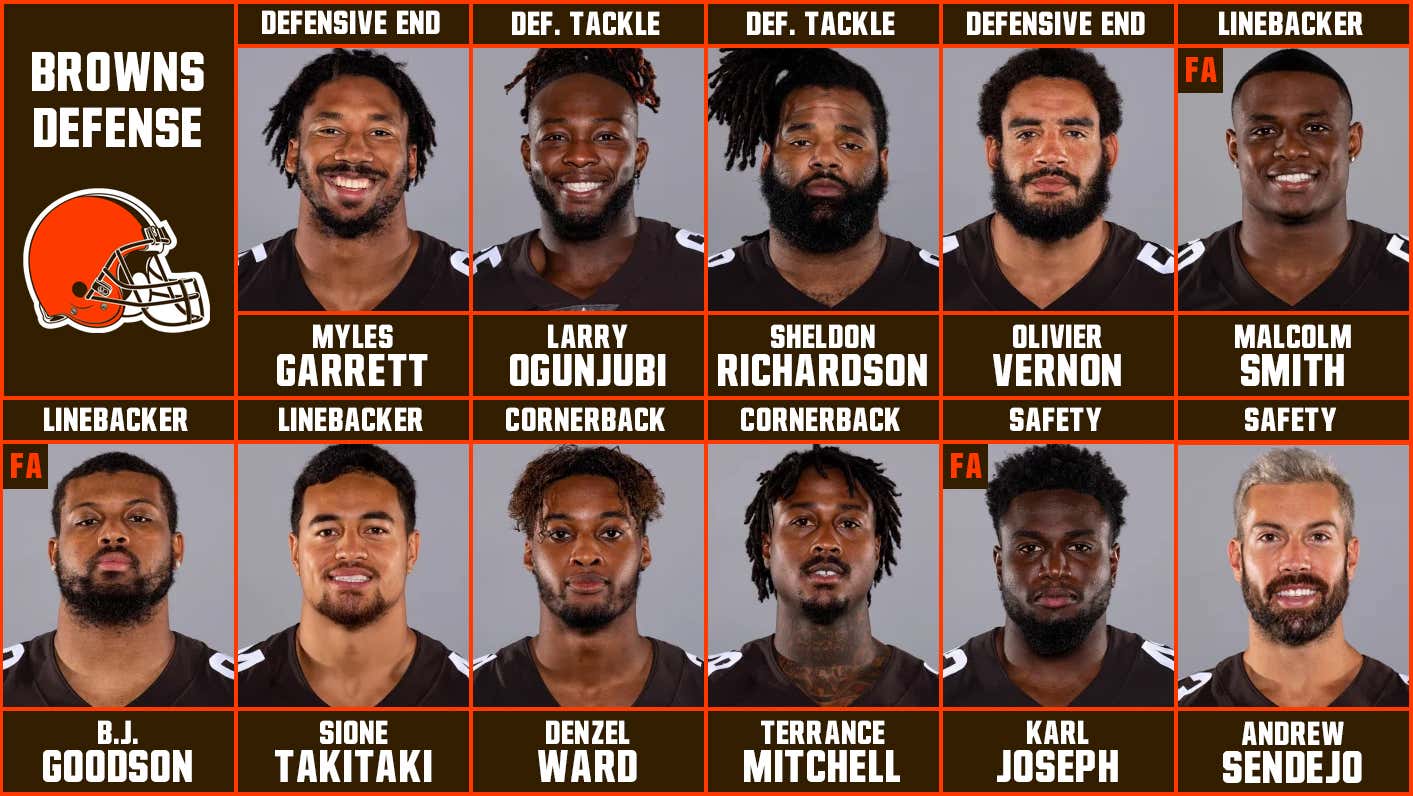 This unit is fucking headache-inducing. I'll cut them a little slack, they are fairly injured, but the secondary and linebackers are a nightmare. The return of Mack Wilson is great, but he isn't an All-Pro or anything, and a sleepy Redskins quarterback in Dwayne Haskins may very well be awoken today thanks in large part to a bad secondary in Cleveland.

Will Washington throw the football 60 times like Cincinnati last week? I doubt it, but why not test a group that, even with Denzel Ward, is as bad as Cleveland's?

Andrew Senedjo… I've got nothing.

The strenghth, however, does play well into the Redskins' weakness: offensive line. They stink.

The Browns have to terrorize Dwayne Haskins today. They must. It's their best unit, anchored by Myles Garrett…

It's time for a statement game from Garret… and he needs it because otherwise the Browns secondary could get gashed at any moment. All Washington needs today is a little life and they could be golden.

It's an obvious one: the Browns Offensive Line vs. the Washington Defensive Line.

Wills has been solid so far, but as a unit, the Browns offensive line has given Baker Mayfield plenty to work with.

On the flip-side, now led by rookie Chase Young, the Washington defensive line is a fucking nightmare.

The first two weeks aside, this is a huge test for the Browns offensive line to prove they're actually good. Without Jack Conklin they were solid last week, so if they are truly good, they'll give Baker plenty of time this week against maybe their toughest defensive line matchup (outside of Pittsburgh?) this season.

PFT and I had a little friendly wager on this game involving what the loser (based on the 7-point spread) has to wear for a week:

You may think this doesn't sound bad for PFT, but you have to understand how much the man fucking hates Dude Perfect. The idea that he has to buy Dude Perfect merchandise and then rock it for a whole entire week (in interviews, etc.) if Washington loses… that's big-time stuff.

Despite how great the Washington defense is, the Browns have no reason to lose this game. Their team is better as a whole, and if they play their game, they will win. But, as I have said before, that is not easy for this franchise to do. I can see it being close for a while, but I will (for some stupid reason) put my faith in this team.