AP- While Paul Pierce of the Boston Celtics continued to recover from wounds suffered when he was stabbed at a party in a local nightclub, police were investigating people with ties to the rap group Made Men.

Although the rap group has denied any involvement in the altercation early Monday at the Buzz Club/Europa on Stuart Street in the city’s theater district, police spokeswoman Mariellen Burns confirmed that associates of Made Men were under investigation.

The Boston Globe, citing a police source, reported Wednesday that police want to question Michael McNeill, 27, a rapper with a history of arrests and ties to Made Men dating back at least four years.

Two years ago, McNeill recorded songs with Made Men’s Raymond ″Ray Dog″ Scott for the record ″Wiseguys,″ a collaboration of rappers and former rivals from Boston street gangs.

″He’s (McNeill) from the industry, but he’s not one of Made Men,″ Leroy Peoples, an associate of the rap group, told the Globe.

Police have given no motive for the attack on Pierce, and have made no arrests.

Police said there was some sort of altercation about 1:10 a.m. at the club, but it was unclear what role if any Pierce played.

The Boston Herald, citing unidentified sources, reported Tuesday that Pierce’s assailant was seeking revenge after a confrontation at a different nightclub 24 hours earlier.

The rap group’s associates were angry over their perception that Pierce and his friends had been given special treatment, the newspaper reported.

Tuesday, doctors at New England Medical Center upgraded Pierce’s condition to good, and said a tentative release date had been set for Friday.

Pierce, 22, had surgery Monday to repair his damaged lung. Officials at the New England Medical Center termed the other stab wounds to Pierce’s face, neck and back as mostly superficial.

Former coach Tommy Heinsohn said Pierce had been wearing a leather jacket, which helped protect him. Pierce was able to walk into the hospital’s emergency after being driven there by friends.

Pierce was the Celtics’ first-round draft choice out of Kansas in 1998.

Burns said the Buzz Club was cited Tuesday for assault with a dangerous weapon on their premises, and failing to notify police in a proper manner.

The club’s manager, Robert LaBerge, said he was not aware of the citations, and had not been contacted by police.

It always cracked me up hearing Laker fans knock The Truth for his wheelchair incident in Game 1 of the 2008 Finals.

And a bunch of other textbook "pot calling the kettle black" examples lobbed his way by people from the fakest, most toxic cess-pool on Earth.

People forget that in 2000, only his third in the league, he got diced up by Ray Benzino's crew about a month before the season began and then proceeded to have a breakout year. Starting in all 82 games, he averaged 25.3 points, 6.4 rebounds, 3.1 assists and 1.68 steals in 38.0 minutes. He led the Celtics and finished eighth in the league in points per game, fourth in total points (2,071). He was named NBA Player of the Month for March 2001 after averaging 30.3 points, 7.2 rebounds, 3.4 assists and 1.60 steals for the month.

How's that for soft?

It was a wild time in local news in Boston.

The name "Benzino" was familiar to those dialed in to the local hip hop scene. But not really outside of that. He was an aspiring rapper and co-founder of the up and coming Source Magazine, which he and partner David Mays began out of May's Harvard dorm room.

However, his father, was a big hitter in the Patriarca crime family and very well known.

(Ray Patriarca was head of one of the biggest crime families in New England, operated out of Providence, Rhode Island.)

So Benzino was no stranger to that life.

Benzino's "crew" went by a few different names, his hop-hop groups were "The Almighty RSO" and "Hangmen 3", and his street crew was the "Made Men".

Allegedly, on the night of September 25, 2000 Pierce and a couple friends including teammate Tony Battie visited Buzz nightclub in downtown Boston.

There was a run-in with him and the "Made Men" crew that started over some females and shit got crazy. According to Pierce Pierce one of the guys told him to stop talking to one of the girls, he told him to beat it and then a fight broke out. It turned into an all out brawl and when it was broken up, Pierce was so full of adrenaline he wasn't even aware that he had been stabbed. 11 times.

Battie and his brother rushed Pierce to Tufts Medical emergency room and he was given emergency lung surgery. He was stabbed 3 times in the stomach and 5 times in the back by two different knives. He was also smashed in the head with a champagne bottle which sliced open just above his right eye and almost resulted in him losing the eye. The Celtics were informed he might not survive. And if he did, his chances of ever playing again were in severe jeopardy.

He also went through a deep depression that he only recently made public to Jackie Mac a few years back, revealing that he dealt with paranoia over crowds and post-traumatic stress stemming from the incident.

One guy named William Ragland was convicted for assault, for stabbing Pierce, and sentenced to 10 years in jail. Another man, Trevor Watson, was sentenced to a year for hitting Pierce during the fight. The other assailants were unable to be identified and witnesses, including Watson and Ragland refused to speak.

In 2003, two and a half years after the attack, Pierce pledged $2.5 million to help expand the high-tech surgical center at Tufts-New England Medical Center that helped make his recovery possible. Pierce stated it was an opportunity for him "to give back to the hospital that was there for me when I needed it."

So the next time somebody in your company refers to The Truth as a soft-ass bitch, ask them if they could withstand 11 stab wounds to the face, stomach, and back and then come back and excel at the top of their field a couple months later. Then remaining in the same place where the traumatic incident took place for 12 more years.

p.s. - KFC and I almost had our own run in with Benzino a few years ago that scared the shit out of me.

KFC blogged something and mistakenly referred to Benzino as Irv Gotti.

I corrected him on twitter without @'ing Benzino. As I had a habit of doing.

Now I'm not sure if Mr. Benzino had twitter alerts on for just his name being mentioned, or if he searched his own name. But he responded to me something along the lines of "Why don't you come try it?" (it's since deleted.)

Like a little bitch, I saw my life flash before my eyes and immediately apologized and tried to throw KFC under the bus. 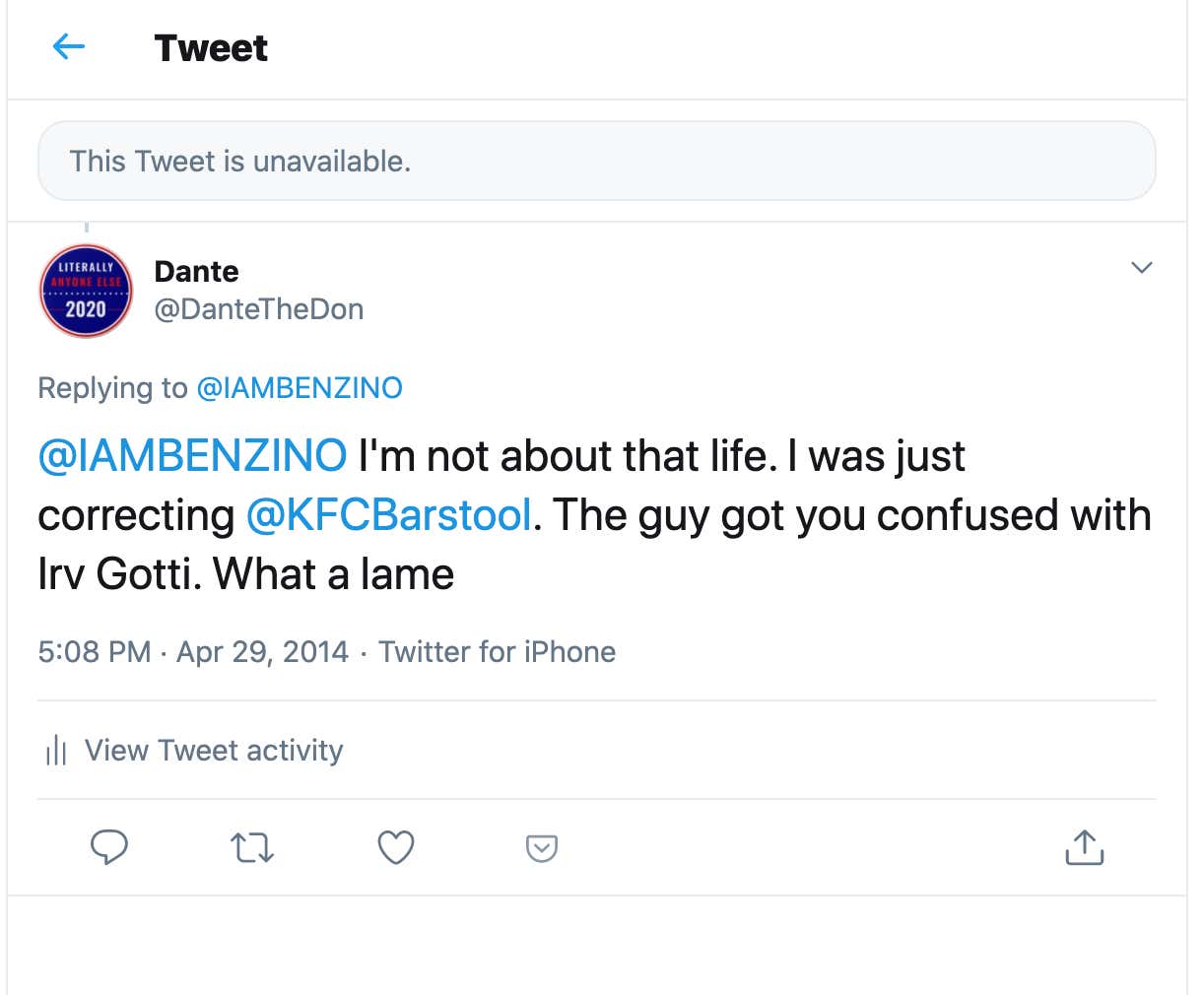