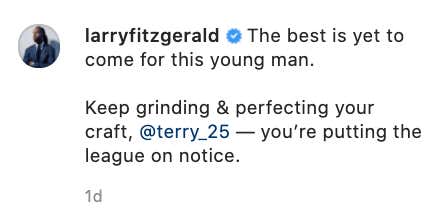 Ok so I slightly paraphrased what Larry Fitzgerald said, but it's the same idea. Must mean a ton to Terry McLaurin to get this type of public praise from an all time legend like Larry Fitzgerald. Fitz is one of the best to ever do it with 9 1,000+ yard seasons, 120 TDs, and awesome dreadlocks. Scary Terry was 9 years old when Fitzgerald joined the league, and now is the heir apparent to his throne.

And for good reason, McLaurin is freaking awesome at wide receiver. I don't want to get ahead of myself, but if Haskins pans out, we could very well be watching the best WR in Redskins/WFT history, Art Monk included. That's how high I am on Terry, and apparently Larry Fitzgerald is smoking the same stuff as me.

It's a shame they didn't get a veteran, proven WR to play opposite of Terry and take some pressure off of him. With limited receiving options the defense knows exactly where Haskins is looking on every play. But look for him to have 8 grabs for 110 yards and 2 TDs this week vs the Browns. Gotta perform big after that sort of praise from Larry Fitz, and I think he'll step up to the challenge.