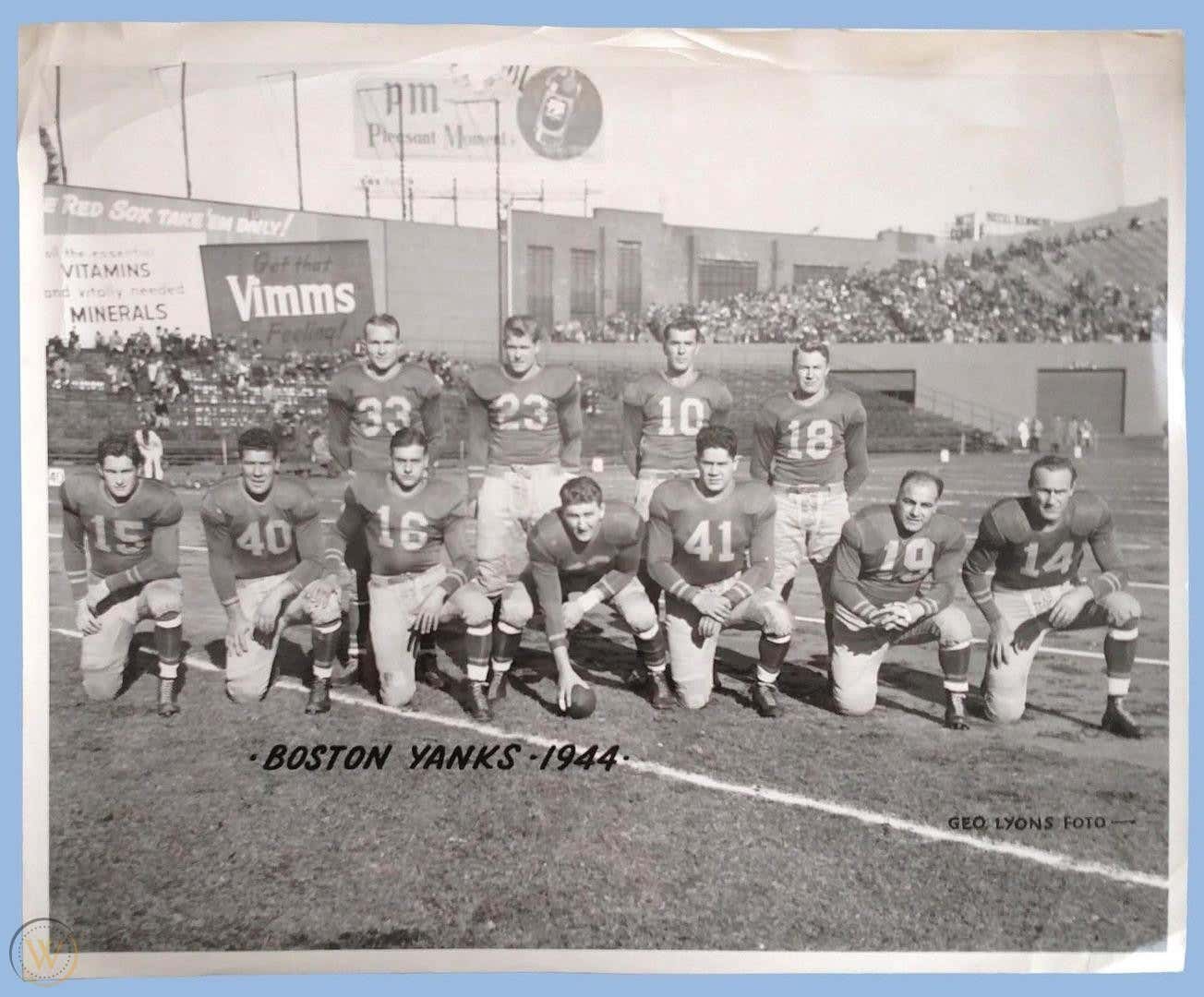 The NFL returns to Boston, as the Yanks host the Philadelphia Eagles at Fenway Park, losing 28-7. Owner Ted Collins initially wanted his new team to play in New York at Yankee Stadium. However, the Giants, with a rival team already in Brooklyn, refused to allow them into their territory. The Yanks would play five seasons before eventually moving to New York in 1949. They would later move to Dallas before folding after the 1952 season. They are the last NFL team that folded.

Expansion was a surprise for the NFL, with the league dealing with player shortages due to World War II. The Yanks joined the league, as the Brooklyn Tigers, formerly called the Brooklyn Dodgers, resumed play after a year hiatus. Ted Collins, who managed the career of Kate Smith, owned the newest team and wanted to play at Yankee Stadium. However, with Brooklyn returning, the New York Giants used their option to declare territorial rights and blocked the Yanks from playing in the Bronx.

The Boston Yanks were the third NFL franchise in Boston. A team known as the Boston Bulldogs played one season in 1929. In 1932, as the league was coming of age, Boston got a second-team named the Braves, who became the Boston Redskins in 1933. The team had success on the field but struggled to draw fans and moved to Washington in 1937.

The Boston Yanks were coached by Herb Kopf, who had previously been the head coach at Manhattan College. The game marked the return of the Philadelphia Eagles, who in 1943 merged with the Pittsburgh Steelers and played as the Steagles. The Eagles controlled the game at Fenway Park from the start as Roy Zimmerman scored from the one-yard line in the first quarter. In the second quarter, Philadelphia made it 14-0 on a two-yar run by Jack Banta. Things did not get better for Boston in the second half, as Mel Bleeker scored from the one to make it 21-0. The Yanks got their first score in the fourth quarter when Teddy Williams, an alumnus from Boston College, had a 25-yard run for pay dirt. However, the Eagles got a seven-yard run by Ernie Steele to win the game 28-7.

The Boston Yanks would lose their first four games before defeating the Brooklyn Tigers 17-14 on October 29th. The Yanks would beat Brooklyn again three weeks later at Fenway Park 13-6. It would be the only two wins on the season for Boston, who posted a record of 2-8. The Brooklyn Tigers, meanwhile, lost all ten games. Brooklyn merged with Boston in 1945 and played merely as the Yanks, posting a record of 3-6-1.

Brooklyn would fade into history as the Boston Yanks emerged in 1946. They would play three more seasons, posting a record of 14-38-3 over five seasons. The Yanks moved to New York in 1949 and continued to struggle. In 1952 they became the Dallas Texans and barely made it through the season, as the league assumed control as the franchise folded following the season. Boston’s next chance at professional football came in 1960 with the Boston Patriots of the American Football League.