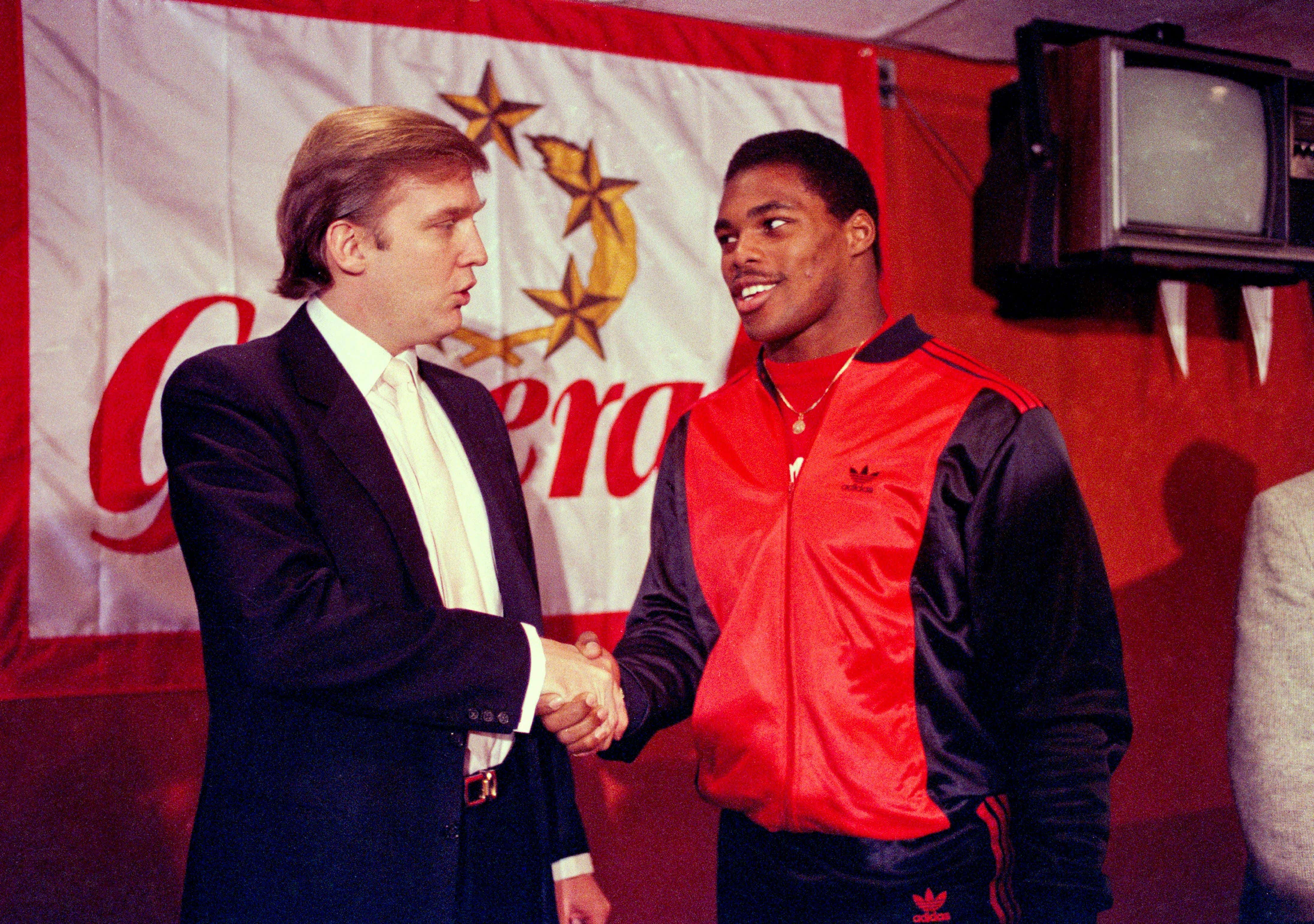 I consider myself to be a bit of a history nerd. And as such, let me get in a shameless plug for the Twisted History podcast about Rasputin I did this week with Large, which was a blast am I'm proud of how it came out.

So as a wanna be history buff, I'll say that as far as I know, there have been exactly two US Presidents in our nation's history who have owned professional sports franchises. (That is, unless Millard Fillmore owned some professional crew boat or Teddy Roosevelt bought a polo team or something, which would be news to me.) The first was George W. Bush, who of course owned the Texas Rangers. And the second is Donald Trump, who owned the New Jersey Generals in the USFL. As a matter of fact, Trump signed both Herschel Walker and Doug Flutie to personal service contracts that, as far as I know, might still have him on his payroll today.

The USFL, in case you're not aware, operated from 1982-86. That, according to the 30-for-30 that ESPN produced about it, was how long it took Trump to get bored with the whole thing, realize the NFL was going absorb them, and decided the best course of action was to sue instead. The USFL took the NFL to court and did what few people have done, which was to actually beat them. And so the owners all got to divvy up the proceeds of the lawsuit. Which meant they each got 1/8th of $1.00. Or 12.5 cents each.

What hasn't come out until now is the correspondence NJ Generals owner Trump was exchanging with a former POTUS, 30 years before he'd occupy the same office. Because we clearly live in a simulation. Reality could never be this weird.

The Richard Nixon Presidential Library has just begun a display of some of his letters that includes some communication he had with Trump. Politics aside, it's a nerdgasm for anyone who's fascinated by both American history, current events and pro football.

AP - [A] thirty-something Donald Trump and a seventy-ish Richard Nixon struck up a decade-long, fulsome correspondence in the 1980s that meandered from football and real estate to Vietnam and media strategy. …

“I think that you are one of this country’s great men, and it was an honor to spend an evening with you,” Trump writes to Nixon in June 1982, less than eight years after Nixon resigned the presidency during the Watergate scandal. The two had been spotted together at the “21” nightclub and Trump was writing Nixon to thank him for forwarding a photo.

The next fall, it is Nixon chiming in.

“Let me be so presumptuous as to offer a little free advice (which is worth, incidentally, exactly what it costs!)” Nixon writes to Trump. Nixon, who played football in college and never lost his love for the game, then unspools detailed thoughts on how Trump should handle the New Jersey Generals football team. 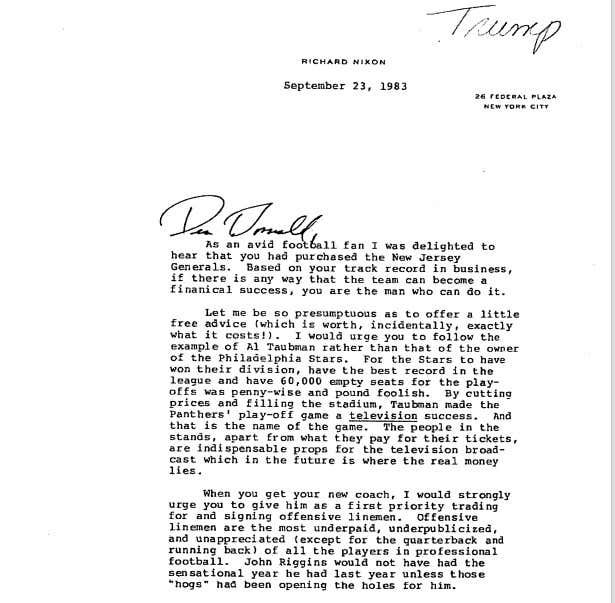 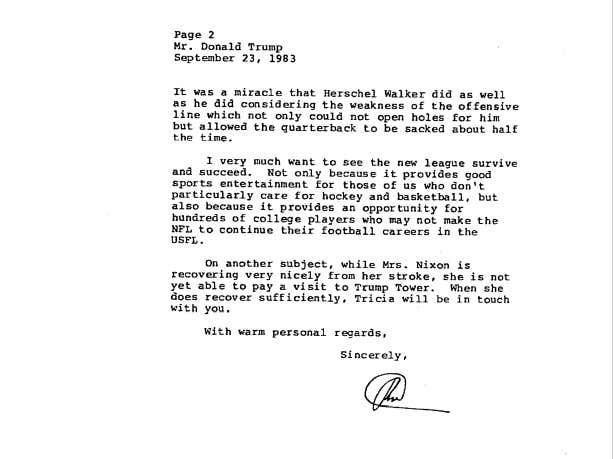 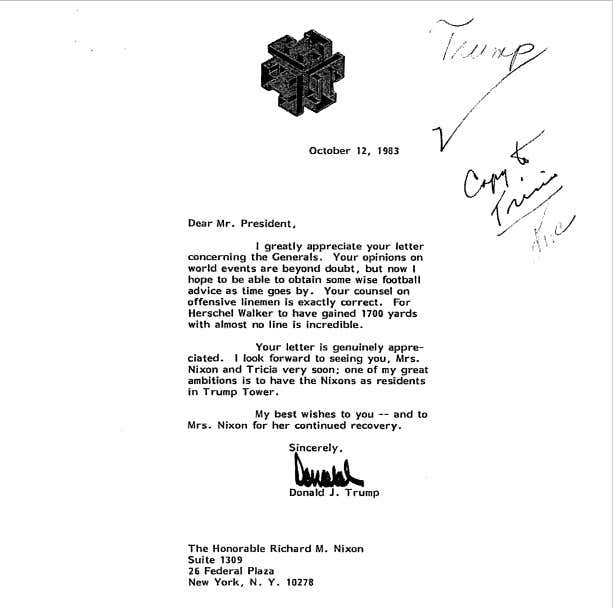 Say what you will about either men or how kind or unkind history has been to Nixon. But you can't find fault with his business or football advice.

As the NFL is finding out right now, you do need fans in the stands for the home audience. Football played in front of thousands of empty seats is something you settle for if it's the only way you can get it. But like with the USFL and later the XFL, the NFL's TV ratings are seriously suffering. Humans have been sitting in circles and watching men fight since the days of the Roman gladiators. And piping in crowd noise like it's the laugh track on "Big Bang Theory" doesn't cut it.

Second, Nixon was spot on about building an offense around the O-line. From the ball-out as it were, instead of from the sidelines-in. Especially in those days. Especially in a league that wasn't established financially. And that was trying to build around a freakishly talented running back like Walker. I know that there are lazy, cliche'-dependent sportswriters who love nothing more than to compare Bill Belichick to Nixon. But this very philosophy is the I-beams drilled down to the bedrock upon which Belichick's Dynasty rests.

This might not fascinate everyone, but it should. So many politicians fake caring about sports because their handlers and polling data shows it resonates with the Joe Sixpack voters and makes them seem relatable. Most of them fail miserably. (See: Ted Kennedy, during the home run chase of 1998 when he called the two most talked about people in the country "Mike McGwire and Sammy Sooser.") Nixon did know his stuff. I remember a story I read a long time ago when Nixon was the VP under Eisenhower and they had the 1959 "Go Go" White Sox out to the White House. Supposedly Nixon approached someone who barely played that season (it might have been a catcher. Possibly Earl Battey but don't hold me to that.) Anyway, the story went that Nixon approached him, called the player by name and the guy asked how he recognized him. And his reply was that he didn't necessarily; just that he recognized the other 24 players so he guessed him by way of process of elimination.

True or apocryphal, these letters prove that he really was a legit sports fan and not someone who faked it to pander to the voters. And maybe gives creedence to the old urban legend that he got to call a play for the team formerly known as the Washington R-words.

[George] Allen and Nixon were, indeed, good friends. … So Nixon was quite pleased when his friend came to town in 1971. Nixon told the press corps, "I am betting on the Redskins for the championship in either 1971 or 1972."

After the Redskins suffered their first two losses of the season in Weeks 6 and 7, Allen brought the president out to the Redskins' practice field for a surprise pep talk for the players. Allen let the president call a play on offense during practice that day. Nixon called for a reverse and the play went over well.

Fast forward to soon before the playoff game. Nixon called the Redskins while Allen was in a strategy meeting with his quarterback, Billy Kilmer. Allen handed the phone to Kilmer to let him know that it was, indeed, the president on the phone. The president suggested a reverse play. So when Allen called the play at the end of the second quarter, Kilmer naturally assumed that Allen was following Nixon's suggestion. The players talked about it and the press eventually got wind of it, as well. Shirley Povich of the Washington Post was one of the first to write about it, and it became a longstanding legend.

Now I believe it.

P.S. I also believe Trump would never pass up the chance to promote his brand and make a buck. You have to love him trying to get the former POTUS and First Lady to move into Trump Tower. ABC: Always. Be. Closing. What a country.