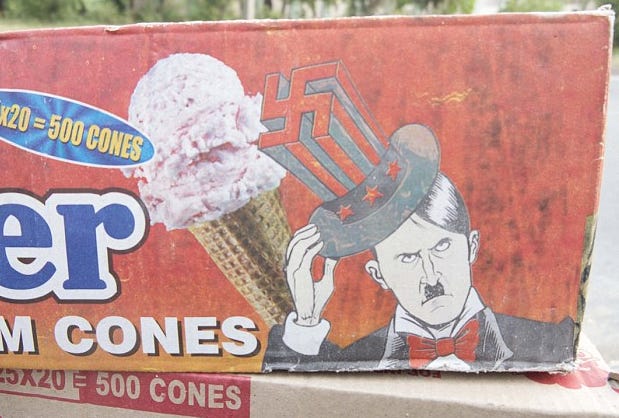 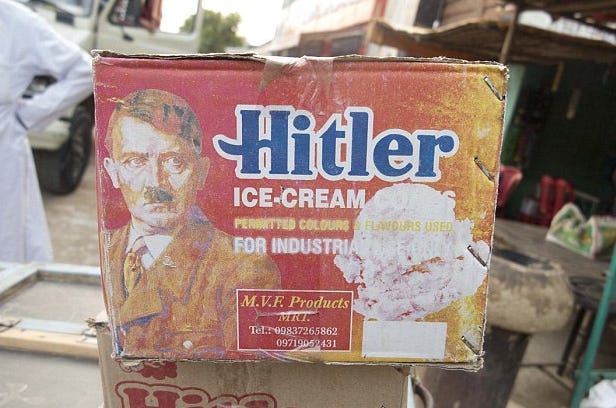 (Source) Even for the most dedicated of ice cream lovers this sweet treat may prove a little hard to swallow. Unbelievably a brand of ice cream cone is readily available in India which is named after Hitler. It’s difficult to fathom what the Nazi leader may have in common with the crunchy snack, but Hitler’s name is splashed across boxes of the tasteless delicacy which is hawked across the country.

Meanwhile the cold eyes of the killer stare out at ice cream customers from the side of the packaging. In some instances he appears in cartoon form in a Swastika-shaped top hat with a jaunty red bowtie, which is somewhat at odds with his furious expression.  Other more sombre packages depict him in full military regalia with almost photographic realism, looking very out of place next to an ice cream that’s almost as big as he is.

But all the boxes of cones have the notorious moustache on display. A lack of Holocaust education in India means that people on the sub-continent know little about the Nazi leader, and consequently Hitler-themed pubs and restaurants are not viewed with outrage. But back in the country that struggles to shake off his murderous legacy 70 years after his death, it is a different story.

This is probably going to sound pretty odd but I’m so jealous of these stupid Indians. Hear me out. Remember when you were a kid and you could basically do or say anything and have the excuse be “he’s just a kid, he doesn’t know better”. Well that’s basically what India is except instead of a kid and an adolescent phase, it’s an entire country and the rest of time. Look at this goofy motherfucker. 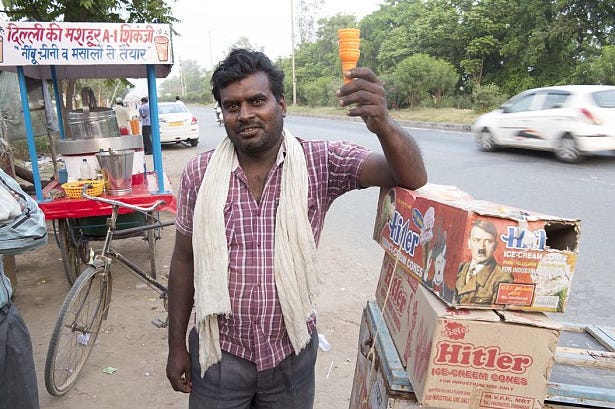 You think that guy has any idea who Hitler was or how many people he murdered? No chance. Hitler? Oh yeah we’ve got Hitlers, right here, 2 for a dollar, Hitler Ice Creams, best Ice cream in the world. Here, take a bite, Hitler so good, Hitler. 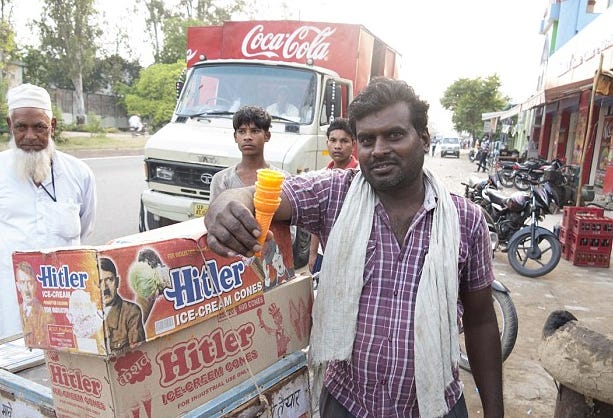 Fucking India, can’t even be mad, just living that blissful ignorant life where the most evil man to ever walk the earth is actually a nice little summer treat for the kids.

2. The Spongebob ones where his eyes are gumballs.