Bless 'em. God bless them and their hopeful, naive little hearts. They try so hard to be the Little Fanbase That Could, but for all their "We think we can"s, they simply cannot get over that hill and end up sliding backwards into the station, slam into the platform and kill dozens. And then they come back for more abuse. It's got to be hard keeping it so hardcore.

So today they organized a protest about the one issue they can all agree upon. That one battle flag they can rally behind in unity. That Adam Gase sucks. That he alone is the key to all their pain and woe. And once he's replaced, it will usher in a new era. A utopia like those heady days of Bill Parcells 22 years ago and Weeb Eubanks/Joe Namath 50 years ago.

No one could predict what the turnout could be. So we all stood by with baited breath. Would there be hundreds of Jets fans rallying to the cause, declaring in one clear voice they would not go quietly into the night? That they would not vanish without a fight? Thousands, perhaps? Tens of thousands even? Inspired by this clarion call to action? 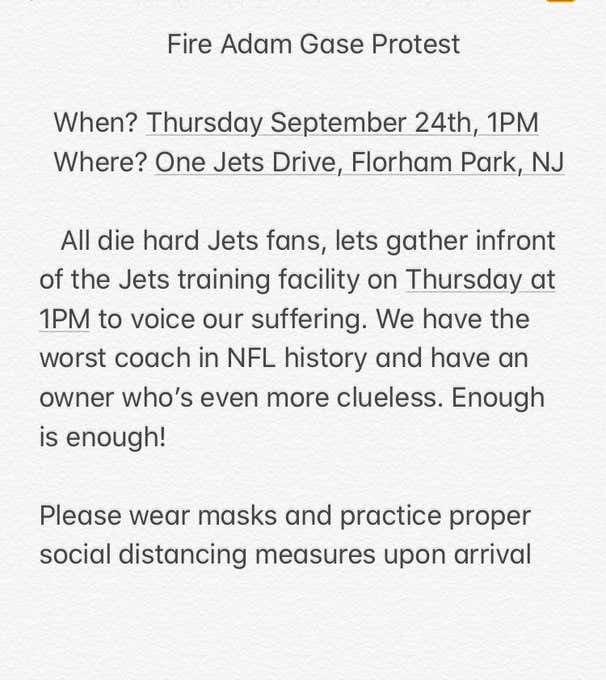 Well as it turned out, the one thing they didn't need to worry about was social distancing. That issue very much took care of itself.

OK, while it's not exactly Les Miserables leaving the barricades of Paris in multitudes and storming the Bastille in righteous anger, the drivers honking their horns sort of count as protesters. So let's round up and give them, what? A dozen people? Maybe? Not a bad turnout, all things considered. Maybe next time they won't schedule their protest at 1 p.m. on a Thursday when you've got so much competition for your attention. Like the Cubs and Pirates. "The Wendy Williams Show." The Golf Channel is showing first round action from the Corales Puntacana Resort Open & Championship. Folks are busy. So this was actually pretty successful.

Oh, and if Adam Gase and all his army of loyalists consider this a win, they'll have to think again. That dozen strong collection of sad misfits made up about 20% of the Jets remaining fans. And they have spoken. Not loudly or clearly, but they've spoken.

I swear if the Jets didn't exist, I'd have to invent them.