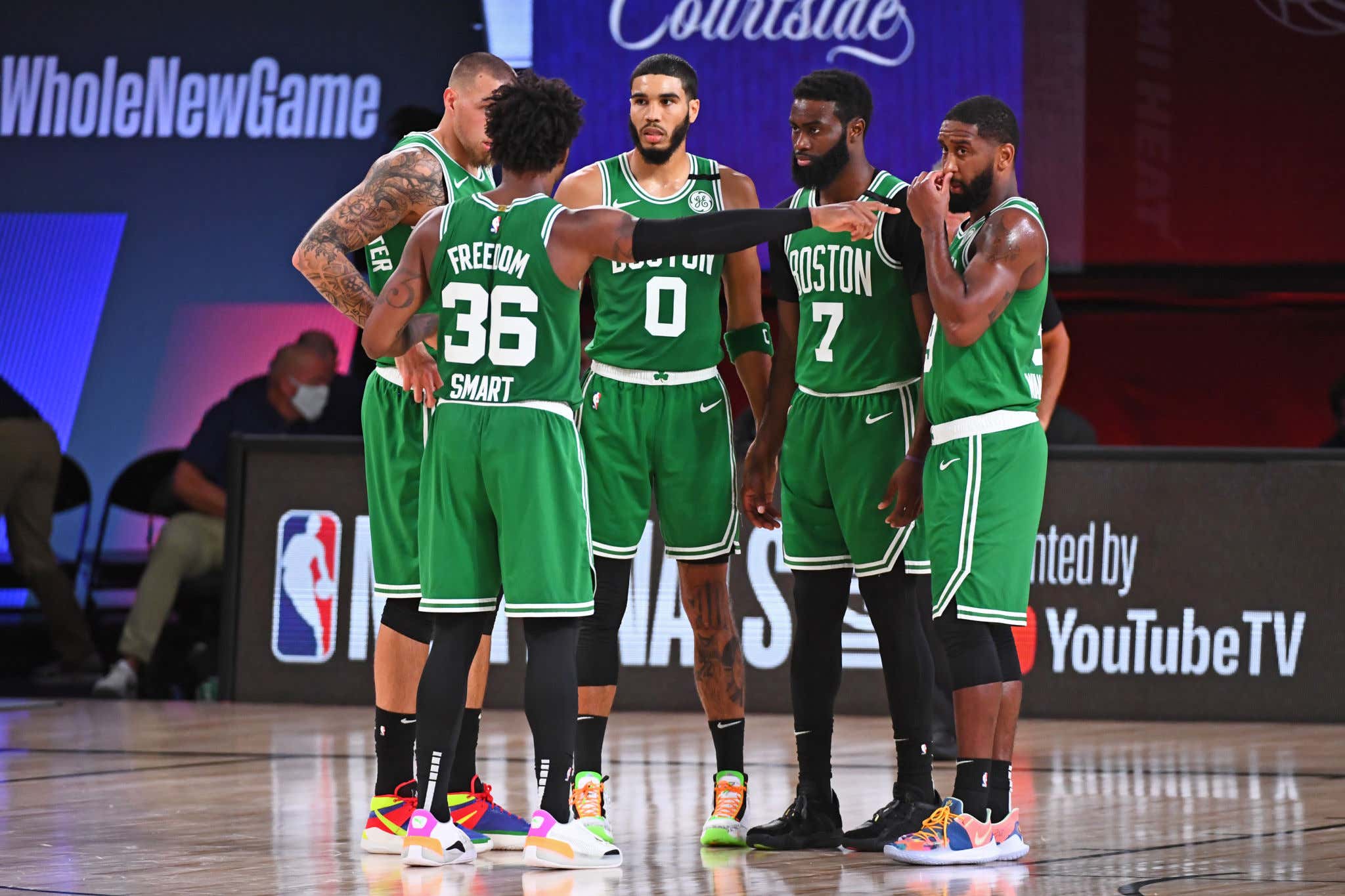 This team has forced us fans to live through a wide variety of emotions over the course of this playoff run. Elation, anger, frustration, confusion, you name it. Well, with the biggest game of their season last night, a chance to even up the series and shift all the momentum to their side while putting loads of pressure on the Heat, I'm really only filled with one emotion.

I'm not angry like I was after they blew a 14 point fourth quarter lead in Game 1 and a 17 point lead in Game 2. That was more rage. This time around, with a billion days off in between games, the Celtics put up another lifeless performance. They came out flat and played one of their worst first halfs in recent memory. They were careless throughout, especially in big moments. They played with no heart for a large majority of this game. That's really the only way I can explain it. Miami wanted this game more and it showed. You know how when your parents tell you they aren't mad, they're disappointed because they you know you better? That's me. I know this team knows how to play the right way. I know they how how to bring it on both ends. They didn't do it. With their season arguably on the line they looked like a completely different team than what we saw in Game 3.

Don't ask me to explain it. I don't know how the players wouldn't be motivated for this game. But the team I saw on the floor was not one that was playing for their playoff lives. They were sort of just going through the motions. God is that annoying.

So here we are. Down 3-1, the season on life support and nothing but pain running through our veins. Not just like we always do, we do not run from this. We don't hide on the blog and pretend it didn't happen and only blog the good times. I know it'll hurt, but we have to relive what we watched last night because that is our life.

- I really thought about skipping this section again. The more I thought about it though, because my feelings this morning are more disappointment and not a blind rage like after Game 2, I think we could all use at least one positive thing about this disaster. That would be the two Jays. Jaylen was actually pretty solid with an efficient 21/9 on 8-14 (4-7) and Tatum did eventually wake up in the second half. Oh we're going to talk about his first half, believe me, but I imagine there are other Celts fans out there that just need something positive right now

Everybody good? Can we move on to the real part of this blog now? OK great because you might want to get comfortable.

- In a big game like this, with your season on the line, you pretty much need everyone to play well. You knew the Heat were going to come out motivated after how Game 3 went, and for the first 24 minutes of this game no Celtic came close to matching their intensity. It was painful to watch really. Jayson Tatum had maybe his worst half of the entire season starting 0-6 from the floor with 3 TOs. He wasn't aggressive, he looked afraid to shoot the ball, something just didn't look right.

Despite all that, the Celts were still in the game, but we saw some early signs of what would be their biggest issue. They couldn't take care of the basketball. In the second quarter, where things truly started to slip away, the Celts had the same number of TOs (8) as FGM (8). What the fuck even is that. Jaylen had half of them by himself. You then add to it Smart's 1-5 from the floor and Kemba's 1-4, and it was the exact recipe for disaster you have to avoid. Turning the ball over, poor shot selection, no defense. Everything we all know they cannot do if they want to be successful, they did.

- When I say the Celts were't playing hard, this is what I mean

That wasn't the first time either that we saw this team unable to secure a defensive rebound. In fact, on two separate occasions the Celts actually got lucky with the Heat missing three straight threes on one possession. Rebounding is all heart and for whatever reason nobody wanted to show any.

- As we know, Tyler Herro went nuts. You may be wondering why Brad didn't try different matchups on him as it was clear Kemba Walker was having all sorts of issues. Well, it didn't matter who it was

It was Smart, it was Jaylen, it was Tatum, none of it mattered. These are your best defenders by the way and they laid an egg on that end.

- Rough night for Kemba on both ends to be honest. Offensively he was just 6-14 including a 2-6 second half performance, and then defensively he was a big time problem. That's sort of the issue with Kemba. The Heat did a great job of finding matchups of Butler vs Kemba which was a clear advantage, but if he's not going to be efficient offensively and give you that elite production, the defensive issues almost make him unplayable. It's a tough spot to be in.

But hey, at least he didn't turn it over!

- The biggest difference in this series has to be how different these two teams are in the clutch. The Heat are awesome, and the Celtics suck big old donkey testicles. I'm not even being dramatic either, that's just the reality of the situation.

As a team in this series, the Celts are shooting 31/7% in clutch situations. You break it down by player and holy shit is it a disaster 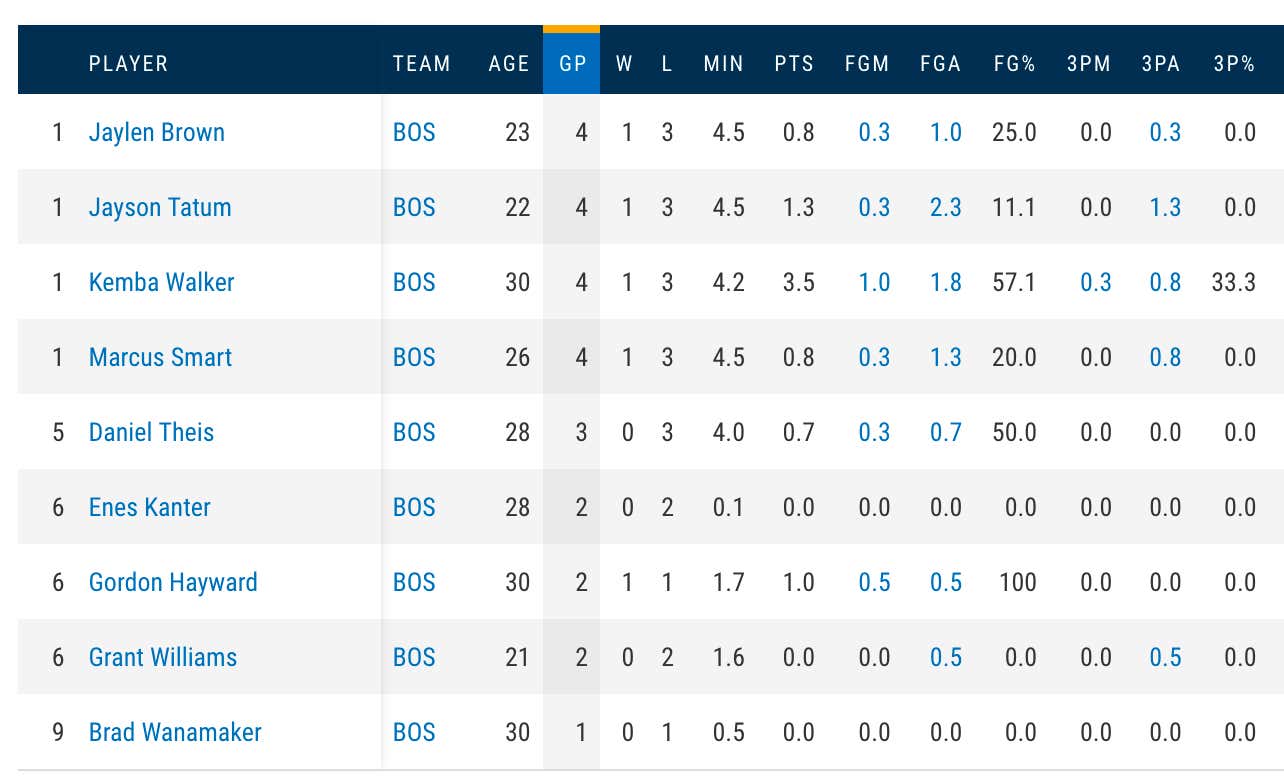 LOOK AT THOSE NUMBERS.

Kemba is really the only one doing jack shit in the clutch. That's a problem. Meanwhile the Heat had a 166 Ortg last night and shot 57% in the clutch. All three of their wins are a result of executing in the biggest moments. There's your series right there. This team has shit their pants in the most important part of each of these games. That is simply inexcusable.

- Let's talk about Brad. While this team looked much more prepared for the MIA zone and just missed shots, he doesn't escape this Game 4 loss without Brad. There was his decision to run with the all bench lineup plus Tatum in the second quarter that didn't exactly work. He maybe waited too long to unleash the Best 5 in an effort to maybe get a spark going. At no point did it feel like he was able to snap his team out of the funk.

While it's not on him that the players couldn't stop throwing the ball to the other team, it is on him to have them prepared and ready to play. I did not get the sense that they were.

- This team really needed good Marcus Smart, and for the second time this series they got the exact opposite. It's OK to tell the truth here. Smart was really bad. He wasn't the only one, but there's no denying that his fingerprints were all over this loss in the worst way. Once again he tried to do too much in the fourth quarter and none of it really worked. Poor shot selection with early threes may as well have been a turnover, and he had 3 brutal turnovers in his 9 fourth quarter minutes.

To me, this is where the game changed

As someone who rides and dies with Smart I understand this is just part of the ride, but I can't sit here and tell you his play wasn't a role in how this ended up. It just was.

- Which brings me to that fourth quarter. I knew right from the jump when Tatum found himself in no man's land and straight up passed it to the Heat that we were in for a disaster. Then Theis did the same shit. Then Smart did it. They finished with 7 fourth quarter turnovers and decided to play their worst defense of the game, allowing 35 points. You are going to lose to a good team every single time you do that shit.

It makes no sense. This is not a team that had turnover problems during the year, but they got into this series and they cannot stop turning it over. They have 64 turnovers in four games. The Heat have 45. There's your difference.

- When I say that the Celts only lose in heartbreaking fashion, I'm not kidding

It truly is remarkable. I'd rather just get blown out than keep losing like this. Just goes to show how terrible they've been in close games and how badly they've needed a closer. Guys who we thought could be that player, haven't come through.

So now they need a miracle. Not dead yet, but barely alive. All through self inflicted wounds which is what makes this position so hard to stomach. If this team just would stop playing like assholes, they probably aren't in this position. But the reality is they have no one to blame but themselves. This wasn't a ref issue, this wasn't any of that. When you choke away two double digit leads and then have 19 turnovers in the biggest game of your season, I'm not sure what else you expect. So goddamn frustrating,

That said, fuck it. Celts in 7