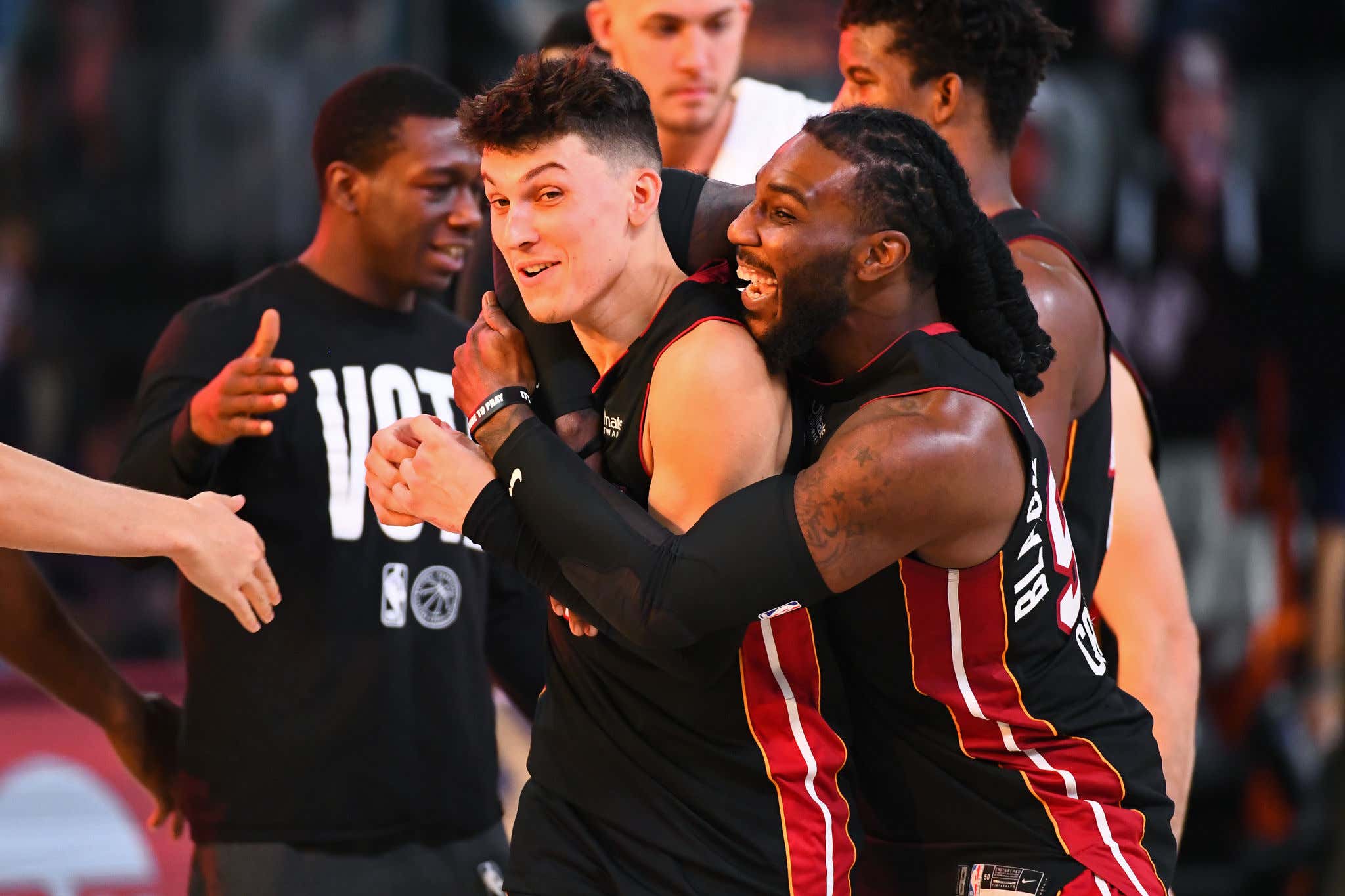 Good morning everybody happy Thursday and welcome back to another edition of Last Night In The NBA where we bring you up to speed on everything that went down from the night before in the Association. It was another massive bubble playoff game and once again we had a battle that lived up to the hype. Despite the fact that I am typing through the pain right now (credit to me), even I can't deny how awesome these games have been. These bubble playoffs have been all time as far as I'm concerned and we're not even at the finish line yet. If for whatever reason you missed another wild performance I suppose that's OK, just keep reading because here's what happened.

Rest assured we'll be diving into the Celts in their normal postgame blog, we will not be running from that shit. But for this blog we're going to dedicate it solely to the Miami Heat and their stronghold on this series after once again coming up in the clutch and executing at a high level. They are one win away from the NBA Finals and it has nothing to do with the refs or any of that bullshit. They have earned this position through solid play when things matter most. When the game gets tight they go up a level and it has been that way this entire series. This is a Heat team that saw the opportunity in front of them and they snatched it. Playing hard on both ends, making big shot after big shot in huge moments, there is nothing fluky about their 3-1 lead. They have been the better team through four games, there is no doubt about it.

So in Game 4, with the Celts looking to even the series up and steal momentum, the Heat showed up. They were locked in from the start, their defense was swarming causing 19 TOs, and they had about as balanced an attack as you'll find in these playoffs. A total of four players with at least 20 points, that was the difference. Jimmy Butler/Bam/Dragic/Herro were all fantastic and not only that, but efficient

Jimmy Butler was assertive early for really the first time this season. Bam was a monster on the glass with 4 huge offensive rebounds late. Dragic continued to do what he's done all series and make dagger after dagger shot late in the fourth. In a big game like this, those type of plays usually make the difference.

But let's not take too much away from Tyler Herro. The 20 year old had a historic night

The numbers frankly are ridiculous. 37/6/3 on 14-21 shooting (5-10) and a total of 17 points in the fourth quarter on 6-9 shooting (nice, but ya know…not nice). There was not a single thing the Celts could do defensively to slow him down. It did not matter who they put on Herro, he still gave them buckets

Sometimes you just have to tip your cap to a guy in the zone and that's exactly what Herro was. What makes him so dangerous is he's always attacking. When he comes off a screen you have to respect his floater/drive game and he has the basketball awareness to easily find the roll man. The crazy part is, the majority of his points were off isolation

I mean jesus. And sure it hurts extra because Pat Riley stole Herro the pick before the Celts in this year's draft. Why wouldn't it? Even with the Heat blowing their 12 point lead, you never lose confidence in them because they are so goddamn good in the clutch. Last night was no different. They shot 57/50% in their clutch time minutes in Game 4, and had a 166 Ortg / +50 Net rating. That's been the story this entire series. When things get tight they don't panic. They don't turn it over. They execute. That's what I mean when I say the Heat have earned every bit of this 3-1 lead.

So now they are 1 win away from the NBA Finals. The Celts have only come back from this deficit twice in their entire franchise history. They are going to need a miracle. They had their opportunities and blew two games with massive leads. This is what happens. The Heat have been one of the best teams in the entire playoff bubble, and last night was another reminder of why.