The 62-year-old actress revealed that her best on-screen smooch was with none other than her “Casino” co-star Robert De Niro.

Stone said kissing the now 77-year-old actor in their legendary 1995 mob film was so special because she was such a huge fan.

“It was the actor that I admired the most and my whole career [I] was like, I just wanted to be able to sit across the table from Robert De Niro and hold my own,” she said. “Maybe because I just held him in such extraordinary high regard and it was the pinnacle of the kissing moment for me.”

She had such a major crush on de Niro that he could have literally done no wrong.

“There was just so much attached to it, but I was just so madly in love with him … He probably could have hit me in the head with a hammer and I would have been like, ‘Oh yeah!'” she said.

As for the worst kiss she’s had during her acting career, Stone didn’t name any names, but did say that no other guy lived up to her snog session with De Niro.

“It was pretty fabulous so I don’t know that I could compare anything else to that,” she said. “Everything else was kind of like, meh.”

In what is news to absolutely nobody, Sharon Stone informed the world that Bobby D was the best fuck she's ever had.

To which I say, let's all act like adults here. Can we?

On what planet do you think THIS sex kitten -

gushes about being an obsessed fangirl about DeNiro, having a giant crush on him, and when she finally gets the chance to work with him, doesn't take full advantage of it?

If you don't think Bobby D carries a heavy dick game then you need to take a hard look in the mirror and do some serious soul searching.

Not to mention, Sharon played an absolute unhinged, borderline "worst female character in the history of movies" (which I covered in a special mother's day blog back in May). She's a MENSA member. Not only is she nails. But she's a genius as well. So it's safe to say she goes full method for her roles. 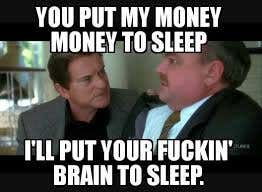 You do the math.

These two smashed. Sharon is straight class and didn't want to be crude. But Bobby DeNiro rocked her fucking world. Make no mistake about it. "No other guys came even close". Her words. Not mine.

In other news, it'll get dark tonight.

p.s. - No offense to the man, but we all know it definitely wasn't Michael Douglas, as he is famous for eating pussy. Not laying pipe. Very generous lover.