AJC - The Atlanta Falcons could only watch as they lost on a game-ending field goal.

They might not have been in that situation if their hands team hadn't just watched the trickling onside kick that put the Dallas Cowboys in position to pull off a 40-39 win — after being down by 20 points in the first quarter Sunday.

With three Atlanta players surrounding him and curiously watching the slow-rolling ball, cornerback C.J. Goodwin pounced on it just as it got to the 10 yards needed for the Cowboys to recover when they still trailed in the final two minutes. ...

“We’ve got to go capture it when the moment comes. ... From where I saw, it was a slow roller and one that we should make the aggressive move to go get it,” Falcons coach Dan Quinn said. ...

“The front three are usually blocking as the high bouncers go to the second side, so the front line, generally on an onside kick, they’re looking to get a block first, then the high hop goes to the next player,” Quinn said. “So when that instance happens and it’s not one that’s a high hopper you transfer in and you go to your ball. ... They definitely know the rule.”

Asked if any coaching changes could be upcoming, Quinn responded, “No," later adding that it's a situation that the Falcons often work on. 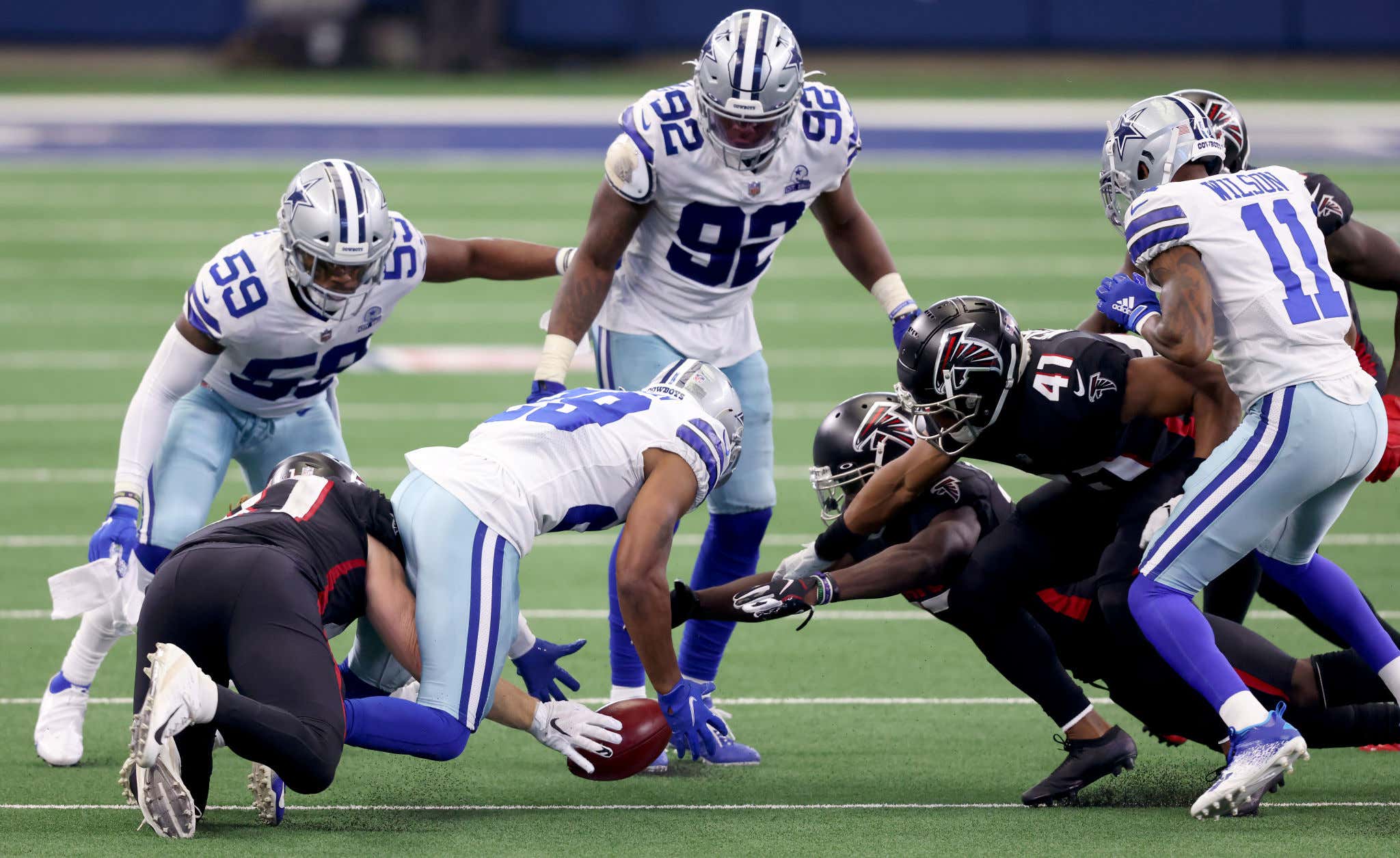 Simply put, Dan Quinn is a marvel. He's some kind of reverse genius. You almost have to be to be as smart a guy as he appears to be and yet still be able to be head of an organization that is among world wide leaders in stupidity year in an year out.

I mean nobody who watched the ending of this game believes that a group of grown men who understand the 10 yard rule would've stayed back, stood around and waited for it to go the place where Dallas could legally fall on it before they did a thing. Nobody. It's obvious to anyone with any given two of the five senses that in the moment a weird sort of groupthink took over. That en mass the return team mistook themselves for the kicking team. And so Quinn's explanation that they knew what they were doing was wrong and went ahead and did it anyway is an even worse indictment of his coaching staff than admitting they got confused.

And keep in mind, this isn't just the regular kick return team. Assuming his Falcons are just like every other team since the 1920 Akron Pros, they put in the "Hands" team. That sub-specialty unit of the specialty unit. The guys who are only out there because they're good at picking up a rolling, bouncing, spinning, yawing, tumbling football-shaped object. The mother of all "You had ONE job" jobs. So for them to know what to do and not do it is much, much worse. Claiming they suffered a mass hysteria or got taken over by a collective hive mind would get him off the hook better than this lie.

Like I said, Quinn doesn't strike me as a dumb guy. He was the architect of some of the best defenses of our times when he was in Seattle. His 2016 NFC champion Falcons were one of the most prolific offenses of all time. Both of which are hard to pull off if you're an imbecile. And yet every year his team is among the league leaders in unforced errors and situational unawareness. It defies all logical explanation.

All I can figure is that maybe he's a John Farrell type. A smart guy who can't articulate simple concepts in such a way for other people to be able to comprehend them. So Farrell would uses these long, technical explanations like "the downward rotation of his arm angle was causing an inconsistent release point and throwing off his extended landing spot for his forward foot" instead of "he needs to throw strikes." Maybe Quinn is like that and his description of the 10 yard rule just confused and frightened his Hands team to the point they froze.

But as the saying goes, when the student fail, isn't it really the teacher who failed? Since that Super Bowl Atlanta has gone from 11 wins to 10 to seven for a couple of years to 0-2 and some of the most inexcusable losses of the 21st century. And I don't know how he survives another one like this.