For some reason, parenthood seems to be universally synonymous with disappointment. At least that's the way it was for a while. Whether it be from pop culture or real life experiences, it’s been ingrained in our heads that children are essentially bred to disappoint their parents. If you think about it, it’s one of the more bizarre phenomena of human behavior. The birth of a child is widely considered “the best day” of a parent’s entire life, and as that kid ages, the societal baseline quickly turns to despising your child's passions and interests, being let down by their academic and/or career path, and being disgusted to some degree by their overall values and behavior despite being the one responsible for creating, raising, and influencing them.

But perhaps the most prominent example of parental displeasure comes with the modern son not living up to his father's expectations of him as an athlete. Go to any given youth sporting event and you’ll find, at minimum, a wide range of disappointed fathers exhibiting one of the five stages of grief when it comes to their son’s athletic abilities, or lack thereof.

This father can be seen walking around with a fake chip on his shoulder while pompously sneering at the illusion of his "sufficiently talented" son getting a "raw deal" from "the system" that is local pewee sports.  He blames things like politics, nepotism, and corruption on his 9-year-old kid’s lack of playing time. And when his lousy seed does get in the game and inevitably underperforms or miserably fails, the blame is shifted to the referees, umpires, teammates, and environmental elements. In his mind, his son, despite sharing the DNA of a wobbly manlet, IS a good athlete and WILL be a star. He just needs to be treated fairly.

This father can no longer emotionally handle his child's athletic failures, so he devolves into an overgrown, sleep-deprived baby who throws temper tantrums at public events. His size 8.5 New Balance 608 Trainers are covered in grime and grass stains because he kicks the ground every time his son makes an error or misses an open field tackle, which is often. He doesn't know who to lash out at, so he picks everyone. Ivory white beads of saliva build up around his Skoal-filled mouth while he screams at the top of his lungs at his hopeless child and picks fights with opposing parents in manners that would make Napoleon chime in with "chill."

Lost in the stupor of delusional desperation, this father pathetically resorts to bribery in a last ditch effort to motivate his child with something more extrinsic than a plastic trophy. Ironically regressing to the logical reasoning skills of a toddler, the grown man maniacally pleads with his own little boy to be good at sports — to win the match or get one measly base hit — and if he does, he’ll be rewarded with any toy or video game console he wants, even though the only thing that sad sap craves is the intangible love and respect of his daddy.

This father is grappling with the mental monster that his son might just fucking suck at sports and, just like his own self, will never amount to anything even remotely mediocre in athletics. With his chins down, the 5’5” balding, bowlegged heifer dejectedly paces back and forth in the hallway of the gym or behind the bleachers, wondering “where did it all go wrong?” with his son’s athletic career.

The dream of being a vicarious jock is finally crushed for this particular father. And the prospect of having a son who’s a sports star is usually replaced by a different passion, like chronic alcoholism or a gambling addiction or a long-winded, fiery divorce. I would say that this is when he finally gets to experience peace, but that won't happen until his body slowly and painfully deteriorates and he passes away to the dismay of no one.

Bottom line is just give up on your kid's (or future kid's) sports career now. Besides, Youtubers and Tik Tockers make more money than NFL players. It's not worth it. Go to the bathroom right now, stand on your tippy toes, and look at your dumpy, asymmetrical reflection in the mirror. Now sincerely ask yourself, “Is this person realistically capable of creating a star athlete?" I know I'm not.

Okay, now onto the real point of writing this blog.

The Most Disappointing Children of All Time

This past weekend, I got the opportunity to appear on the Lights Camera podcast to participate in a snake draft of the most disappointing children (fictional or nonfictional).  While brainstorming my top picks, my mind initially went to Adam and Eve’s oldest son Cain. He was the first child of all time, and he still managed to commit first degree murder. Like, he had zero exposure to violent crimes and his idea of "heinous sins" was nothing more than consuming delicious fruit. And he still went and brutally slaughtered his own brother, leaving his parents to simultaneously grieve the loss of their youngest son and cope with the haunting realization that their only living child is a hideous monster. That has to be a top five most disappointing child, right?

But then I did a 180 after realizing the inherent coolness of being the original killer: the first person to ever use brute force to slay another human. That's one of the more alpha labels that a man can have if we're being completely honest and masculine. So, could it actually be Abel who's in the running for the most disappointing child of all time? The boy who had the privilege and opportunity to roam the earth before anyone else and still got beat to a bloody pulp with a puny stone? This conundrum drove me to do some researching and....

Are you kidding me? There was a third child named Seth? Fucking Seth? I grew up in a church-going family and attended Catholic school for 11 years and never, EVER remember hearing the name "Seth" mentioned, even in passing. “Adam and Eve” and “Cain and Abel” were as ubiquitous as [fill in the blank] in Catholicism, but the story of Seth — the boy who was “chosen by God” to replace Abel — got less action than [fill in the bank with any legal, consenting adult] at Catholic churches across the world.

How are you a top 5 human of all time (chronologically) but not even a top 100 Seth of all time (in terms of fame)? His only "legacy" seems to come in the form of expert-level Crosswords, solely because the letters of his name are conducive to word puzzles. Seth Curry gets more name drops at bible studies than him. Seth from The Pacifier gets more playing time at seminaries than Seth from the Book of fucking Genesis. 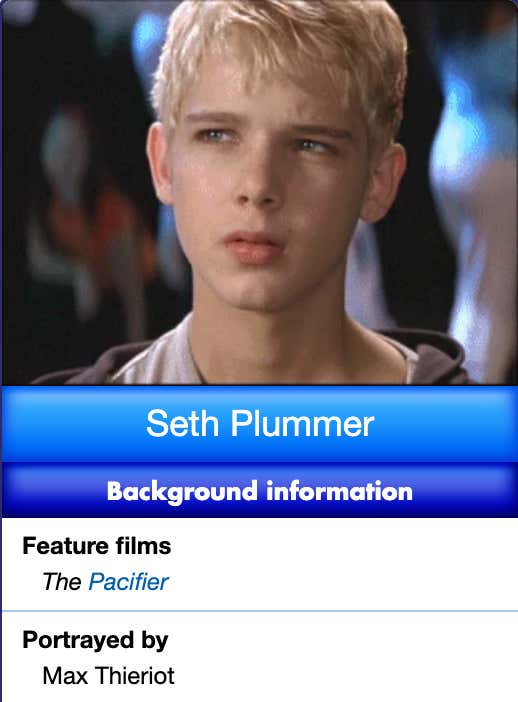 And it’s not like Seth was some kind of disgracefully disabled mutant like King Tut's flat-headed, club-footed virgin ass.

Seth was tall, handsome, and he fucked [raw] and [to completion] at least 56 times. Not quite sure how he reproduced in a world with only immediate family members, but nevertheless, he fucked frequently. And to say his cream pies were unsuccessful would be the ultimate understatement. 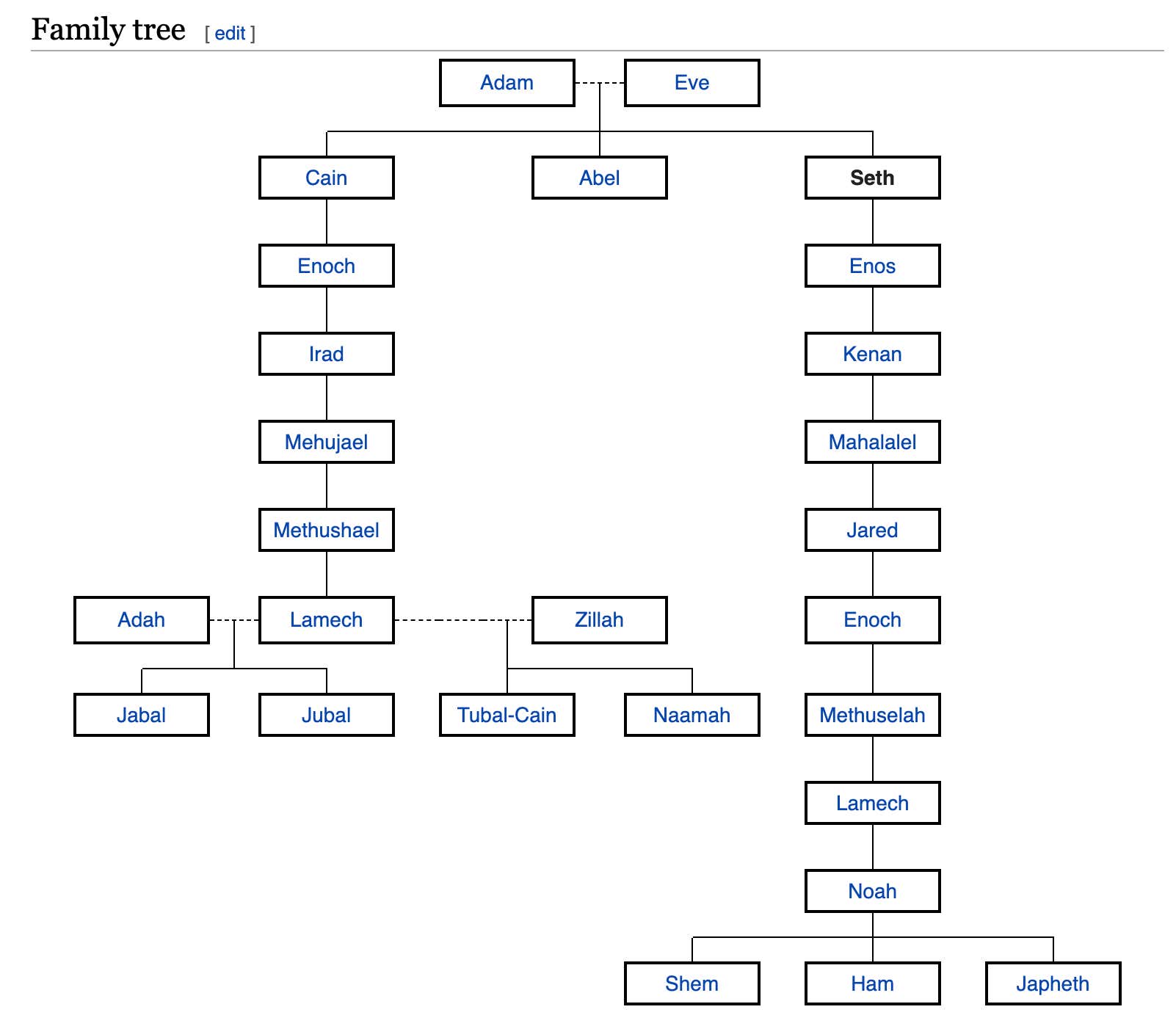 Take a look at that lineage. Seth is ancestrally responsible for a biblical personality named Ham and he still doesn't get any spotlight? Fucking Ham? Did Nick and I write the Old Testament?

And while we're at it, this fella named Ham, which is conveniently pronounced "Ham" in Hebrew, is the father of someone named Cush? Fucking Cush?

I'm veering off track here, but my point is that Adam and Eve's son Seth may be the single most disappointing child of all time, when comparing the legacy he should have to the legacy he does have.

He even has an entire religious sect named after him and still doesn't get a crumb of credit on its Wikipedia page. That's like saying "the exact origin and founder of the LeBron James Scholarship Foundation is still unknown."

Where's the respect for Seth?