Exploring the nooks & crannies of whatever city I'm in & then acting like a know-it-all when friends come to town is a top three feeling for me. Whether it's NYC, San Diego, Philly.. pointing at stuff and saying, "Now, did you know..." just gives me a lady boner; don't know why.

Classic example, Chaps & Cons during Army/Navy game week. Year after year they can't turn a corner without me rambling on about the Mummers Parade or dragging them to some festival or food spot..

So here I am to do that for the guys down in The City of Brotherly Love with Barstool's Sportsbook app (and for every person who DMs me saying, "I'm in Philly for work next week - what should I see?!").

It's too much to cover all the best stuff, so in this particular itinerary I pick out a couple things in 3 areas... Center City, Fairmount and Passyunk/South Philly. It's manageable for one day with plenty of room for side-tracking & bar stops. Also, I realize COVID affects things, but I went about this in a dreamlike state where everything is fine and normal, and all this stuff is open now, though with restrictions & extra rules.

Yes, it's a big time tourist spot, but Reading Terminal Market is so good that even the saltiest of locals are willing to look past that. Right in Center City since 1893, it's one of America's oldest, largest indoor public markets. Anything & everything you could ever have a hankerin' for is there.

When I worked across the street at the Convention Center I loved disappearing into the warm, neon-lit maze of aisles & drool-worthy menu display cases on my breaks… A DiNic's roast pork for lunch topped off by a 4th Street Cookie with an Old City Coffee and I was ready to face the crowds at the National Proctology Expo again.

Split up the squad to get an assortment of the following haul:

Beiler's Donuts: Guaranteed win for donut aficionado, Big Cat. The line can be long but it's worth it & moves fast. You can't go wrong but I highly recommend the maple bacon, vanilla fruity pebble & chocolate glazed cake.

Miller's Twist: Consider it the Rolls Royce of 'Amish style' soft pretzels. In the mornings they'll stuff fluffy eggs, melty cheese and whatever kind of meat you fancy in pockets of golden, buttery dough baked to perfection. If you're too hungover for that I've found one of their top notch milkshakes & a plain pretzel sets a solid base for recovery.

Smucker's Meats: Perfect comfort food staples like pork roll or scrapple breakfast sandwiches on the best rolls around. (I always add salt, pepper, ketchup & hot sauce to mine. Brandon Walker would probably add '7 more layers of meats & cheese' to his.)

From Reading Terminal it's a quick walk over to City Hall, one of my favorite structures on the planet. The largest municipal building in the US of A, this sucker takes up 14.5 acres of floor space right in the heart of Philly AKA Center City.

With Willy Penn watching over us from his 548 ft. tower it's our hub & heart, and it's worth doing a lap around & through the courtyard in the middle. With every step you'll notice a new detail in the masonry work, and don't forget to appreciate the height of the gates that Birds fans stormed over (with kegs, no less) when we won the Super Bowl.

Personal bonus: I once saw Jesus walking on wooder there whilst en route to happy hour.

Right around the bend & down an alley is McGillin's Old Ale House, and since you have a solid base from breakfast you might as well stop in for a quick pint.

McGillin’s Olde Ale House threw open its doors the year Lincoln was elected president. That’s shortly after the Liberty Bell cracked and long before ground was broken for Philadelphia City Hall. The beer taps have been flowing since 1860 — making it the oldest continuously operating tavern in Philadelphia and one of the oldest taverns in the country.

It's a classic no-frills, old-school bar and they have a solid selection on tap, but try one of the house beers first: McGillin’s Real Ale, Genuine Lager or 1860 IPA.

One time I dragged Frances Ellis there after a stand up gig and immediately lost him in a swarm of jovial bros on the second floor. Either that or he ghosted because I'm socially awkward.. Late nights always feel like a party there (at least during non-COVID times, sigh) but I've been at all times of day with different groups & the vibe is consistently good. 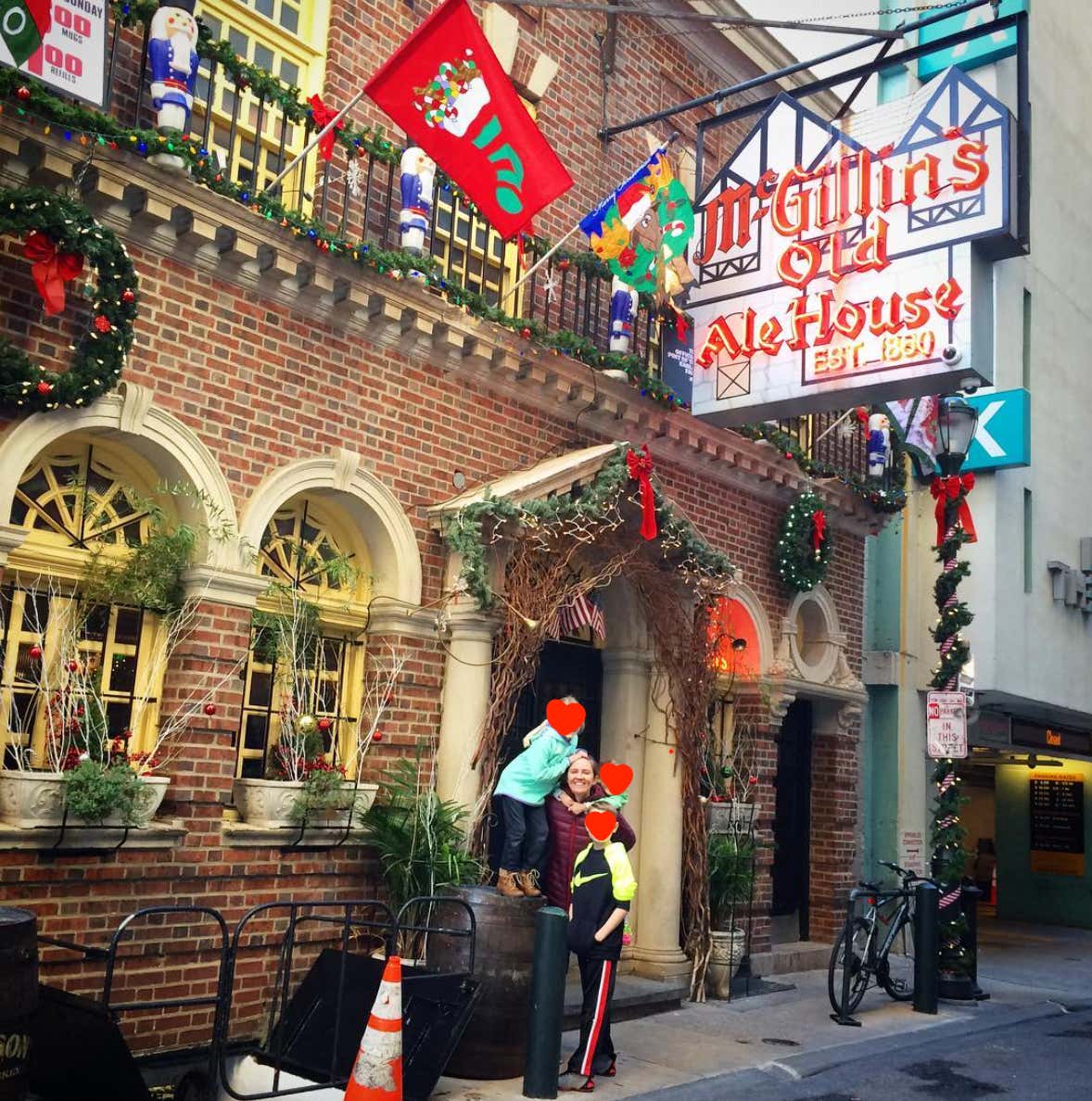 Take cab here from McGillin's unless you're up for a longer walk.

Seeing as we're hitting Fall temps & Halloween is growing near, what better place to hit next than the sPooOoOoky halls of Eastern State Pen? Explore the ghostly, crumbling corridors where convicts toiled from 1829 until 1971, visit the cushy, VIP cell where Al Capone spent eight months in 1929, and see where I took a date who I got upset with for not being interested enough in our headphones-guided tour voiced by Steve Buscemi.

On Bastille Day every year Eastern State used to have a show with people dressed in French costumes like Marie Antoinette, and they'd throw Tastycakes down at a crowd of hundreds outside the prison while shouting, "Let them eat cake!" It was a huge party & the last time I went (slightly hammered) I ran into Barstool Jordie while trying to catch Butterscotch Krimpets. A Delight.

Weird facts - A dog named Pep was sentenced to life at this prison for murdering the cat of the governor's wife (#FreePep), twelve inmates once escaped Andy Duphrane-style through a 97 foot tunnel, and around 30 other tunnels (incomplete) were discovered during renovations.

The neighborhood it's in (Fairmont) has lots of cool bars & restaurants to check out so find some lunch while you're there.

5. Philadelphia Museum of Art (just the outside grounds)

Maybe you're too cool to pose with the Rocky statue & then run up the stairs humming "Gonna Fly Now", but you can still slowly huff up the 72 stone steps as your knees crack & then turn around for a beautiful view of the parkway looking back towards City Hall. If you're lucky you might see a rogue dirt bike squad or dune buggy screeching along behind you.

Walking around to the other side you can see Boathouse Row on the Schuylkill (Skoo-kull) River (you know, from the Always Sunny intro), another cool view of the city skyline & the Fairmont dam & old waterworks buildings. There's all sorts of little trails & spots to explore. 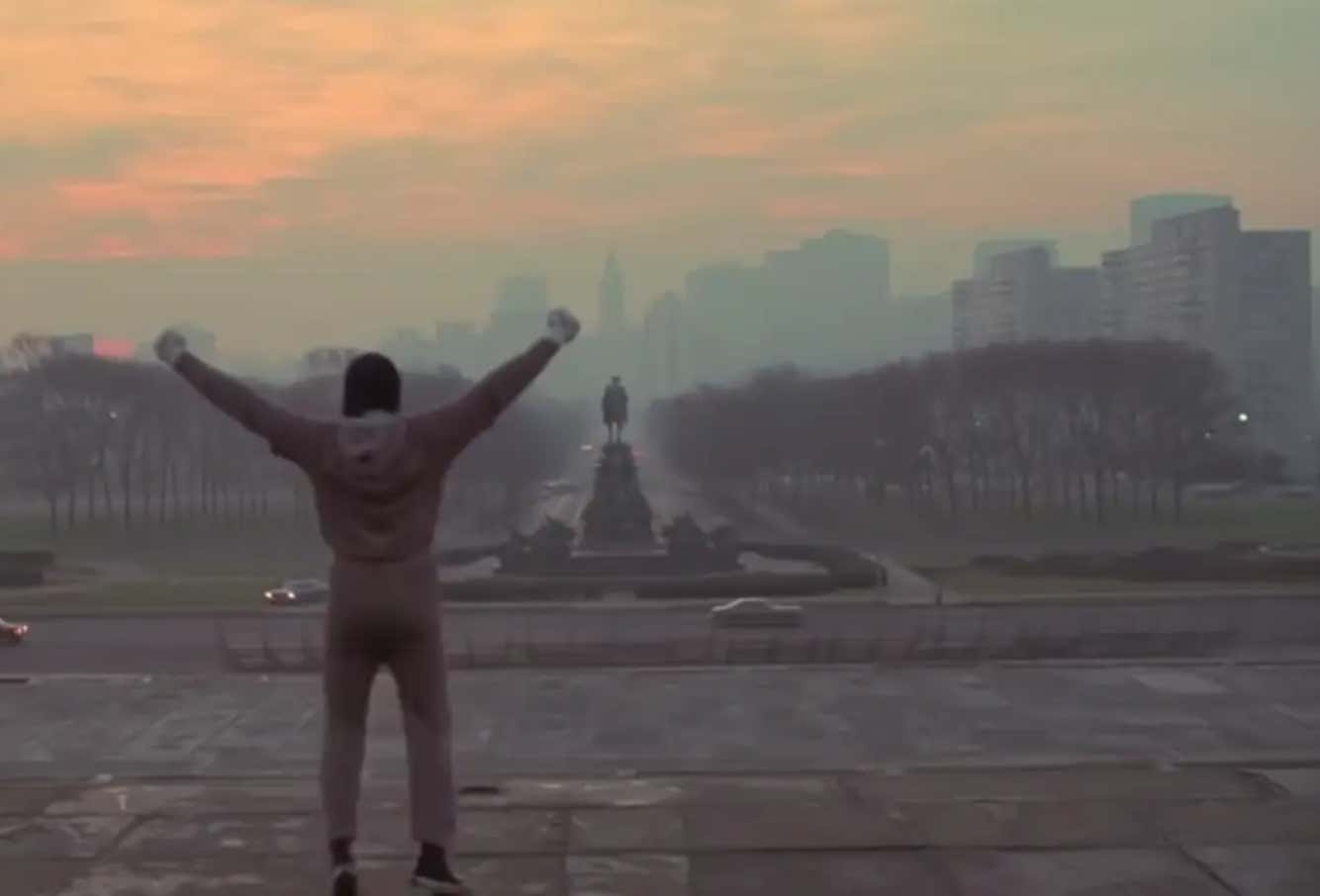 Hop a cab from the Art Museum to the Magic Gardens, otherwise it's another long walk.

There's three key locations I take people on South Street. Here they are in walking order:

6 cont.. Philly Magic Gardens: You'll know it as soon as you see it; the work of artist Isaiah Zagar who's been using handmade tiles, bottles, recycled materials, mirrors, etc. to create mosaics that 'chronicle his life and influences' since the 1960s. You have to get tickets ahead of time if you want to wander the maze-like halls, tunnels, courtyards, stairwells & more that weave through their lots, but even walking by, peeking in and then exploring the adjacent South Alder St. to see other cool murals & works of art is a unique & worthwhile venture. Especially if you're with someone who cares a lot about the Insta life.

7. Tattooed Mom - A couple blocks down South St. is Tattooed Mom's. It's a fantastic dive with seriously good bar food, fun specialty drinks & little bowls of Dum Dums & toys sprinkled around. Since it's COVID szn they have a great selection of 'to-go' drinks in Capri Sun type packaging for strolling along. (This is yet another spot I've dragged Chaps.) Top 5 favorite bar in the city for me. 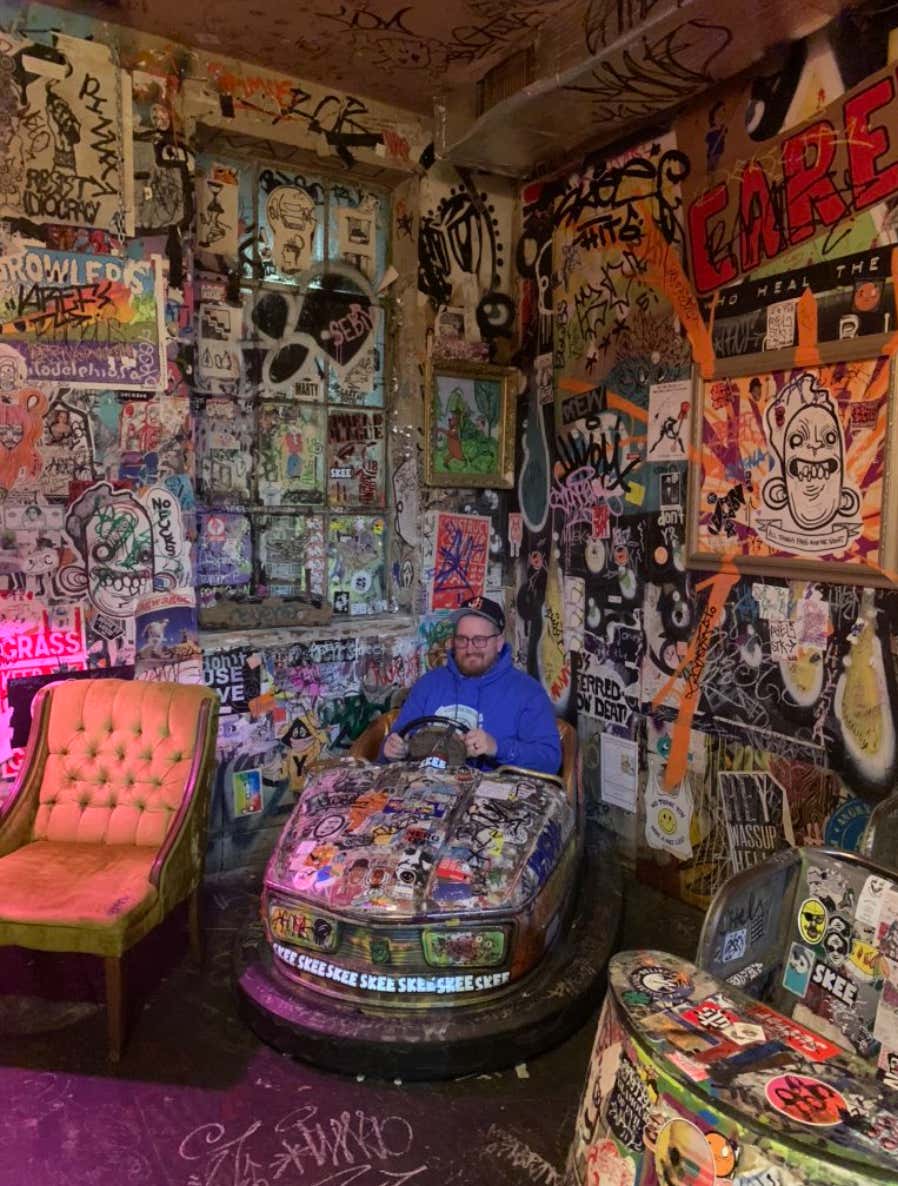 8. Jim's, South Street - Grab a to-go brew at Mom's & head a few more blocks to my personal favorite of the bigger cheesesteak joints, Jim's. Pat's & Geno's (if I have to choose I go Pat's) are still fun if you're touring around but I've consistently had some of the best cheesesteaks of my life at Jim's.. The kind where you take a bite & then have to stop, look up at the heavens & appreciate it for a few seconds before you take another chew. For me it's onion & extra wiz & then I add a bunch of ketchup. The sloppier the better. If you go around peak hours there's going to be a line. I'd say wait.

Walk off that cheesesteak with cannolis in mind as you head to America's oldest continually-operating outdoor market, which you also might recognize from that Rocky running scene.

Over several blocks there's tons of small businesses where inside & out you can find all sorts of specialties. Meats, cheeses, chocolates, seafood, whatever you're into, the very best are making it right here. Whichever country you hail from they've got your fruits, veggies, ingredients fresh & ready to go. It's great window-shopping & people-watching from the shoppers to the artisans working their crafts to the little old ladies at the registers. If you're a tourist who wants to bring gifts back home this is the place to do it.

10. PAT'S & GENO'S - I know this one will get the obligatory, "Pshh, why'd you put this on here? They both suck, idiot," responses, but I'm putting 'em on the list because so many people ask me about it and if you're not from the area then goddamnit, it's fun to see. Rival spots; colorful, greasy icons peacocking directly across from each other with neon lights & signs & knick knacks… One claiming to be thee original the other claiming to be thee best.

Plus there's some good bars around to finish off the tour if you're already too stuffed at this point. The Passyunk area is one of my favorite spots in the city.

Some of the bars near Pat's & Geno's are:

Ray's Happy Birthday Bar - The late owner used to wish passers-by a "Happy birthday!" knowing that eventually it would be someone's birthday & they'd be blown away that he guessed it… Since then this dive has morphed into:

..a year-round birthday party where the guest of honor changes day to day. For your birthday, they ring a bell and give you a goofy hat and cake-flavored vodka in a special, cupcake-shaped shot glass with a candle in it.

Garage - Skee ball, a great beer selection (over 150+ cans) and a tiny food kart inside with revolving chefs/restaurants taking over. Stumble across to Pat's for cheese fries after.

Here's the exact itinerary in order on Google Maps if you want to follow it for yourself or check out the spots I picked, and to see all the events/happenings the week you're in town visit uwishunu.com. 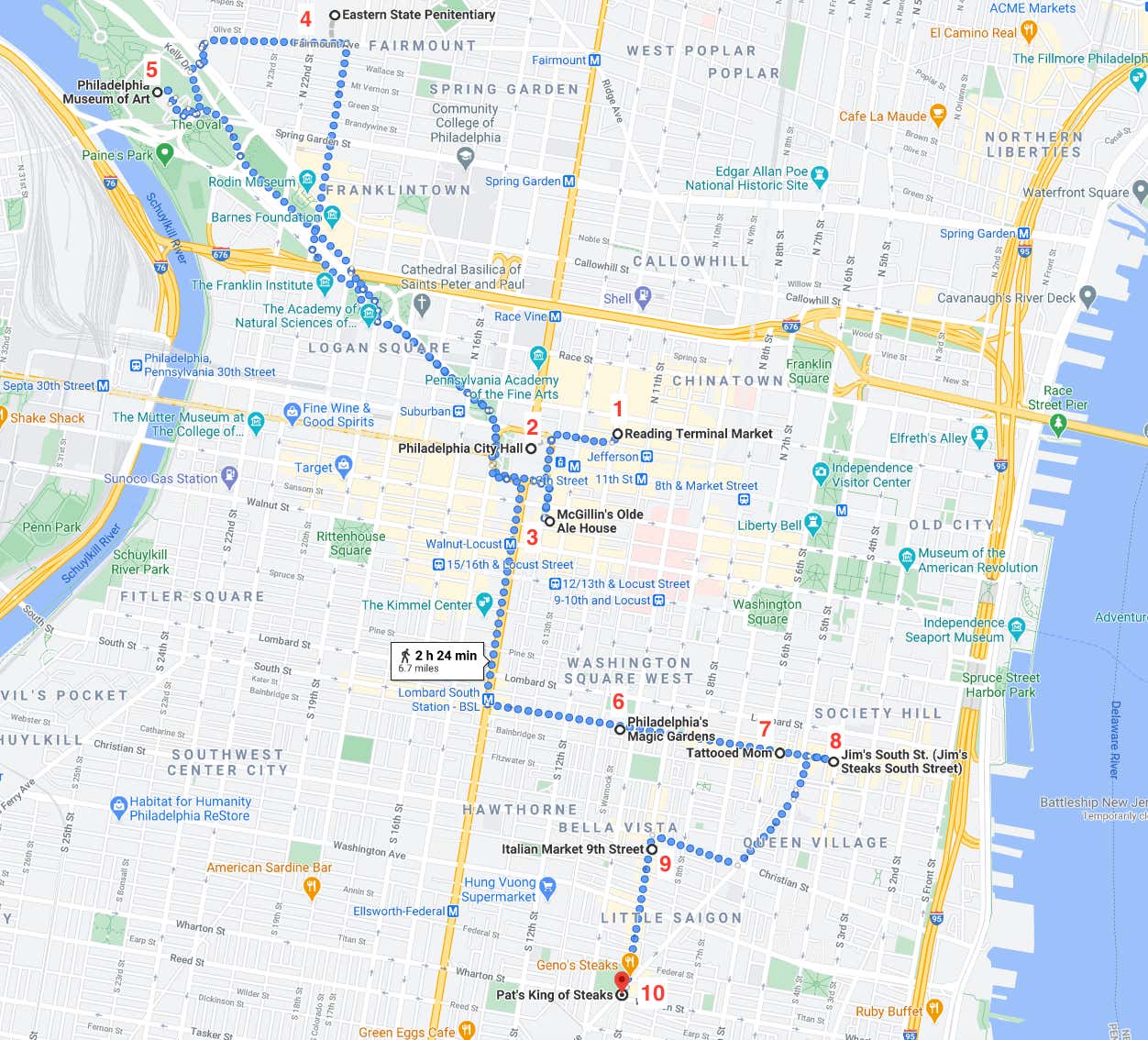 As you can see from my map path there's huge swaths of the city I missed that are equally deserving of attention, and so many great breweries, mom & pop shops, pop up booze gardens & restaurants that I didn't shout out, but one of the best parts of traveling is dipping out on the itinerary & making your own way, too.

Top notch experiences to be had all over Philly, and ok, the guys will probably be too busy crushing it on the Sportsbook to humor me, but maybe you'll run into Dave doing a pizza review or Ben Franklin giving a historical tour.

If you have any suggestions, criticisms or must-adds for this suburban outsider let me know, but pls only be a scumbag about it if you're actually from Philly.