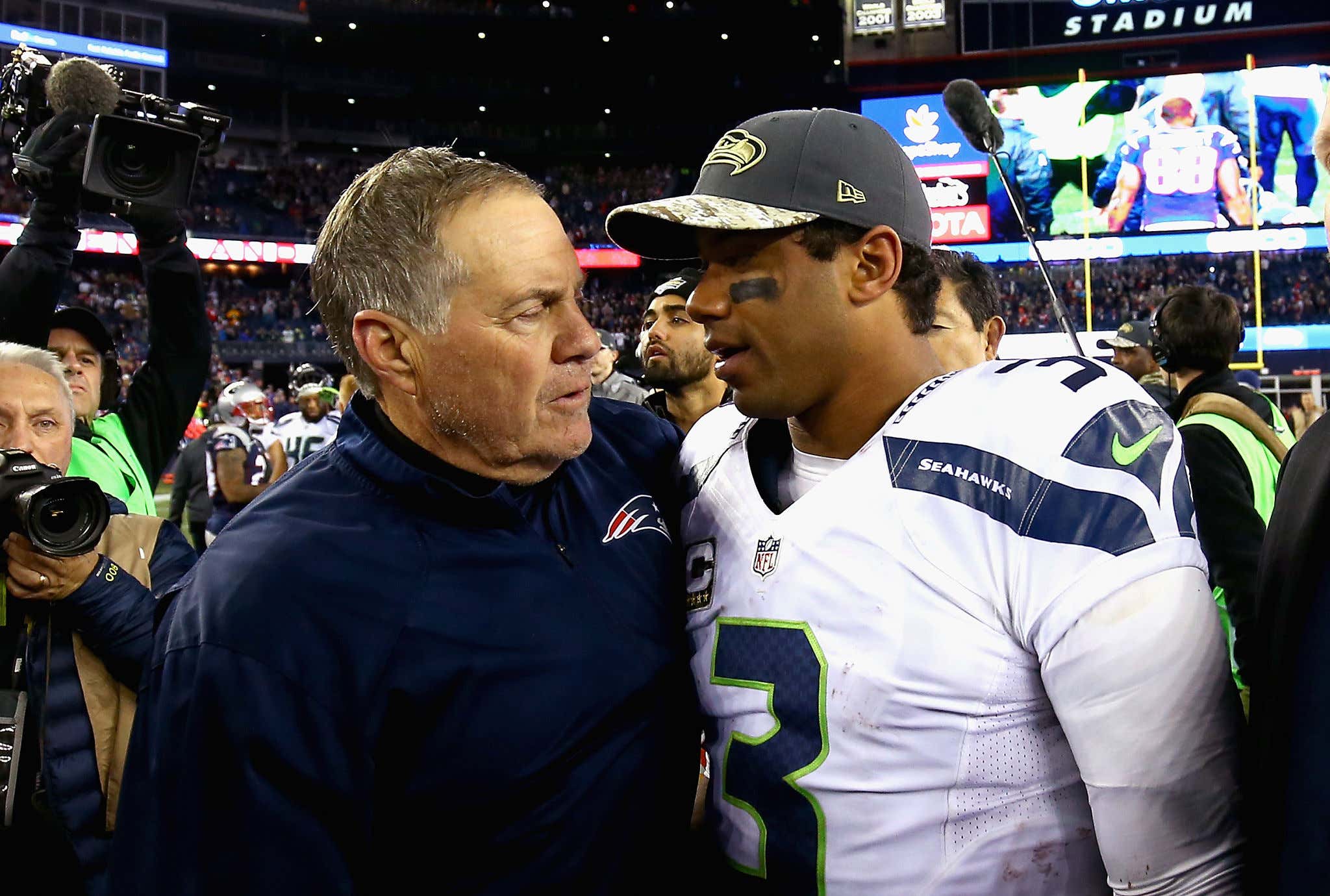 Like I mentioned earlier in the week, the Patriots are in the unfamiliar position of being underdogs for just the second time in the last four seasons. And with the Seahawks at -4.0, this is the most points they've gotten since September 11, 2016 when Jimmy Garoppolo made his first career start at Arizona.

Making matters more difficult is that Russell Wilson is coming off his Offensive Player of the Week performance against Atlanta. A game where Matt Ryan threw for 450 yards and two touchdowns and was still the second best quarterback on the field. And it wasn't close. Thanks to Wilson's line of:

Those are great numbers if you're in 7-on-7s in helmets and shells. Against the defense of a supposed contender after the SparkNotes version of a regular offseason program.

Anyway, to my point, Bill Belichick was asked about Wilson in his press availability today:

Q: You touched on Russell Wilson a little bit. In what way does his skillset stress a defense?

BB: Well, yeah, everything. I mean, this guy's a tremendous player. Honestly, I think he's in a way maybe underrated by the media or the fans, I don't know, but I mean I don't really see anybody better than this player. He can do everything. He's got obviously great leadership, playmaking skills. He plays very well in the most critical situations in the game – his decision-making, running, passing. His passing numbers are extraordinary. You could put him up against anybody since he's been in the league, literally anybody, in any category, really. His winning percentage is impressive. He’s there for every game, never missed a game. He's got a great, great ability to do the right thing at the right time. He has tremendous vision and sees the field extremely well. I don't think there's a better deep ball passer in the league in terms of decision making and accuracy. He attacks every – literally every inch of the field you have to defend with him – the deep balls, the sidelines, his scrambles, his ability to get the ball to his playmakers and in space, and then you have to try to tackle him, which that’s very difficult too. … I mean, they have a lot of good players that are hard to handle and you put them all together and it's orchestrated by Wilson. They're very, very hard to define.

I'll just state what we're all thinking, which is that of all of Belichick's many, many, polymath-like geniuses, none exceed his ability to talk up an opposing player. I've heard him describe the likes of Rex Grossman and Matt Moore and make them sound like they're 1994 Steve Young or that he was on their agents' payrolls.

This is not that. This is Belichick being candid and honest. And, while this shouldn't come as a shock to anyone, I couldn't agree with them more.

To say Patrick Mahomes is the best quarterback in football right now is such an obvious take it's not worth the pixels it takes to type it, other than to segue into the point that Wilson is the second best. And has been among the best really since his rookie year. Aside from one 9-7 season he's had double digit wins every year. In his eight seasons he's had a passer rating of 100+ five times. He's led the league in passer rating once, he's led the league in TD passes once. Yes, he takes a preposterous number of sacks. But like Belichick said, he's never missed a game. And even while leading the league in sacks last year, he also led in 4th quarter comebacks with four and game winning drives with five.

To his point about deep balls, last year he had the second highest percentage of passes over 20 yards in the air with 16.5%, behind only Matthew Stafford. And his passer rating was fourth, with 119.2, which was a tidy 32.3 higher than Stafford. On top of that he can run, scramble, extend plays and throw on the run with anybody.

He'll always be defined for one bad decision/execution that kept him from being the QB on back-to-back champions and maybe the MVP of Super Bowl XLIX, and that is on his permanent record. But never forget the way the Patriots kept him bottled up for the first 20 minutes or so of that 1st half and then he went off the rest of the game. How he drove the Seahawks 80 yards with 0:31 left in the half to send the teams into the locker room tied at 14. And how when he got the ball on his own 20 with 2:02 left down by four, it took a brainfart by Pete Carroll and the clutchest play in NFL history to keep him out of the end zone.

You can forgive Belichick and me for being so much in awe of the guy, given that it's human nature to go by what you yourself have seen. These are Wilson's numbers from the three times he's faced New England:

Say what you will about Drew Brees and Aaron Rodgers or whomever. But prior to Mahomes bursting onto the scene, if I could've had one quarterback other than Tom Brady from 2012-19, it would've been Wilson and it's not even close.