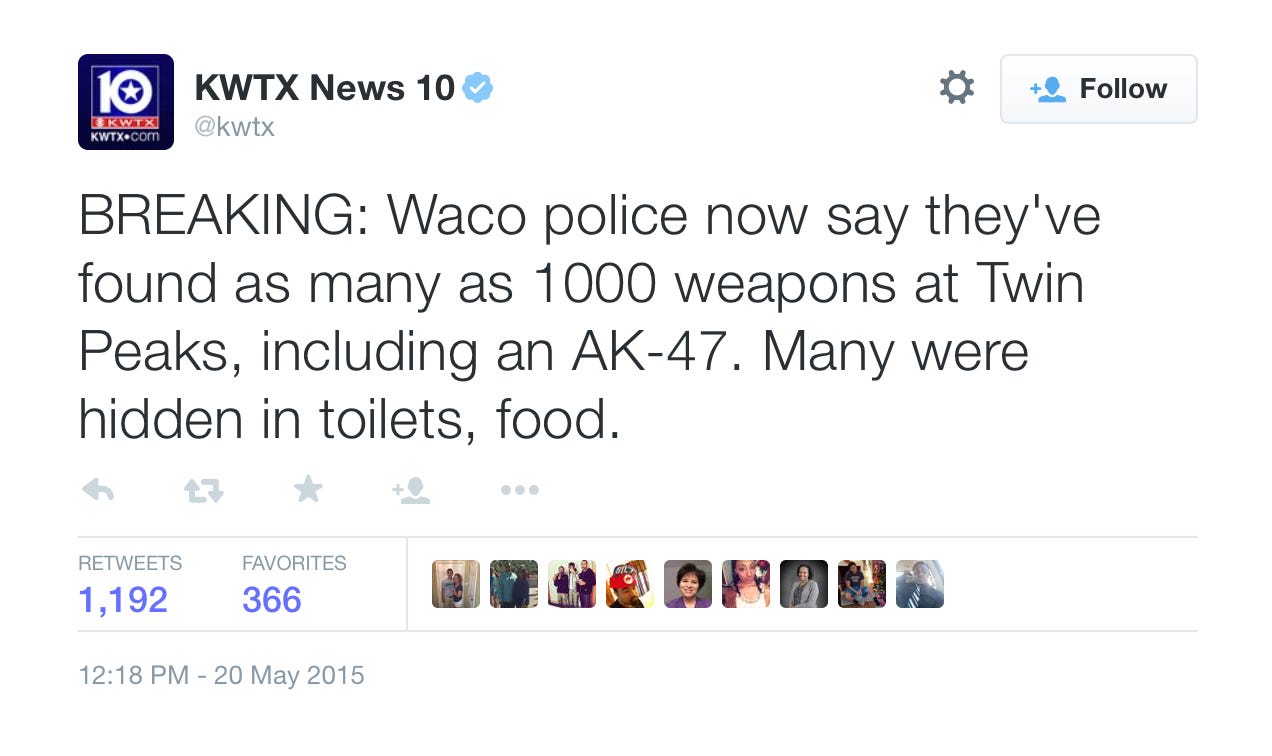 The Guardian- As many as 1,000 weapons were found at the Waco restaurant where nine bikers were killed during a mass fight between rival motorcycle gangs, police said on Wednesday. Investigators recovered items ranging from pocket knives to an AK-47 rifle, Waco police spokesman Sergeant Patrick Swanton told the Guardian. Gang members rushed to get rid of their weapons, he said, as gunfire erupted and police moved in to the Twin Peaks restaurant in the south of the city last Sunday. They were found “stuffed in toilets and hidden under seats”, he said. One firearm was discovered in a bag of tortilla chips, while a knife was located in a bag of flour. Brass knuckles, bats and chains were also unearthed. Swanton said that the inside of Twin Peaks was a “pretty nasty scene” with “blood spatter everywhere”, especially in the bathroom.

I’ll tell you what, I’m fascinated by this story.  Partly because I was a huge Sons of Anarchy fan and I miss it.  And also because I don’t think I realized biker gangs were actually a thing?  Like when I was watching Jax Teller and his gang tear up Charming season after season I just assumed they were making shit up.  No way could it be true.   Well, the blood-stained walls of the Twin Peaks restaurant in Waco proves that they weren’t joking.  The 9 dead dudes probably think it’s pretty real.  The 180 guys in cuffs probably think it’s pretty real.  This is real and I couldn’t be more interested.  Did you see the mug shots of all the guys?  They looked exactly how I wanted them to look.  Just a bunch of bearded white dudes who wouldn’t hesitate to rip your eyeballs outta their sockets.  Say the word, no more eyes.  Done.  And now this latest report that they found over 1,000 weapons in the restaurant?  AWESOME.  Coolest shit ever. Shoving pistols into bags of flour.  Flushing knives down the toilet.  Some genius even put his gun in a bag of tortilla chips.  Like he’s thinking, “Shit! Cops are here.  Oh well, I’ll just shove this pistol in the Tostitos bag.  No way they’ll find that.  9 people dead? I’m guessing they’ll give this place a good once over. Nothing more.” I might quit the blog life and join a motorcycle gang. That’s how interested I am in this story.