Let me first say, part of this story has to do with the controversial topic of defunding the police, but this blog isn't about that. This story is about something that everyone can agree on: you don't fuck with people who handle your food, especially when they're craftspeople and entrepreneurs that dedicate their lives, money, and passion into one of the most risky and thankless industries just so that they can see the look on your face when you bite into their delicious food. 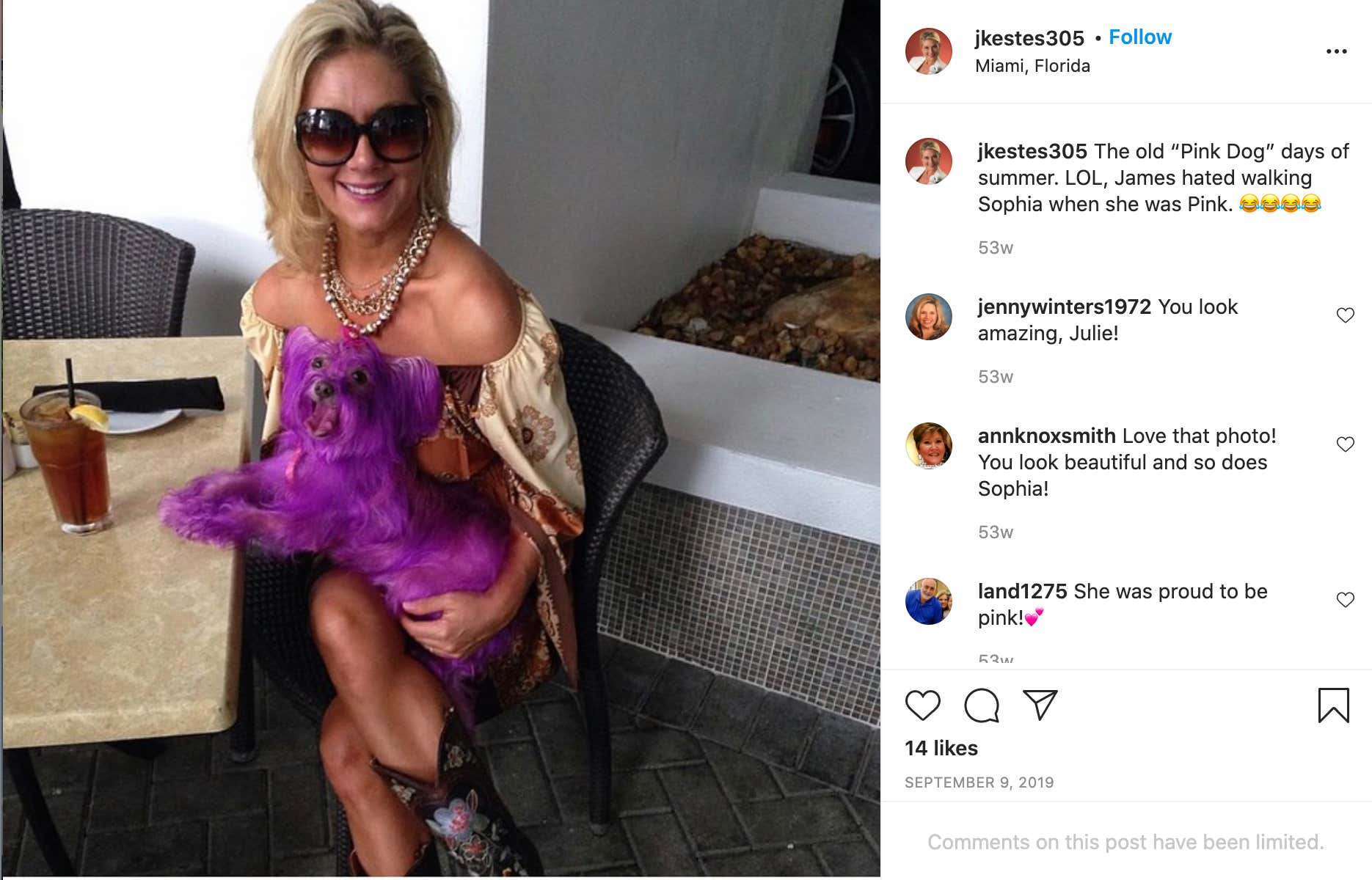 Yesterday YCK posted a photo on her IG of a billboard in my hometown of Austin, Texas. The billboard was paid for by a lobby organization that represents Texas police officers and was put up to protest the Austin City Council's recent vote to redistribute a portion of the city's police budget to fund social services and alternative public safety programs. 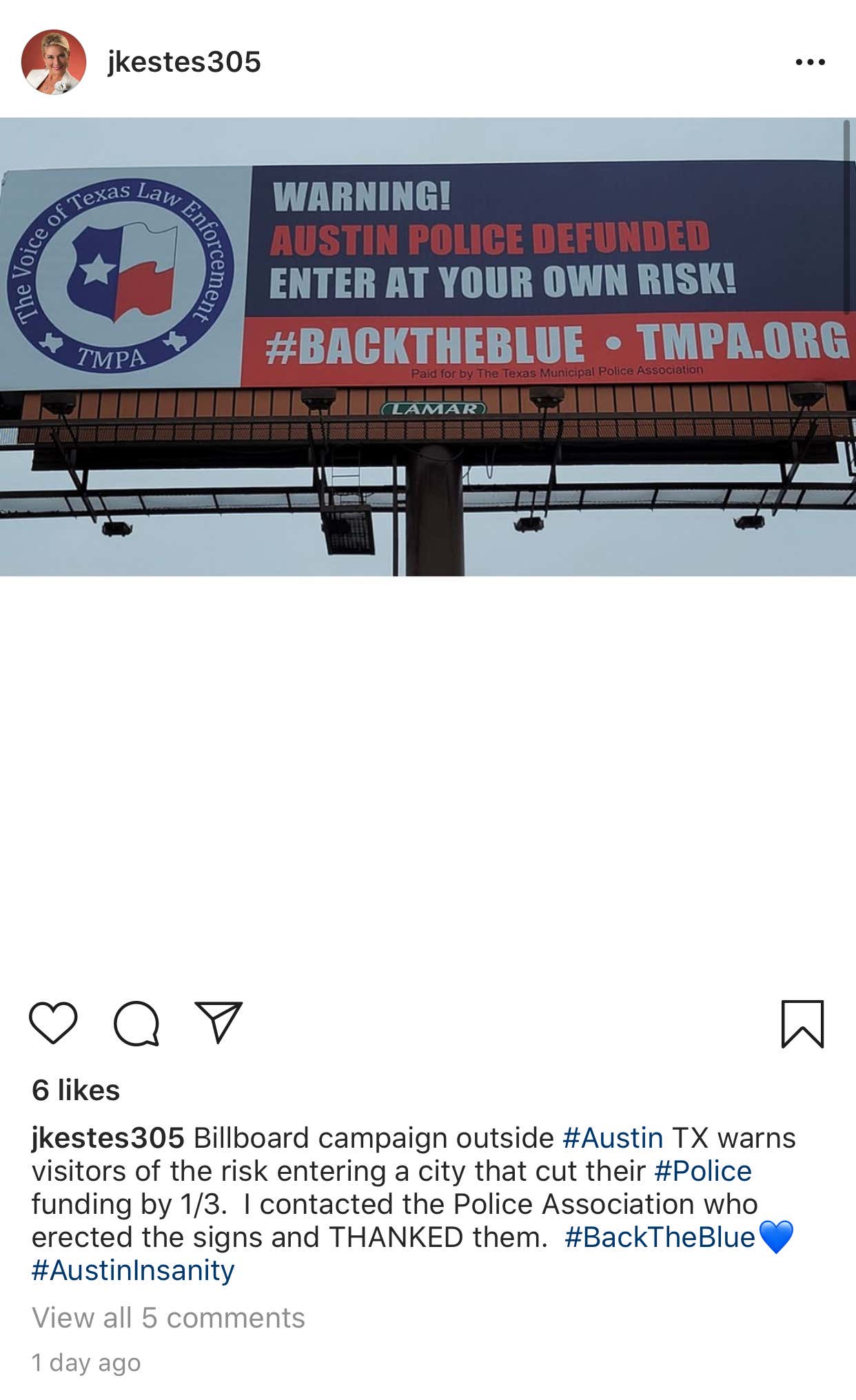 Whether you agree or disagree with the city council's decision is, again, not the important part of this story.

For the record, Yelp Crusader Karen disagreed. Which is totally fine and okay, that's what makes America great. YKC is free to post any photo related to any topic and express whatever opinion she happens to have on the subject. YKC has rights and free will, unlike her dog (above). She absolutely SHOULD express her first amendment and support for law enforcement -

But what Karen SHOULDN'T do, is fuck with the business of struggling independent restaurants because they happen to operate within a city that made a decision they have absolutely nothing to do with. That's what she shouldn't do, but a Karen is gonna do, what a Karen is gonna do. 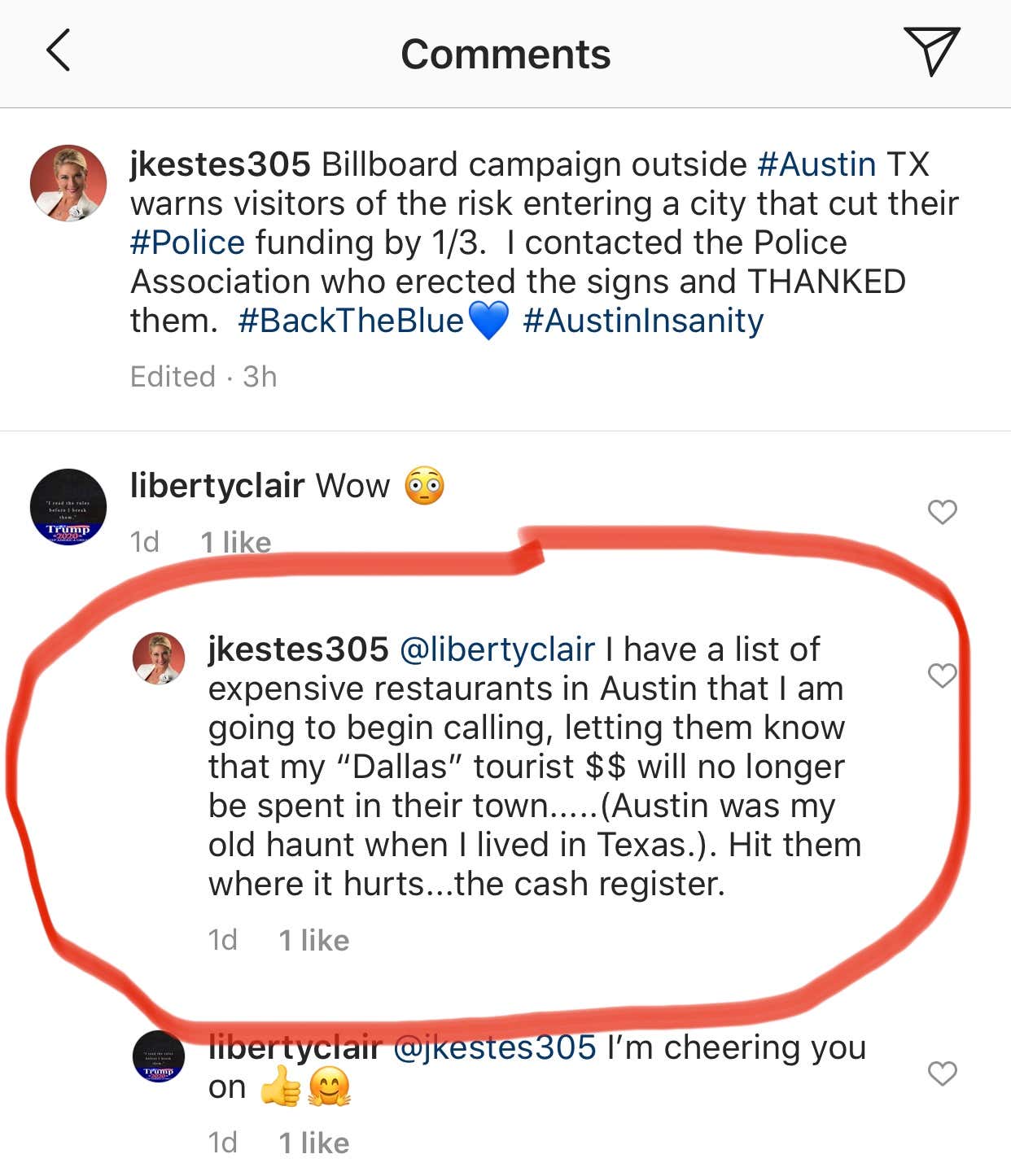 Looks like Yelp Crusader Karen was ready crush some struggling smalls businesses… when YCK realized that randomly calling restaurants in Austin and asking to speak to the manager to let them know she wouldn't be spending her sweet Dallas money at their establishments because of a billboard she saw that they had nothing to do with wasn't hitting them where it hurts hard enough, she was forced to evolve into Karen 2.0, leaving one star reviews on their Google Business pages (I know, we should be calling her Google Review Crusader Karen, but Yelp Crusader Karen just slaps different).

A diabolical scheme to further cripple a community of struggling small businesses in an effort to make a statement about her opinion? Got em.

Here's some of her finest work: 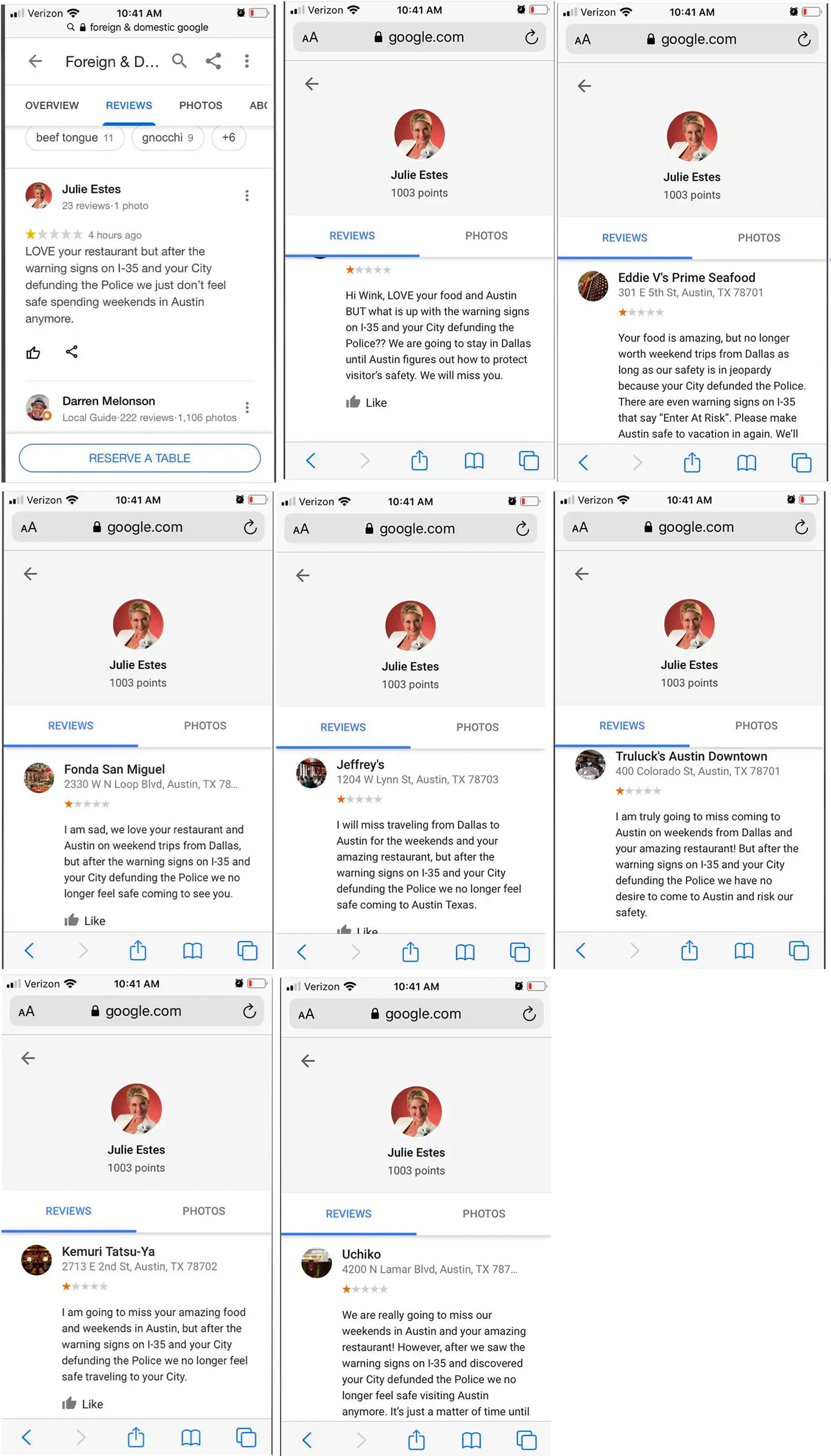 Some of you might be saying, "what's the big deal, she left a negative review?" and if you're saying that, it most likely means that you've never worked in a restaurant. A restaurant getting a bad over all rating on search engines or yelp can literally be the difference between surviving and having to close their doors. I used to wait tables at place in Austin called The Highball that had a policy where you got fired if you got two bad Yelp reviews (BTW this is the kind of policy that helped create the Karen). The amount of stars a restaurant has directly effect their ranking factor in Google’s search algorithm.

I can try to hammer home how bad what this lady is doing fucking sucks, or how shitty, misguided, and non-patriotic it is to attack a struggling service-based small business during a global pandemic is, but I think the co-owner of one of the restaurants Karen review-bombed explains it best:

Yep, that about sums it up. For the record, Sarah Heard is the co-owner of one of Austin's finest (and one of my favorite) restaurants in Austin, Foreign and Domestic - a restaurant that most certainly did not deserve a one star review from Karen for no reason. So in honor of this Yelp Warrior, and because her attack-list happens to perfectly double as a list of some of the most excellent restaurants Austin has offer, I am going to spend the rest of this blog giving more accurate reviews of these fine culinary institutions.

This place is the shit. A haunt and favorite of all of the Hard Factor boys, I first ate here while production managing a shoot for Absolut Vodka and Walk The Moon. It was back at the beginning of the trend when brands were obsessed with farm to table eats in hip cities like Austin in an attempt to capture a real-grassroots-organic-authentic-hyper local-experience. So they brought in band from out of town who didn't know or care much about food because their publicist thought it would be a good idea and they paired them with legit Austin chefs. One of the chef's was Ned Elliott, then chef and co-owner of Foreign & Domestic along with his ex-wife Jodi (tense kitchen). The shoot sucked, paid like shit, and ended with a free 21+ Absolut Vodka branded concert from a band whose fan base's average age is 16… but the food Ned & Jodi put out of their kitchen was magical. F&D changed ownership in 2017 to it's current owners but continues to put out consistently excellent and inventive food.

I've only eaten here once because it's pricey. In fact it was for a pitch dinner for a movie I was raising money for. I knew that whether the investors were interested in the movie or not, they were at least going to pay for dinner, so when they asked where I wanted to meet I suggested Truluck's. Top 5 best meals of my life. Next level service…. they had lemon net for the seeds, ice cold spoons, I was way out of my league. The investors ended up committing to committing $500,000 to the film over desert, which made the meal even better. With their first money in, we knew that we could easily get the rest of the funding and be a shoe in for Sundance the next year. We celebrated and parted ways with hugs exchanging words of adulation. The writer/director and I has been trying to raise money for this movie since he first finished film school 6 years earlier. We had finally done it, I was on top of the world….  The investors ended up stalling for months before eventually pulling out of the project through and email from their lawyer and a bullshit excuse; as a result we lost all of the other investors, the project fell apart throwing 3 years of hard work down the drain, and my reputation took a major ding. It was easily one of the worst experiences of my life… and I would do it all again for a free dinner at Truluck's.

If you can, the table on the second floor by the bay window overlooking downtown is magical.

WINK
1014 N Lamar Blvd, Austin, TX 78703
Style: Winebar
Highlights: Tucked away in the back corner of strip mall next to a laundry mat is one of Austin's best kept secrets. Their staff knows their shit when it comes to vino and someone pull off super laidback in a 'upscale' environment. There is almost always at least one old wino sitting at the bar the regale you with an interesting story about one of their divorces.

Eddie V's Prime Seafood
301 E 5th St, Austin, TX 78701
Style: Steaks & Seafood
Founded in Austin, TX around 20 years ago, Eddie V's has become an institution. The vibe is reminiscent of a Chicago steak house mixed with a cocktail bar. The service here is insanely good; they make you feel like for the right gratuity you could ask them to dispose of a body for you and there would be no questions asked.

Mark from Hard Factor recently got gout there, so you know it's good.

Kemuri Tatsu-Ya
2713 E 2nd St, Austin, TX 78702
Style: Texas Influenced Japanese Izakaya
This is one of Austin's most unique spots for sure. They marry Texas BBQ with traditional Japanese dishes, tons of sakes & Japanese whiskeys, always weird but delicious stuff on their menu. The interior walls look like what the Japanese version of the Texas Chainsaw Massacre house.

Fonda San Miguel
2330 W N Loop Blvd, Austin, TX
Style: Interior Mexican
An Austin staple since 1975. Next level interior Mexican food. The bar area makes you feel like you're in an eccentric Mexican drug lords living room (I mean that in the best way). Chef's kiss to the cucumber margarita.

Jeffrey's
1204 W Lynn St, Austin, TX 78703
Style: New American
This is the oldest fine dining restaurant in Austin. For along time this was the closest bar to my house, but It's fancy as fuck so I would only go during their happy hour. The one time I went for a full dinner I sat one table over from Laura Bush. Fun fact, in 2016 a waiter named Johnny Guffey retired after 36 years of service - he was there so long with the same section that they call one of their dining rooms Johnny's room and commissioned a portrait for the wall, you have to respect that kind of dedication.