A couple of weeks ago, an art museum in Paris sparked a backlash when this young French patron of the arts was asked to cover up her cleavage or leave the gallery: 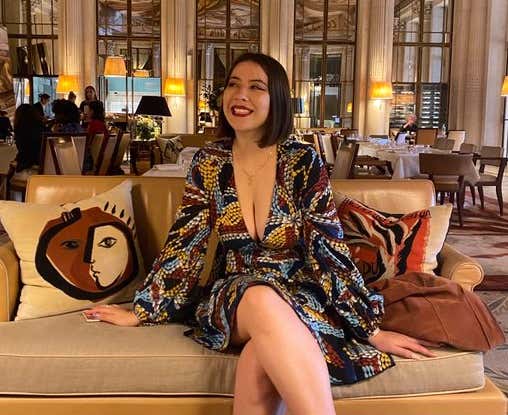 Well it seems that some women in France were more outraged than others. Enough to take matters into their own hands, if you will. To expose themselves and the hypocrisy. To take off the shirts of righteousness, unclasp the bras of liberty and point accusing nipples at the inequality of the policy

Here is the totally NSFW video. Click it at your own discretion. You've been warned.

Source - Topless feminists joined a protest at a museum after a woman was barred because she was showing "too much" cleavage.

Jeanne, a 22-year-old student, claimed male staff "stared" at her breasts and asked her to cover-up her low-cut dress before entering, sparking a feminist backlash against the Orsay museum in Paris, France.

In the clip, shared by FEMEN France on Twitter, semi-naked women with slogans on their breasts hold up placards and shout that their boobs "are not obscene".

Wearing face masks and standing a little apart, the women punch their fists into the air in unison as they chant.

Around 20 FEMEN activists took place in the topless demonstration.

As I believe they say in France (at least according to Google Translator), "Vas-y, meuf!" ("You go, girl!") I for one proudly stand with my sœurs in their struggle against the patriarchy and support them in this fight.

Hey Orsay museum. You run a business that is covered wall-to-wall, floor-to-ceiling, with celebrations of the naked human form. Fine artists spent years studying and honing their craft to produce sculptures, bas-reliefs, paintings and tapestries depicting nudity. The great masters honoring their Creator by glorifying his greatest work, the female body. People flock to your place to enjoy the majesty of works.

But now in 2020, you think that a dress that shows the part where two bewbs come together is obscene? What the hell is going on in France? I'd expect this kind of thing from the uptight, judgmental buttinskis who came to America 400 years ago with buckles on their hats, but not from the French. I mean, weren't your postcards the things that kept American, Canadian and British GI's going in WWII? Now 75 years later your hassling some art aficionado because her cleavage gives you impure thoughts?

It's an outrage and I'm proud of my French feminist sisters for standing up to the fascism like their forefathers did back in the 40s. Supporting Jeanne's right to wear dresses as low as she wants to go look at frescoes is a cause we can all get behind.