What a HUGE win by the best baseball team in the American League and what might soon be the best team in baseball, who sit 1.5 games behind the Dodgers for that mark *UPDATE* looks like LA is about to lose, so the Sox will only be 1 off the pace for best record in baseball. That's 21 wins in 26 games, ho fucking hum. Oh and tonight's win also secured the season win total over in some books and they still have 25%+ of the season to play. What a fucking wagon this team is.

MASSIVE go ahead hit with the slash. I wanted to lose my mind that he was going to bunt, in part because fuck bunting and in part because Engel's bunting mechanics are just bad and it'd be a free out. Nope, slash that fucking run in. Awesome shit. Start him every game from here on out, he'll give you more offense than Mazara and is a billion times better defensively than him. That makes Eloy's job all the easier too, with Robert being allowed to fade to LF more. 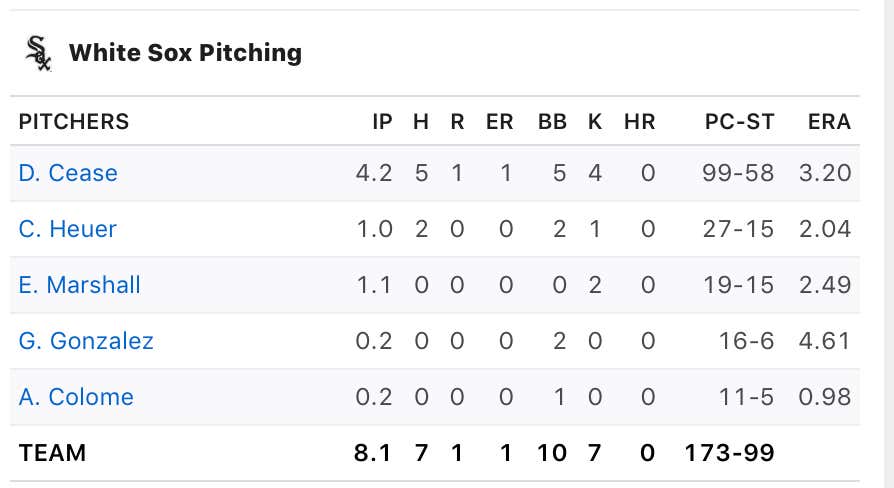 The pen was fantastic, aside from Gonzales stupid fucking walks. Heuer and Marshall are both legit high leverage guys you can count on. Both filthy. Colome steady, per usual. Dude just gets outs. Fuck peripherals.

He's slumping, but that was a HUGE walk on like a 10+ pitch at bat. Veteran approach

Get a timely hit you assholes!!!

Eloy, Abreu, Moncada, all did their things too. Dunning is on the bump tomorrow and at worst will fill up the zone and let the defense work. STEP ON THEIR FUCKING THROATS.

Don't stop now boys!!! Magic # to clinch a playoff spot…. 4. Or something, that's what I got by my count, don't quote me, just win the fucking division.