Source - Matt Bete was chilling out and catching some Zzz's Saturday in his Greenfield, MA home when a black bear got into his backyard. A Ring camera captured the scene as the bear milled around the pool, slowly creeping toward Matt dozing in his chair.

The bear took a quick sniff of Rip Van Winkle, before at his feet before the bear gently pawing at Matt's foot to wake him up. As he sat up, that seemed to scare the bear which took off running.

You know what? That wasn't that bad. I thought there was going to be a much bigger reaction, but it was pretty much just confusion. Which is what I expect from any dad being woken up mid-nap. Anyone over the age of forty wakes up from a snooze and they're essentially blacked out drunk. It's because they get up so early. From the looks of it, that video was taken mid morning and I'd be willing to bet that guy had already mowed the lawn, cleaned the gutters, watered the garden and been to the dump. Chances are he was just getting into his REM cycle when the whole thing took place.

I love how he just sat after he knew it was a bear too... 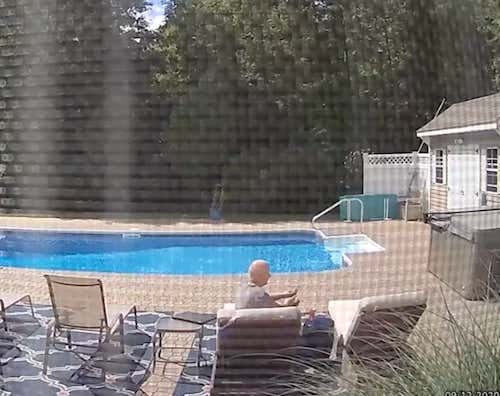 "Eh, fuck it, he's gone. Back to sleep." I aspire to have that level of relaxation some day. The second I close my eyes my mind starts racing which is usually followed by dream where my teeth fall out. Not sure what that's about. Thank god everyone's okay! RIP Timothy Treadwell.