There's nothing I find funnier during a fight than a perfectly executed flop. Let me introduce you to one of the better ones we've seen at the 8 second mark: 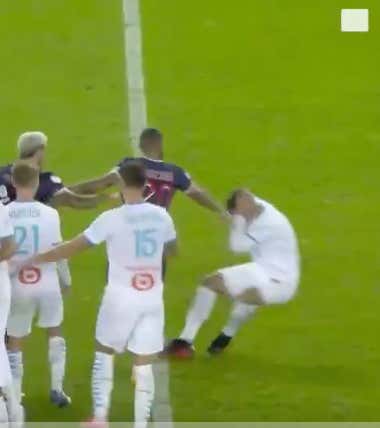 Three rolls for a slight push and grabbing the head? Listen you can get one roll here tops. Two is pushing the limits, three is just a clear flop. Everyone knows those rules. You simply can't start the fight that way, ESPECIALLY when the first move is a punch to the back of the head before that.

It's not exactly a secret I'm a soccer guy too. Played my entire life, yada yada yada, but there's nothing more on brand than soccer players starting fights with kicking. Sure, the flopping is there, but the fact the first move is to kick someone is just on brand. I respect that about the sport more than anything else.

The only way you can actually flop like this during a fight is if you know you're going to get your ass kicked. You mouth off to the wrong guy and you just know you have zippy chance. That's when you pull this move off. Doing it on a push during a soccer fight? Pussy move, no other way about it.

PS: How about the move from the ref to stand off to the side, wait for the skirmish to end and then hit everyone with a card? Hate refs, kinda respect the dick move though.