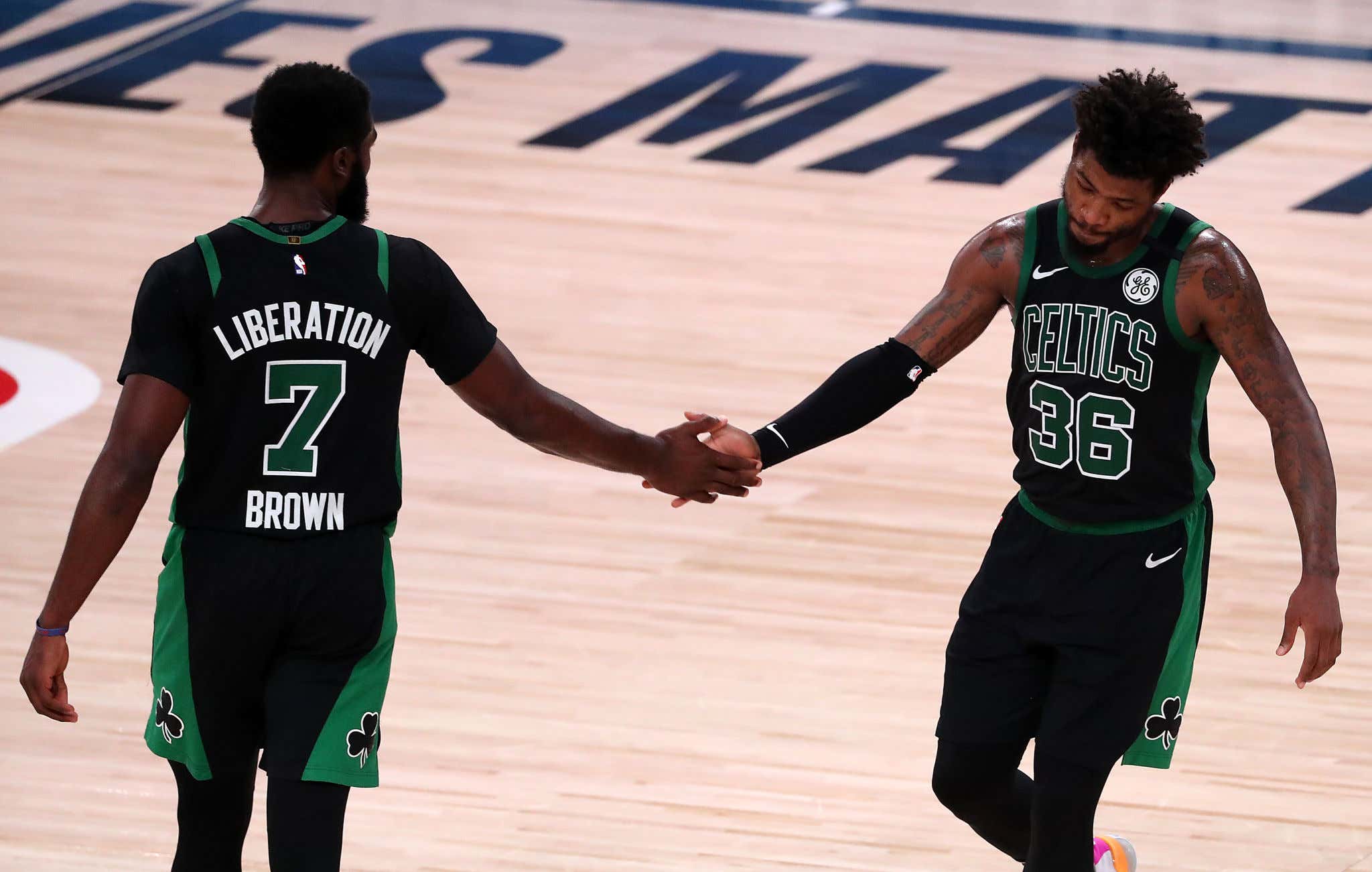 Before we get into things, we first have to talk about what an effort the Raptors put up in this series. They make you earn every little thing you get and then some. I never really understood why there were people out there that thought the Celts would simply roll through this team, and even if it took some prayers to get to a Game 7, that's sort of my point. They find ways to win and really competed in this series. Even Game 7 itself was a back and forth effort that this Celtics team had to earn. I think that's one of the things I'm most happy about when I look back on everything. It took a few tries, but this team responded well in the face of adversity, punched back, and closed when it was time to put the Raptors away and win the series.

There truly is nothing like experiencing a Game 7 when your favorite team is involved. Every possession feels so huge, like that is going to be the play that swings it one way or the other. It's excruciating. But when you win it? Oh man is there no better feeling in the world outside of winning a championship. To finally put this Raptors team away and not have to deal with Lowry's huge shots and flops, Fred VanVleet heating up from three, everything Ibaka does continuing to ruin my life, I have to admit it is a relief. The Miami Heat are going to be their own animal that present their own set of problems, but we can worry about that a little later.

First, we celebrate the Game 7 win and the return to the ECF for the third time in four years. The haters and losers of which there are many are sick to their stomachs. I know they had the jokes/tweets/comments ready in the event the Celtics choked away this series. We would have had to take them as Celts fans because it would have been embarrassing. But now, we are the ones to can dance on graves and yeah it feels pretty fucking good. The journey isn't done just yet, but let's take a minute to enjoy where we are along the ride.

- I know there are maybe some other directions you would go to kick us off, but after spending many hours thinking about this there is really only one place that felt right. Our heart and soul

Marcus Smart refused to let the Celtics lose this game. When you are in a Game 7 where you need some absolute warriors on your side, there are few better options than Marcus Smart. Jayson Tatum even told you this

But it's also not hyperbole. It wasn't just his 16 points and 6 assists. It was the 3 steals, one of which was the biggest steal of the game before Kemba's AND1 jumper. He had the block of the game chasing down Norman Powell on the break right after Powell beat the Celtics with the exact play. Smart was able to adjust on the fly and like he said, he's 1st Team All Defense for a reason

and how could we forget the matchup with Kyle Lowry. Anyone who watched this series knows that was the difference maker. In Game 7 Smart matched up with Kyle Lowry a total of 25 possessions and held him to zero (0) points on just 0-1 shooting with 1 TO. Clamps like you read about. He completely removed Lowry from the equation.

We all know that the Marcus Smart Experience is one hell of a rollercoaster. But last night was an example of why you simply have to blindly love and trust him. Accept the poor shooting at times to get everything else we witnessed last night. The Celtics lose this game and this series without Marcus Smart and his winning plays. That's not just a cliche Celtics fans use to mask up that he stinks. No no, he's a winner and he proved it yet again.

- Heading into Game 7 we all knew that this was going to have to be the moment that Jayson Tatum put the team on his back and asserted himself as an efficient #1 option. Well, almost immediately that's exactly what he did

29/12/7 and 4-8 from three. The scoring we're used to, but how about his dedication to the glass and his playmaking. Right after setting a career high in assists he comes back and drops 7 more. The development of his passing is what has really taken his game to a new level in the bubble. If he's able to read defenses like this and be a plus when it comes to facilitating, he makes even more progress to becoming one of the most unguardable wings in the entire league.

Not to mention, his rebound on Grant's missed FTs legit saved the season. That's all heart right there folks. That's wanting the ball more than your opponent and making the effort plays you need to make to win a Game 7. On the defensive end, how about this for a night. He guarded OG a total of 18 possessions and Siakam a total of 11 possessions and held BOTH of them scoreless.

- Huge shoutout to Grant for how he ended this game defensively. First it was his huge steal late on Siakam, and then his picture perfect defense on FVV in the final seconds. I thought Grant had great position defensively and made a lot of the extra hustle plays that can help change a game which is exactly what his role should be. Remember, this dude is a rookie making these type of impact plays in the highest of high stakes. But tell me more about how Danny Ainge can't draft. The two Williams had a massive impact on this result. Hell yes.

- How about the bounce back shooting performance from Jaylen. He finished 10-17, he also had 4 huge steals, and this is the type of locked in Jaylen that we love to see

Defensively, it was the same old story. He held Siakam to just 2 points on 14 possessions and OG to 0 points on 10 possessions. Thankfully he didn't fuck his shit up when he slipped on that wet spot, and I think moving forward as long as Jaylen continues to be aggressive and attack the rim, we'll get more of these type of performances in our future.

- You've heard a lot about some of the great individual defensive performances, and let's be clear about something. The Celtics defense is why they won this game. It's why I stress it before every game they play. When they defend like this, they can beat any team in the league. Period.

I cannot stress how much of a factor this was in Game 7. The Celts forced 18 turnovers which led to 31 points. They won the fastbreak battle 23-10. That's beating the Raptors at their own game. When they needed to tighten up in the fourth quarter to win this game, they held the Raptors to just 35/25% shooting with 6 TOs. They had more TOs than FGM in that quarter! That's the good stuff.

- When this team needed Kemba, despite another horrific game for 99% of it. He was there. By my count this is now the 3rd GIGANTIC midrange jumper Kemba has made to help seal a playoff win. Love him forever

- Really pleased with the mental toughness this team showed throughout this game. They blew a 9 point lead twice, saw TOR go on a 20-4 run or some shit, and they didn't fold. They didn't quit or get tight. Instead they hunkered down defensively and clawed their way back. That's going to be important moving forward.

- I'm just really happy we don't have to live in a world where this team lost 4 of 5 to choke the series. That maybe would have been it for me.

- I may be nitpicking, but I still think Tatum needs to be so much tighter with his handle, especially going up against Jimmy Butler next round. It still feels like he's too loose with it and his TO numbers have been pretty terrible lately. He's too important of a player to be turning it over like he has been these last few games. The Heat defense is no joke, they have active hands and are going to put pressure on you. Hopefully he finds a way to get that under control.

- Call me crazy, but I didn't love the all three point shooting offense to start this game. It ultimately worked out, but I hate the approach. Threes are fine, I get they are part of the game, but they can't be a focal point of your offense. I think like 12 of their first 19 shots were threes. They started 3-12. I would have liked to see them attack more. This team falls in love with the three too quickly and it usually serves them better to have a more balanced approach.

- They only shot 38/33% in the third and only lost by 3! That's still bad, but not as bad as we thought! Wild they continue to struggle so bad in that quarter, maybe that's just a Raptors thing, but man do they made those 12 minutes brutal to watch.

- To be honest the fourth quarter wasn't much better offensively with only 20 points on 35/14%. They literally refused to score points for the final 3 minutes of this game. They couldn't even close without giving us a heart attack. That's so them. Very, very on brand given what we've watched all year. Doesn't mean I have to like it.

- You may think it's a bit, but my obsession with FTs is real, and Game 7 is why. Are you kidding me? You're really going to go 13-23 in the biggest game of the year, including 7-13 in the fourth quarter? Tatum missing three more, Kemba missing 2, I mean what are we doing here. This game isn't close if the best shooters on this team make their FTs. You were begging the Basketball Gods to make you pay for leaving that many points on the board. This is a great FT shooting team, so where was it. Please cut that shit out, my heart cannot take it.

- I'm sorry, but this was another brutal night offensively for Kemba. Outside of that one jumper, he was a no show. It didn't cost the team like it did in Game 6, but I think we all agree Kemba has to be a billion times better against the Heat. Hopefully they can take these next few days and figure out how to get him going despite a box and 1, because the Heat are going to try some shit.

6-15 (1-7) is not going to get it done. We would kill any other guard who had that type of performance in a Game 7, so I want to be consistent. If Kemba isn't better this team won't make the Finals. Hopefully now this is out of his system because they need him badly.

But whatever. They pulled it out. Their journey to Banner 18 is moving forward and has never been more wide open. The Heat are the new trendy pick, they've been playing great all bubble playoffs. It'll be another battle, I have no doubt.

To that I say bring it on.