Source - The Chinese ambassador to Britain put his foot in it after he liked an X-rated clip on his official Twitter account.

Firebrand Liu Xiaoming is known for spouting his nation’s rhetoric on Hong Kong, Coronavirus and the treatment of Uighur Muslims in China, but late last night he used the social network for more personal perusal. 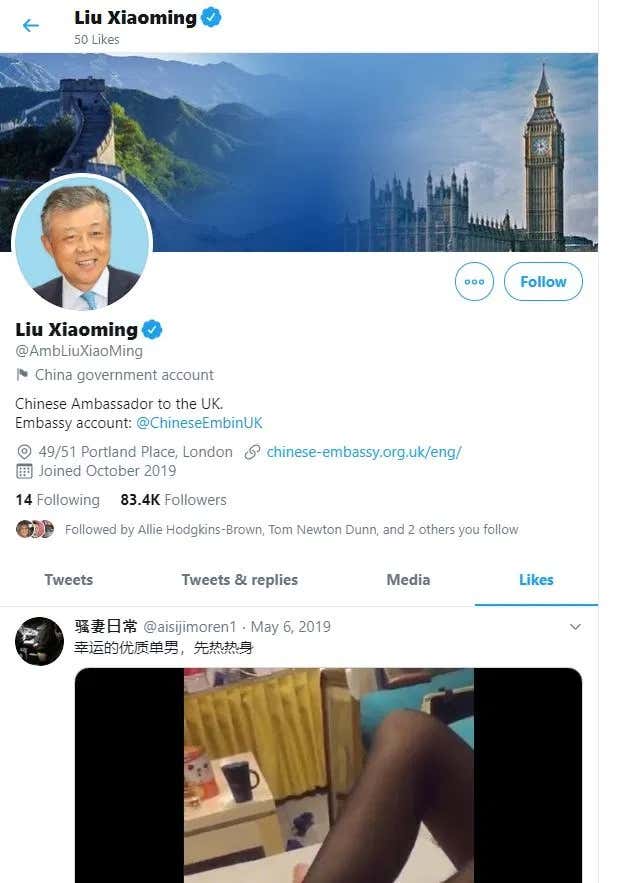 The top Communist diplomat “liked” a ten-second clip of a woman wearing stockings performing a sex act too rude to describe in a family newspaper.

The clip in Chinese is roughly translated as: “Lucky quality single guy, warm up first.”

The Chinese language account is for fans of “Beautiful legs in stockings.”

It was on show for all his 83,500 followers all morning before being removed

In a statement, the Chinese Embassy said his account had been hacked using "despicable methods."

Hey, Chinese Embassy. It's OK. You can relax. Leave the hacked accounts excuse to our pill addled celebrities and political perverts. You and Liu Xiaoming have done nothing to make up phony excuses for. Not in our eyes anyway.

I'll be honest. It took all my resolve not to put a pun in the headline of this, like "Steps in It" or "Stubs His Toe" or something. But you deserve better. Instead, I'll leave it to the expert.

So just remember, China: In this country, we don't foot-shame our fetishists or make up phony excuses for them. We joke about them, sure. But we hire them to run our football teams and put them on television. Get with the times.