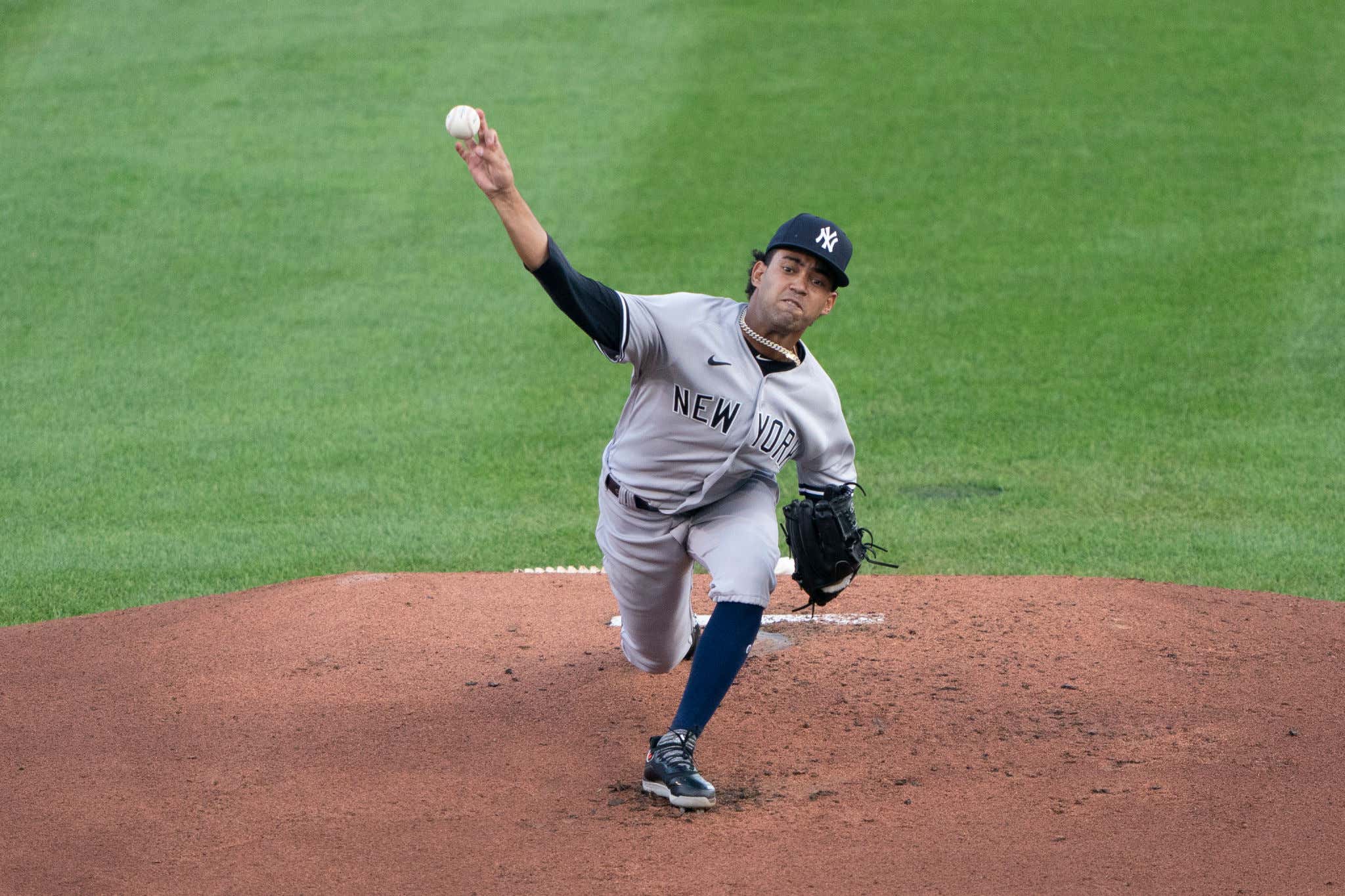 All I have to say after that is THANK GOD for Deivi Garcia. The 21 year old took the ball tonight in Buffalo with all the pressure in the world on his shoulders. The Yankees disaster of a collapse had seen them drop to .500 baseball, having lost 15 of their last 20 baseball games. They were on the verge of being swept by the Blue Jays in embarrassing fashion. Deivi Garcia and Gleyber Torres had enough and put an end to that right then and there.

The 21 year old stud right hander has been nothing short of a revelation. After his seven brilliant innings tonight, Garcia lowered his ERA to 3.06 over his first three MLB starts. That is the lowest on the Yankees staff. His only real mistake came on one fastball over the heart of the plate on a 3-2 count that got sent outta the park. Besides that he was untouchable.

Deivi has always been a name in the Yankees system that has opened eyes, but in his progression through the minors there has always been one thing that's plagued him: control. That problem appears to have been corrected and it's unlocked Garcia as a monster of an MLB pitcher. He worked quick tonight, getting ahead in counts, and attacking hitters when he had to. Aside from his + curveball, his deceptive fastball and solid changeup help create a really good three pitch mix for hitters to get fooled on. There's the slider too which had some bite tonight, but those three pitches I mentioned are his go-to. Dude has poise on the mound as well. He might be the shortest pitcher in Major League Baseball, but that man has balls made of steel. I trust Deivi Garcia with the ball every time he goes out there. Is it out of desperation? Possibly, but I do not care. Look at this guy.

I cannot wait for his next start. The future is so bright for this man. Thank God they didn't give him up for Marcus Stroman last year, holy moly.

Now the way things have gone lately with the Yankees is that when they'd get a great start from a starter like Deivi, they'd waste it like they did with JA Happ last night. Tonight the offense was on their A game. Gleyber Torres had himself a night, starting with this bomb to left to get things going.

After the Jays tied it at two a piece, the Yankees answered back with a big three run fifth. This was the counter punch they haven't had lately. Usually they'd get the early lead, give it up, and have the bats fall silent. On Wednesday night they hit the Jays back with an upper cut. After a rare Tyler Wade base hit to lead off the 5th frame, DJ moved him over to second on a grounder. That allowed Luke to shoot one through the right side for the go ahead run. Gleyber Torres followed that a few batters later with a massive two out, two run double down the line to extend the lead to three.

Don't you dare let Gleyber get going like he did in 2019. That man may have been asleep in the beginning of 2020, but that swing is rounding back into form after some time on the injured list. That's a bad man when he's got it right. Oh and rocking some glasses too? An unstoppable force.

After Deivi got through seven beautiful innings Britton and Chapman got the job done finally. Yanks even gave Aroldis a five run cushion so it was next to impossible for him to fuck up.

Just a huge, huge, huge win for the New York Yankees. As I type this the Mets have taken the lead on Baltimore late so that would mean some breathing room as the Yanks enter a gigantic four game set with the O's starting tomorrow. Obviously it's the Mets we're talking about so that lead could go bye bye before I hit publish. I can't believe I'm even typing those words, but hey this is the reality we're in. Just get in the fucking postseason and get hot. That's all that matters right now. Can't change the way this has gone already, just focus on these remaining games and get back to playing Yankees baseball. Tonight they did that.

Deivi Garcia is the goddamn truth.