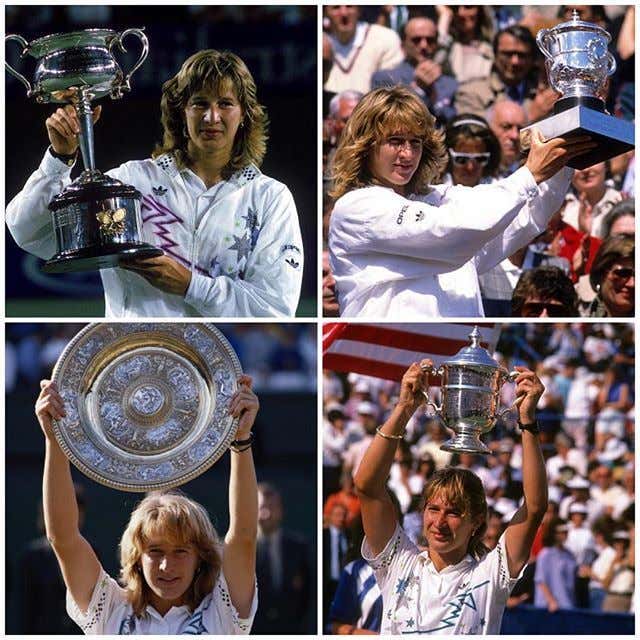 Steffi Graf completes the Grand Slam by beating Gabriela Sabatini in straight 6-3, 3-6, 6-1 in the U.S. Open. The 19-year-old from West German previously won the Australian Open against Chris Evert, beat Natasha Zereva in the French Open, and won an epic match against Martina Navratilova at Wimbledon. Graf is the third woman to win a Grand Slam, and the second in the Open Era. There has not been a Grand Slam since.

Steffi Graf was born on June 14, 1969, in Mannheim, Germany. At the time located in the free western portion of Germany. Graf’s father introduced her to tennis when she was three-years-old. By the time she was 12, Steffi Graf was winning Junior Championships in Europe. Graf made her professional debut, losing to Tracy Austin, a two-time U.S. Open Champion in 1982.

Steffi Graf’s parents closely guarded her schedule to prevent her from burning out. In 1985 she began to show her future prowess, reaching the semifinals of the U.S. Open. She won her first tournament the following spring. She again reached the semifinals of the U.S. Open, showing the world who would become the new power on the women’s tour. Steffi Graf’s time arrived in 1987 when she won the French Open and followed it up with appearances in the Finals at Wimbledon and the U.S. Open. It was the start of 13 straight finals appearances in Grand Slam tournaments.

Steffi Graf started 1988 with a bang as she won the Australian Open without losing a set. In the finals, she defeated American Chris Evert 6-1, 7-6, taking the tiebreak in the second set 7-3. Graf was just as dominant in the French Open, not losing a set and hardly losing a game. In finals, she shutout Natasha Zereva of the Soviet Union, 6-0, 6-0. Graf was cruising again at Wimbledon until she met Martina Navratilova of the United States. Graf lost her first Grand Slam set of the year in the Wimbledon Final, falling 5-7 in the first set. However, she showed the ability to come back, taking the second set 6-2 and won the final set 6-1 to proclaim herself the best player in the world.

Seeking to become the first winner of a Grand Slam since Margaret Court in 1970, Steffi Graf was the focus of the 1988 U.S. Open. Again, Graf was dominating the tournament as she did not lose a set on the way to the Finals. She won the semifinals without a sweat as Chris Evert withdrew due to injury. Facing Gabriela Sabatini of Argentina, Graf split the first two sets 6-3, 3-6. In the third set, she took over again, winning 6-1 to complete the Grand Slam. 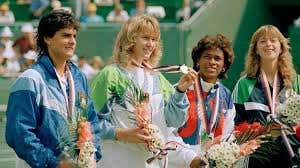 Steffi Graf topped all the Grand Slam winners a month after the U.S. Open as she claimed a Gold Medal at the 1988 Summer Olympics in Seoul. Again Graf rarely lost a set, with here only blemish coming in the quarterfinals when she needed three sets to beat Larisa Savchenko in three sets. Once again, it was Gabriela Sabatini in the finals. This time Steffi Graf won 6-3,6-3. She would go on to win 22 Grand Slam singles, which was best in the Open Era before Serena Williams won 23.