Let's start with the funniest part of the video: Bodega Association President being a real job. Even living in New York for the past 5 years, I had no idea that bodegas across this great city are represented by a president? Is that the goal of a bodega owner, to one day become the president of the bodega association?

Now onto the contents of the video, this man was straight up posterized on the streets of NYC: 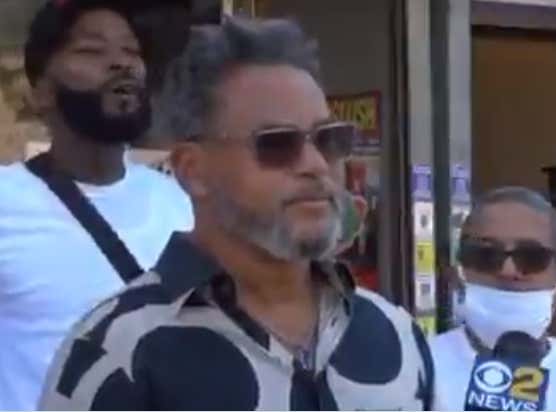 Look at his face! You can see it, even with the sunglasses on, this man is dead inside. He got posterized like Kendrick Perkins did by Blake Griffin.

Now, what's the beef? It appears the guy in the back is not a fan of the Bodega Association President for having some press conference in front of a bodega, about what? I'm not sure and I don't think the guy in the back cares at all for the Bodega Association's propaganda. He goes onto ask the president "where was you at when the riots were going on?" That was the kill shot for me. It's unclear if the guy in the back owns a bodega, works for it, or is just a really big fan of it, but he calls out the Bodega Association President (still such a funny job to me) for having white shoes on. Another phenomenal chirp. You ever seen a bodega owner with white shoes on? No, because they are out there day in and day out in the trenches, protecting their business, while this fraud was chilling in his house.