One of the easiest answers to the "what should the next 30 For 30 be about?" question is Manti Te'o's catfish. Even as a high schooler when it all went down, it was truly one of the wildest stories of my sports lifetime. I'd watch a 3-hour documentary on it right now and I don't even think the story needs 3 hours.

Kyle Rudolph was on Notre Dame's 2012 team, which had to be one of the weirdest lockerroom dynamics of all time. He sat down with Bussin With The Boys to discuss that wholeeeee "situation."

“That storyline started maybe even the Michigan game…Manti’s grandma and ‘girlfriend’ passed away that week and so obviously it was just gaining steam, gaining steam and a lot of the guys on the team that I was talking too were like ‘this guy, he doesn’t even talk to her like this whole girlfriend thing, people keep making it a huge deal.’ Once the media gets hold of a storyline it’s kind of hard to backtrack and be like I don’t really have a girlfriend so we’ll just ride it out. Never thinking that this girlfriend would turn out to be a guy that he talked to on the phone 3 times.”

The man was on the cover of Sports Illustrated for it: 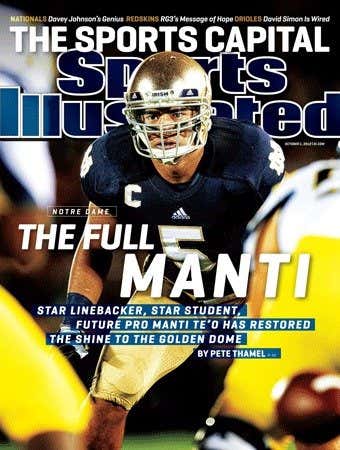 With the premise of the article being his two personal losses:

SOURCE-After spurning the NFL for one more year in South Bend and suffering a pair of heartbreaking personal losses, all-everything linebacker Manti Te'o has emerged as the physical and emotional center of an Irish uprising.

Now, of course, Manti's loss of his grandmother was awful, but the girlfriend, at least according to Rudolph, never seemed to be a big part of his life, even when he thought she was real.

“They [his former ND teammates] told me that he [Manti Teo] was at the college football awards and just racking up the awards, had an unbelievable season and his phone rang from the number that he associated with his girlfriend that apparently passed away and it was like ‘ohhh shit.’ That’s when it all started to fall apart.”

Truly an absurd storyline from the guy who catfished Te'o. He went to the extent of killing her off! What a psycho! And then for his teammates? How do you even handle that?

Is it okay to say I feel bad for Te'o? The guy was a great college LB and he somehow found himself involved in the most popular catfishing ever. We should just think of him for his accomplishments at Notre Dame, but nope, when you hear Te'o you think of the infamous catfish. Couldn't have happened to a nicer guy either. Well, at least that's what I think. He appears to be nice? At least he has a hot wife now: