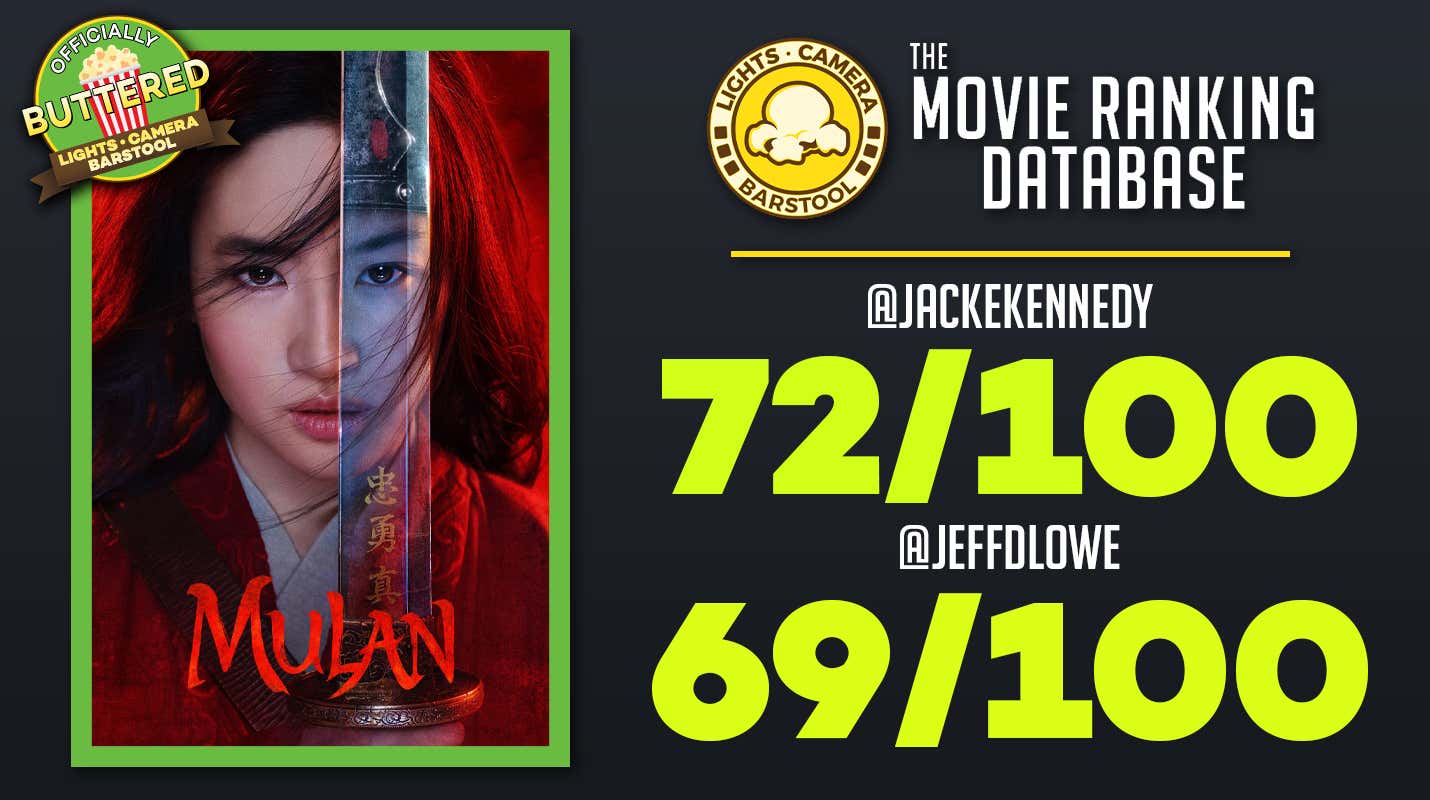 This movie does a lot of things that are refreshing and new for the world of Disney live-action remakes, but unfortunately muddies up that good with bad editing, poor development and worse storytelling. And as a big fan or the animated movie, my frustration with those fuck ups just gets compounded. If you have the cash to spend and want to watch something new with your family, then by all means it’s worth the watch. Otherwise, you’re probably better off saving your money.

One huge positive I will give the movie is that I really liked the performances of Yifei Liu as Hua Mulan and Tzi Ma as Hua Zhou. Liu has this extremely badass demeanor that was perfect for the role. “Perseverance” is a key word for the tale, and her rendition is the textbook definition of the term. Tzi Ma did what he does best and knocked a dad role out of the park.

King. Outside of them, I’ll credit Jun Yu (Cricket) and Gong Li (Xian Lang) for offering much needed humor and a more sinister presence to the movie, respectfully. Donnie Yen, however, was a non-factor for this movie which was a bummer. What was worse was that Jet Li was outright horrible. To the point where I’m still shocked at the takes they chose to include for his scenes.

The main issue that burns this movie is the fact that it struggles to find its identity. It borrows a lot of its marketing from the animated version, but that isn't what it's adapting. Rather, it’s a telling of the famous Chinese legend. It feels like Disney tried to cash in on multiple markets by making it a more true-to-legend war epic while also adding some levity for the families watching because of name association. By keeping an eye on both, they failed in both. It’s not a successful war epic, and the levity is so forced and awkward that it isn’t a successful family movie.

Another issue I had with the movie offers no characterization at all. They introduce a lot of people but none of them, including Mulan, are given a chance to build any empathy with the audience. They also just do a very poor job at progressing the plot in a coherent way. If I hadn’t seen the animated movie, I wouldn’t have a fucking clue what’s going on. Lastly, I really disliked the element of chi. I’ve always found Mulan to be by far the best Disney “princess” and one of the best Disney characters because she works really fucking hard and proves that she (and any other woman) can do anything a man can do. Making her strength derive from magic fucking obliterates that underlying point. Considering how hard Disney marketed the movie as one of female empowerment, that was very lame to me* (this is an important distinction)

It’s not all negatives, though. The action sequences looked great, from big sweeping battles to individual rotating tracking shots in 1v1 fights. I also enjoyed the Hong Kong film techniques used like the Wire Fu they sprinkled throughout the movie. There is also placed some well placed homages to the animated movie with musical notes and some character bits which was nice. The best thing this movie did was not cater so desperately to Western audiences. This was appropriately cast with no random fuckin’ Billy Magnussuns rolling in like in the Aladdin remake, thank god. That sort of representation in a major Hollywood movie is not only great for the international moviegoing audience, but for the Asian-American audience as well. In the end, I think 'Mulan' is a movie about a Chinese legend that was appropriately made for the market in China which enjoys large-scale films with action mysticism. In that sense, the inclusion of chi and other elements was in good taste. But the way Disney marketed and dug their fingers into certain aspects of the movie was not.

The one thing ‘Mulan’ really succeeded in doing was making me want to see an adaptation of the movie that isn’t made by Disney. This could make an incredible war epic with more soul and less of the big mouse’s influence. Like I said in the beginning of the review, if you’re starved for content, then it’s not a horrible buy. That said, if I didn’t have to watch it as a function of my job, I would have regretted not just waiting for it to come to streaming.

P.S. I already know a bunch of people are going to complain about Yifei Liu and her “comments” about the Hong Kong situation. If you are holding her accountable by not watching this, good. Just keep that same vitriol for her co-star Donnie Yen, as well as Jackie Chan and many more. That's part of the incredibly shitty reality for entertainers in China.