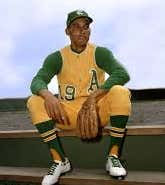 Looking to draw more fans, the struggling Kansas City Athletics hold “Campy Campaneris Night” at Kansas City Municipal Stadium. Bert Camapaneris a popular young player becomes the first player in major league history to play all nine positions during a game. Campaneris allows one run in the eighth inning. With the bat, Bert Campaneris goes hitless in three at-bats but scores a run after a leadoff walk. The California Angels would win the game 5-3 in 13 innings.

Bert Campaneris was born on March 9, 1942, in Pueblo Nuevo, Cuba. In 1961, he was signed by the Kansas City Athletics. Three years later, Campaneris made his debut with the A’s one to remember on July 23, 1964, as he became the second player to hit two home runs in his first game. The first player to do it was Bob Nieman with the St. Louis Browns in 1951. Three other players have debuted with the two home runs since Mark Quinn of the Kansas City Royals in 1999, J.P. Arencibia of the Toronto Blue Jays in 2010, and Trevor Story of the Colorado Rockies in 2016.

After a decade in Kansas City, the Athletics were struggling. They had yet to post a winning record since moving from Philadelphia in 1955. They were in last place at 51-87, under manager Haywood Sullivan and were dead last attendance. Seeking to draw more fans, Owner Charlie O. Finley came up with the idea to hold Campy Camapaneris night to attract more fans and showcase the team’s best player by having him play all nine positions in a game against the California Angels.

Managed by Bill Rigney, the Angels entered the game with a record of 64-77. The publicity stunt worked as the A’s drew 21,576 fans, one of the largest crowds of the season. With the plan for Bert Campaneris to play all nine positions, Dick Joyce made the start for Kansas City, while Dean Chance was on the mound for the Angels. Bert Camapaneris started the game at his familiar shortstop position. He did get a chance to make a play, as the first three batters flew out. Leading off, Campaneris walked and scored on a double by Ed Charles to give the Athletics an early 1-0 lead.

In the second inning, Bert Campaneris played second base and took part in an inning-ending run down. In the third inning, Campaneris moved to third base and again did not get a ball hit his way. In the fourth inning, Bert Campaneris moved to left field and caught a ball hit by his cousin Jose Cardenal as the Angels tied the game on a two-out double by Joe Adcock that scored Jim Fregosi. Campy caught another ball in centerfield during the fifth inning. With two outs in the sixth inning, the Campaneris sideshow cost Kansas City a run, as he dropped a fly ball off the bat of Jim Fregosi with two outs that allowed the Angels to take a 2-1 lead.

Bert Campaneris played at first base in the seventh inning, catching a pop up by Paul Schaal. The real test would come in the final two innings. In the eighth inning, Bert Campaneris made his only pitching appearance in a 20-year career. It started well as he got Cardenal on an infield fly. However, he walked the next two batters before Joe Adcock had an RBI single to make it 3-1. Campy buckled down and got Bobby Knoop to hit into a double play to end the inning.

With Aurelio Monteagudo pitching for Kansas City, Bert Campaneris went behind home plate. Ed Kilpatrick led off with a single and stole second base. With two outs, Kilpatrick tried to steal home but was tagged out by Campaneris. In the ninth inning, the A’s scored a pair of runs to tie the game on RBI singles by Ken Harrelson and Dick Green. Bert Campaneris got the rest of the night off as Rene Lachman came into catch in the tenth inning.

In the 13th inning, the Angels scored two runs without the benefit of a hit to win the game 5-3. John O’Donoghue, who misplayed a bunt, suffered the loss, while Bob Lee earned the win for California. Jim Coates finished the game for his first save of the year.

Bert Campeneris enjoyed a 20-year career and was a part of the Oakland Athletics dynasty in the 1970s. Cesar Tovar duplicated the nine position adventure with the Minnesota Twins in 1968. In 2000, Scott Sheldon did it for the Texas Rangers, and Shane Halter did it with the Detroit Tigers. The most recent nine position game was by Andrew Romine of the Tigers in 2017.