NYT -  Lou Brock, the St. Louis Cardinals’ Hall of Fame outfielder who in a career spanning two decades became the greatest base-stealer the major leagues had ever known when he eclipsed the single-season and career records for steals, died on Sunday. He was 81.

Brock began receiving treatment for multiple myeloma, a type of blood cancer, in 2017. His left leg was amputated in 2015 as a result of a diabetes-related infection.

On June 15, 1964, a floundering Cardinals team traded one of the National League’s leading pitchers for an outfielder who had failed to live up to his promise. That deal, sending the right-hander Ernie Broglio to the Chicago Cubs for Brock as the centerpiece of a six-player swap, became one of the most one-sided trades in baseball history, but hardly in the way that many envisioned.

Broglio won only seven games for the Cubs over the next two and a half seasons, then retired. Brock, sought by Cardinals Manager Johnny Keane for his largely untapped speed, helped take St. Louis to the 1964 World Series championship and went on to turn around games year after year with his feet and his bat.

When he learned that Jackie Robinson had broken Major League Baseball’s color barrier, he said: “I felt pride in being alive. The baseball field was my fantasy of what life offered.”

Brock’s 118 stolen bases in 1974 eclipsed Maury Wills’s single-season record of 104, set in 1962, and his 938 career steals broke Ty Cobb’s mark of 892. He led the National League in steals eight times. Although Rickey Henderson would break Brock’s stolen-base records, Brock’s luster remained undimmed. A left-handed batter, he had 3,023 hits and hit .300 eight times. He helped propel the Cardinals to three pennants and two World Series championships. He was elected to the Baseball Hall of Fame in 1985.

Flat out gaudy stats from the consummate table-setter, Lou Brock. He lived a hell of a life in spite of growing up the son of plantation workers and attending a one-room schoolhouse in rural Arkansas. Baseball was his way out.

He was listening one night to a feed from the St. Louis radio station KMOX. Harry Caray was broadcasting a game between the Cardinals and Jackie Robinson’s Brooklyn Dodgers, the summer after Robinson broke the major leagues’ color barrier, a time when, as Brock put it, “Jim Crow was king.”

“I was searching the dial of an old Philco radio,” Brock recalled. and when he heard about Robinson, “I felt pride in being alive. The baseball field was my fantasy of what life offered.”

As a boy, Brock never played organized baseball. Instead of a ball and bat, he swatted rocks with tree branches. But he received an academic scholarship to Southern University in Baton Rouge, La., and played baseball there, catching the attention of Buck O’Neil, the longtime Negro leagues player and manager, who was scouting for the Cubs.

The Cubs signed Brock thanks to Buck O'Neil in 1960 and he made his pro debut late in 1961. He was a late bloomed and wasn't able to hit his first two seasons. When he did reach base, the Cubs didn't really let him run. Even though he was highly regarded as the fastest guy in the league. Hitting only .251 over those first few seasons the Cubs dealt him to St. Louis at the trade deadline in 1964 in exchange for pitcher Ernie Broglio. The trade would go down as one of the worst in history (even more so when you take into account the racist motivations behind it) but at the time it seemed like the Cubs robbed St. Louis.

“I thought it was a dumb trade,” the Cardinals’ future Hall of Fame pitcher Bob Gibson was quoted by The St. Louis Post-Dispatch as saying. “I didn’t know how good Lou would be. No one knew. I didn’t even remember facing him. I heard it and thought, ‘For who? How could you trade Broglio for that?’”

So not only were Brock's new teammates wary of him, but he was thrown right into the fire by taking over left field for the just retired Stan Musial.

In those remaining 103 games of the season, Brock hit a ridiculous .348 and stole 33 bases. The Cardinals came out of nowhere to beat out the Phillies for the pennant then beat the Yankees in a seven-game World Series.

I never got to see Lou Brock play of course, but my memory of him was hearing his name cursed by my father at a young age. I grew up hearing tales of how he basically, single-handedly dismantled the Red Sox in the 1967 "Impossible Dream" World Series.

Retro Simba - Brock set the tone for the 1967 World Series by hitting four singles, stealing two bases and scoring both St. Louis runs in the Cardinals’ 2-1 Game 1 victory at Boston. The four hits tied a World Series single-game record. Brock had a chance to break the mark against John Wyatt in the ninth but drew a walk.

Said Cardinals shortstop Dal Maxvill to The Sporting News: “When Lou starts it, this club rolls. If there’s anybody I’d hate to start the season without, it’d be him.”

In the seven-game Series, won by the Cardinals, Brock batted .414 (12-for-29) with two walks and a Series-record seven steals.

“You know before you steal a base that you’ve got nine guys out there in different uniforms,” he once said. “You’re alone in a sea of enemies. The only way you can hold your own is by arrogance, the ability to stand before the crowd. Every time you get thrown out, you’ve got to believe that somebody owes you four or five steals.” - Lou Brock

(what a bad ass quote) 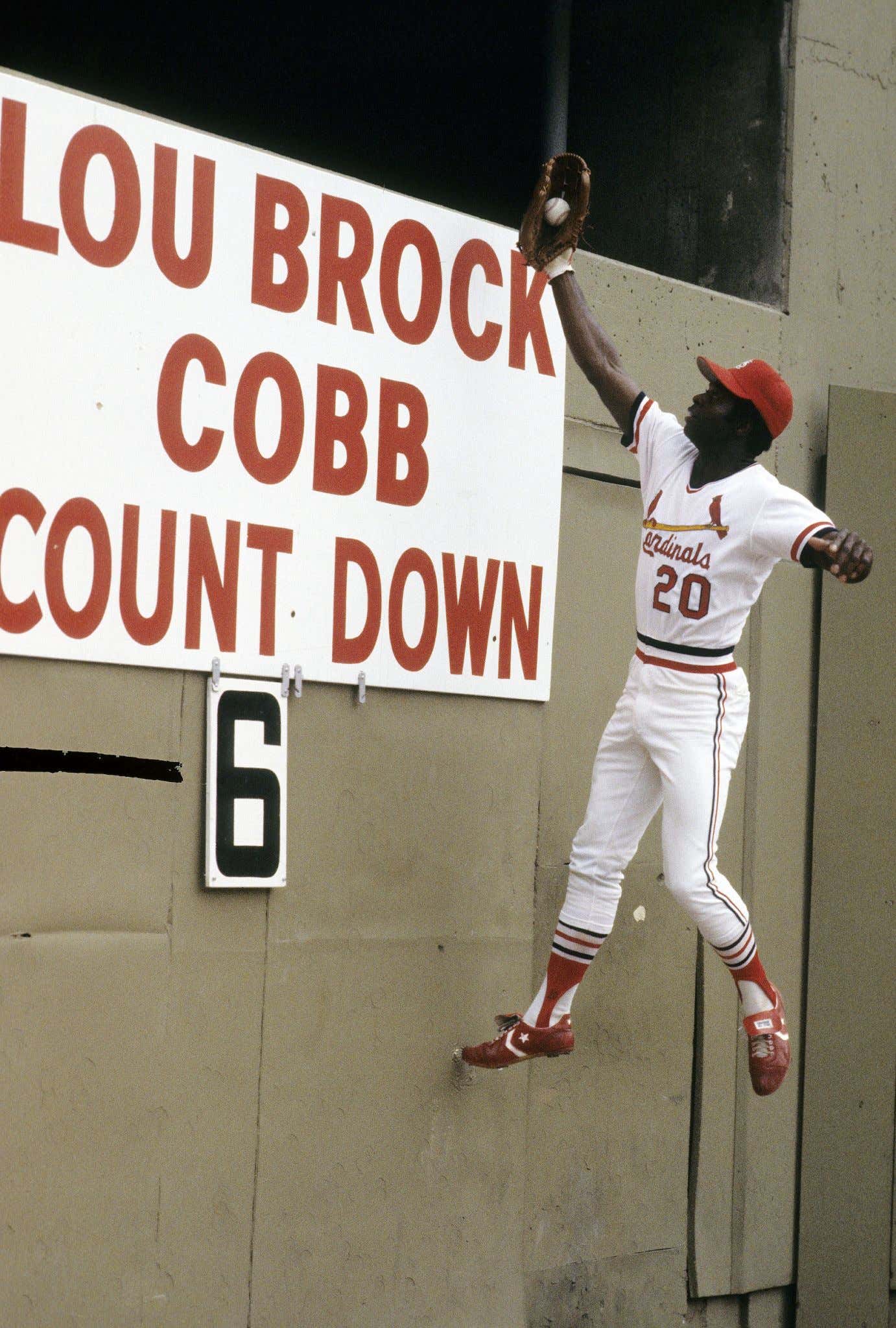 He retired with 938 and would hold the all-time record until being passed by Ricky Henderson in 1991.

There was a stretch of 12 seasons where he averaged 65 steals and 99 runs scored a year.

Brock wasn't just a freakishly fast athlete. He was a true student of the game.

For all his natural speed, Brock was also a student of baseball and an innovator in pursuing the art of stealing bases, using technology to “synchronize your movement with the pitcher’s movement.” Late in the ’64 season, he obtained a movie camera and began filming pitchers as they took their set position, threw to first base and threw to the plate, hoping to discover tendencies that might give him an edge.