I stumbled upon this thread this morning and felt obliged to chime in. Now mind you, this is a conversation between a person I'm friendly with on White Sox Twitter and a person that identifies with a group that absolutely loathes me and absolutely loathes Barstool for all of the old and tired reasons you always hear, so I'm taking this as an opportunity to call that group a bunch of fucking idiots that don't know what the fuck they're talking about.

The tweet above is so, so, so ill-informed for myriad reasons. Aside from the fact that it's patently false and incorrect, it speaks as if all of the players that Reinsdorf, Williams and Hahn have extended over the last 5+ years did so with a gun held to their head. It speaks as if Chris Sale, Jose Quintana, Nate Jones, Adam Eaton, Tim Anderson, Eloy Jimenez, Aaron Bummer, Yoan Moncada and Luis Robert do NOT have the cognitive ability to act on their own volition when signing a contract, nor do their agents. It's quite insulting, if you think about it.

They claim these players signing these pre-arb deals are doing so under the guise of a "false choice". Laughably incorrect. They're doing so because THEY'RE PLAYER FRIENDLY DEALS!!! Not team friendly deals, player friendly deals. Let me explain in layman's terms:

A player is typically under team control for 6 years. That can change with service time considerations, but that doesn't really matter for the purpose of this blog. I'm going to use Eloy Jimenez's contract as a baseline example for this blog. Here is the deal he signed prior to the 2019 season, courtesy of Spotrac, but you could use literally any of the pre-arb extension White Sox players have signed over the years and it's the exact same story.

Here is the structure of his current deal: 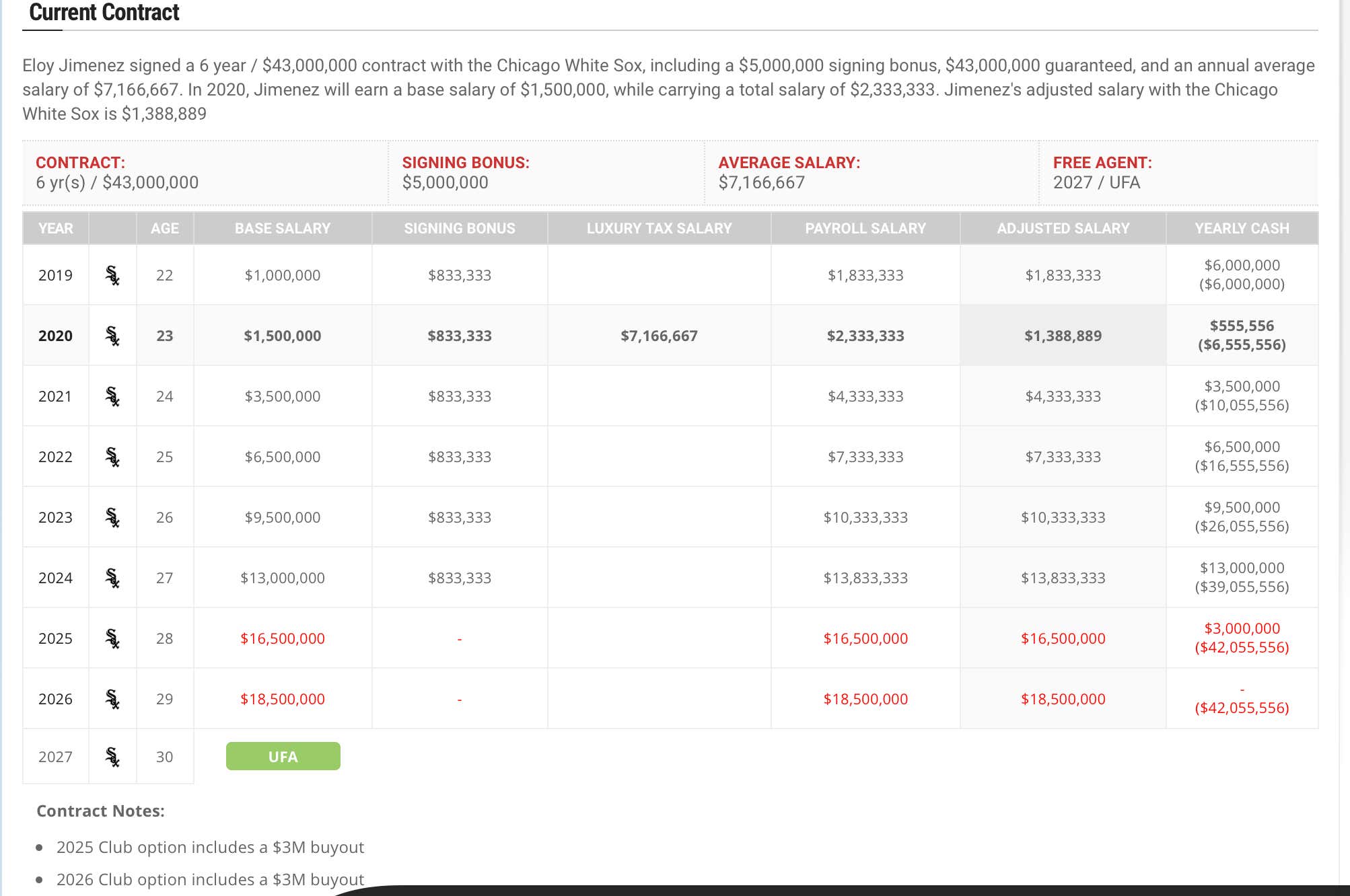 In 2019, Eloy would have made a league minimum $563,500 in 2019, and in the proceeding 2 years prior to arbitration, would have received a raise from the team. Could be $10K, could by $500K, depends on what you do in that first year. There's nothing a player can do to change this number, the team basically gives you the raise they want to give you. No fighting it at all.

But it doesn't stop there - in arb years 1, 2 and 3 Eloy is still sort of fleecing the Sox.  At least he is as of now he is. After signing his deal, he'll now be due $6.5MM, $9.5MM and $13MM in years 4, 5 and 6 of his deal. That's $29MM of guaranteed money - and unless he's putting up MVP type numbers, he wouldn't be making that under the normal arbitration process. He'd be making more like $4MM in arb 1, $7.5MM in arb 2 and $12MM in arb 3. That's about $23MM - still less than what he's making under his current deal. So… it's still player friendly, and by millions of dollars. He'll make $43MM in the first 6 years of his deals, when in all likelihood he'd have made somewhere around $25ish million had he not signed the extension, and again, that $23MM is only if he were a really, really good player over those hypothetical arb years.

Now, there is absolutely the possibility that Eloy puts up MVP type numbers and WAY outperforms his contract value through arb years 1-3. If he drops 45 bombs, hits .300, and gets on base at a .400 clip in 2021, there's a chance he wins MVP which obviously would have inflated his hypothetical arb value. If he is absolutely MURDERING the baseball in years 4-6 of his deal, he hypothetically could have been making more through the standard arbitration process than he would be signing this current deal. That's the risk he's taking, but the White Sox are also risking a lot of money that they don't need to with hopes that he will, in fact, murder baseballs and outperform the contractual value they're paying him.

We saw this happen with Chris Sale. He WAY outperformed his contract, and in the end it was absolutely a team friendly deal, but Sale also guaranteed himself financial security. The White Sox took a gamble and won. That's what they're doing with all of these guaranteed contracts - taking big time gambles on players they think will be stars down the road.

So far it's worked out for them to a T. The only deal that doesn't look good in hindsight was the Nate Jones deal, and that's whatever anyways. But let's talk about those two option years - for Eloy, they're $16.5MM and $18.5MM. That's $35MM more in team options - he'll be 28 and 29 when those options (could) kick in and at that point, is likely a DH. $17.5MM AAV for a 28 year old DH is about right on the money for fair market value right now.

So get out of my face talking about how Rick Hahn is holding guns to his players heads and forcing them to sign "team friendly" extensions. He's not. If anything, he's putting himself behind the 8 ball and gambling on players to perform as best as they possibly can, in a sport that is unbelievably humbling and puts even the best "talents" and "tools" in their place. That's not to say that I don't love these deals, either, because I do. I don't care about financial figures, I care about good players being contractually controlled by the White Sox as long as possible. And they are, just in player friendly manners. Fine by me, spend that money!

Hahn and the White Sox have been lauded for these deals, and though they're not exactly "team friendly" they should be getting all the love for them. It gets players in the lineup or on the mound opening day, shows that the team is confident in a player's abilities, and in general, are contracts that act in good faith. I love these deals and hope Vaughn gets on prior to the start of 2021 as well. Don't be surprised if/when it happens.