Today is one of the greatest days in all of sports. Normally, it's the first Saturday in May. Summer is right around the corner and optimism abounds. The eyes of the sports world shifts to Louisville, Kentucky for the first jewel of the Triple Crown, the "Run for the Roses", the Kentucky Derby. A hundred thousand people fill Churchill Downs to watch twenty horses compete for the chance to move on and possibly join one of the most elite groups in all of sports at Belmont Park five weeks later. It's a beautiful thing and it has been going for nearly a century and a half without interruption.

Until this year, that is.

Everything has gone to hell in a hand basket in 2020 in every way imaginable. And yet, here we are. With eyes pointed towards Churchill Downs for the Kentucky Derby. It's not in May, it's not the first jewel of the Triple Crown, and there will be nobody in attendance. But it's still the damn Kentucky Derby, and it will be one of the most memorable editions of the race ever run. Hopefully, not just because of the conditions, but rather because we may be seeing a generational type horse run today, in Tiz The Law.

A word of caution about betting today. The back half of Churchill's fourteen race card looks like it could be very chalky, and you simply cannot underestimate how much money Tiz The Law is going to take today. The Pick Four, Five and Six is going to be very difficult to make significant money on. That doesn't mean we won't play it, but there's a reason not to go deep in them.

As for the race itself, Tiz The Law is an exceptionally deserving favorite. He's the biggest ML favorite since Easy Goer. That's a long time. The horse has answered the bell every single time and he has done so resoundingly. His victories are all by more than three lengths and he has been eased up in the stretch in his last two. All reports are he's training spectacularly. His post draw out of seventeen should be beneficial, as he likes an outside, clear trip. There simply aren't any excuses here. Obviously anything can happen, but this feels more like a coronation than anything. Which, you know what, I'm fine with. In this insane, shitty year, I'll enjoy watching an unbelievably talented, generational horse.

Having said all that, there are still ways to bet this race, even with his likely 2-5, and make money. I'm likely going to play a heavy Trifecta, which I'm still tweaking, but I will give out on our special Derby edition of Hitting The Board. Here's my early, skinny Pick Five. Remember, I wouldn't go deep anywhere but the thirteenth race unless you really think you can beat those top choices. We will have lots more action later today. Let's have a great Derby Day and cash some tickets! 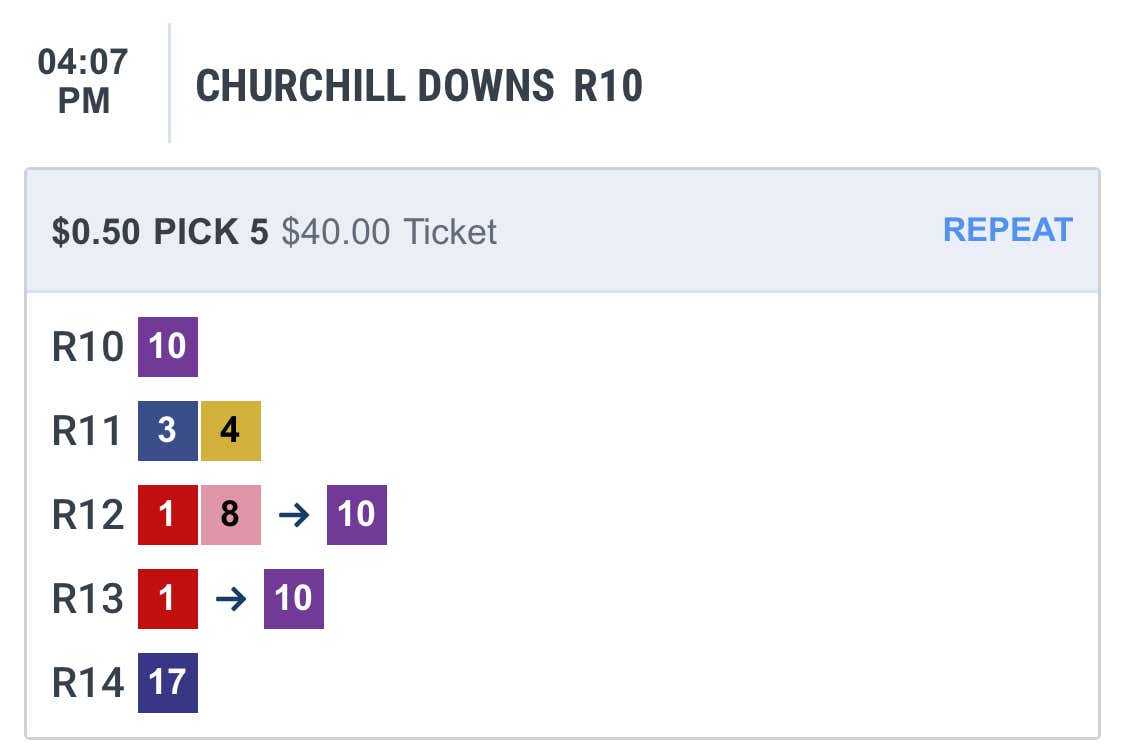