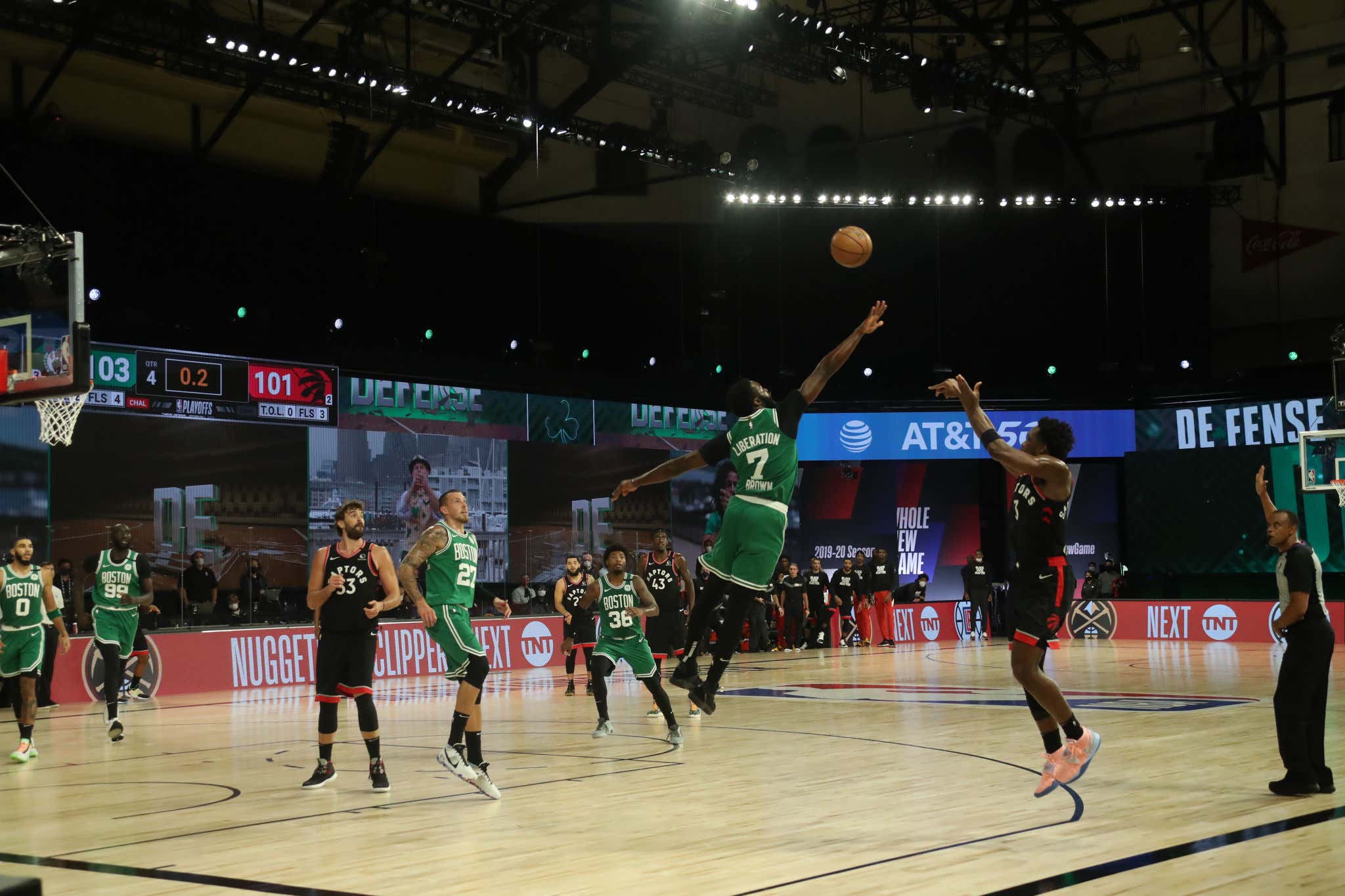 I've had a lot of time to think about what the fuck happened last night. With no chance I was going to fall asleep given that every single time I closed my eyes I kept seeing that final play, oh god dammit I just thought about it again. Hold on.

OK we're back, just had to give myself a quick lobotomy. What was I saying? Oh right that final play. You see, experiencing soul crushing pain is not a new feeling for any of us who dedicate our lives to watching this team play. We know this feeling all too well, especially in the playoffs. So I spent the majority of my night last night wondering how the hell this happened and reliving a bunch of previous Celtics heartbreaking playoff moments and it was a familiar feeling. A fun time as you can imagine. How does Jaylen lose a guy in the corner? How does Ron Artest hit that three in the Finals? How does LeBron have that type of performance in Game 6? How does Kyrie quit like that? The list goes on and on.

And look, I think we were all getting a little greedy thinking this series was going to be a sweep. Maybe this was the kick to the dick we needed to reset. We knew heading in this was going to be a battle, and if it takes a prayer inbounds play that had to be perfectly executed for the Raptors to pull it out, maybe that's not the worst thing in the world. Do I believe a word I just said? Not really, but it's been a while since I've had to spinzone so I'm a little rusty.

Now the one thing you should know by now is this blog does not stop just because the Celts lose. We do not only blog wins and pretend the heartbreaks never happen. We talk through them, we relive the pain, and we move on. So let's get this fucking over with.

- Part of me wants to skip this section entirely, but I understand the responsibility I have in that some of you might also need a pick me up. Outside of 0.5 seconds this team actually had some pretty positive moments. For example, how good has Kemba Walker been this postseason? I could kiss this man. He's lived up to the hype and expectations and then some. His Game 3 performance might have been his best one yet

The levels of trust I have for Kemba do come through in big moments is reaching Paul Pierce levels. OK maybe that's a little aggressive but I'm just trying to mask my pain right now OK? The point is, Kemba was fucking nails with his 29 on 9-15 (4-7). In the fourth quarter him and Jaylen were huge. That pass to Theis in what should have been the game winner was an incredible find. Defensively Kemba has been everywhere this series. I think we all thought his size would be an issue, but defensively he's been anything but a negative. He's taking charges, he's active defensively, there's just not a whole lot to be negative about when it comes to Kemba. Even in the games he couldn't buy a bucket he still came up huge in big moments.

That's why I'm confident moving forward. It looks like Kemba has his groove back and that knee looks perfect. No Raptors guard seems to be able to hang with him, and if they are going to continue to trap him I trust his ability to find the open man.

- I also thought Jaylen was really really good in this game outside of that final possession. Some might say that's all that matters but come on, don't be an asshole. Jaylen was huge in the fourth with 6 points on 3-4 shooting, and his defense on Pascal Siakam was the very definition of clamps

but you know what I really liked about Jaylen's night? He owned up to his mistake. He was accountable. He didn't blame anyone else or cause drama

That's a leader. That's a man that is going to come out FIRING in Game 4. I am already looking forward to his redemption.

How did this man only play 13 minutes? More on that in a minute.

- If we are going to praise him every time he plays well, we have to tell the truth and call out the times he stinks and Jayson Tatum stunk in Game 3. He shot just 5-18 (1-4) and also missed two FTs. It looked like he was hunting more for fouls than actually taking good shots, and obviously as the number one option on this team we need Tatum to score more than 15 points on dogshit efficiency if we want to win this series.

Just not good. Not only did he struggle offensively, but we did not get the locked in defender we've seen all playoffs. This was one of those games we saw early in his career where his shot wasn't falling and it impacted his play on both ends. This team needs Tatum to be better.

- There is no reason Enes Kanter should see the floor in this series. None. I don't care if TOR goes into a zone, Rob can pass out of it and find shooters. Is it a coincidence that Williams played 18ish minutes in the first two games and this team looked great, and then Kanter came in for like 4 minutes and the Raptors suddenly found life? Listen, it's not personal, it's a matchup thing. The Raptors guards are going to expose Kanter every single time and that's exactly what happened in the third quarter. He was a -4 in his 4 minutes and that was when you could sense the game was shifting. I don't know what the fuck Brad was thinking, but we'll get to him later.

- I don't know what the deal is, but this team has to find a way to not come out of halftime and forget how to play basketball. This is now the second game in a row they've been absolutely terrible in third quarters and gave the Raptors life. Remember, if not for Smart's 5 threes this team is down 1-2 right now because they keep starting the second half poorly. This time it was 38/37% shooting with 4 TOs. Marcus led the team in FGA with 4. Defensively they were nonexistent. Just a gross 12 minutes of basketball and just like that a 10 point lead was gone.

- It's not exactly rocket science. If this team does not defend, they don't win. They are too streaky offensively to fall asleep on the defensive end because when they do you get results like we saw last night. How's this for 4th quarter defense?

- OG's only fucking shot in the fourth quarter was that game winner. I'm going to be fucking sick.

- If I had to pick one consistent issue that the Celts have had in this series it's their inability to limit their live ball turnovers. It was only a matter of time before that cost them a game and look, here we are. The Celts had 15 TOs overall which lead to 17 TOR points and when it came time to fast break points it was 14-2. This is exactly what you cannot do against the Raptors. You need to make them beat you in the halfcourt. Giving up all those easy points is only going to hurt you in the long run. If they don't clean this shit up in Game 4 you're looking at 2-2.

- Can someone please tell Brad Wanamaker that you cannot do whatever he thinks he can do once he catches the ball and travels? Fine, I'll do it.

Brad, grab a seat. In the game of basketball once you catch the ball you need to put it on the floor before you move your pivot foot. If you don't, that's a travel. A travel is a turnover and the ball goes to the other team. That's bad and something that you should try and avoid.

- Up until Game 3, I thought Brad Stevens had been pretty flawless. I hate to do this to the man, but this loss is on him. The Kanter decision, how they handled that final play, just the worst time for him to shit his pants and make all the wrong decisions. You can't be fucking around in a playoff game like this. Every single game is a must win and very very important. This isn't a random game in December that you can try some wacky stuff. I think he deserved all the credit for how he performed in Game 1, but last night was a disaster and he cannot do that shit again.

Here's everything I hate about this play

2. Why are you going with a zone? All that does is leave open the opportunity for a miscommunication. You know where that doesn't happen? If you play man. Hard to have a miscommunication if the ask if for you to stay with your own guy no matter what.

3. I'm not sure what Daniel Theis is doing

4. Jaylen had to overhelp, and that split second screen by Gasol was all the Raptors needed. Had Jaylen not had to rotate up as much, he probably gets to that lob pass. Again, the downfall of a zone in this situation.

5. How do you lose the one guy in the corner who has done nothing but make corner threes in this series. Who cares if Marc Gasol gets the ball and scores, you go to OT. At no point did Jaylen ever think of checking OG as he made his way along the baseline and that's an issue.

- The one time Daniel Theis actually dunks it quick and doesn't get blocked, he dunked it too quick. Imagine that shit.

So here we are. Still up 2-1 with a chance to go up 3-1 Saturday night. I look at it like this, if you told me this was the Celts situation before the series started, I would take it. We all would. I think the pain of what could of been is why some might be depressed. But now we get to see what type of mental toughness this team has. If they come out and take Game 4, then I'll feel a whole lot better. We knew the Raptors weren't going to just roll over, and in the playoffs if you want to get to where we want this team to go, you have to beat good teams. The playoffs were never going to be a cakewalk. Would I love to be up 3-0? Yup. Very much so. But one loss on a prayer three does not shake my confidence in this team. I've seen their body of work all year and this entire bubble restart.

Time to turn the page, forget this ever happened and take care of business in Game 4. Take the time to get all this depression out of your system and be ready to roll Saturday night.