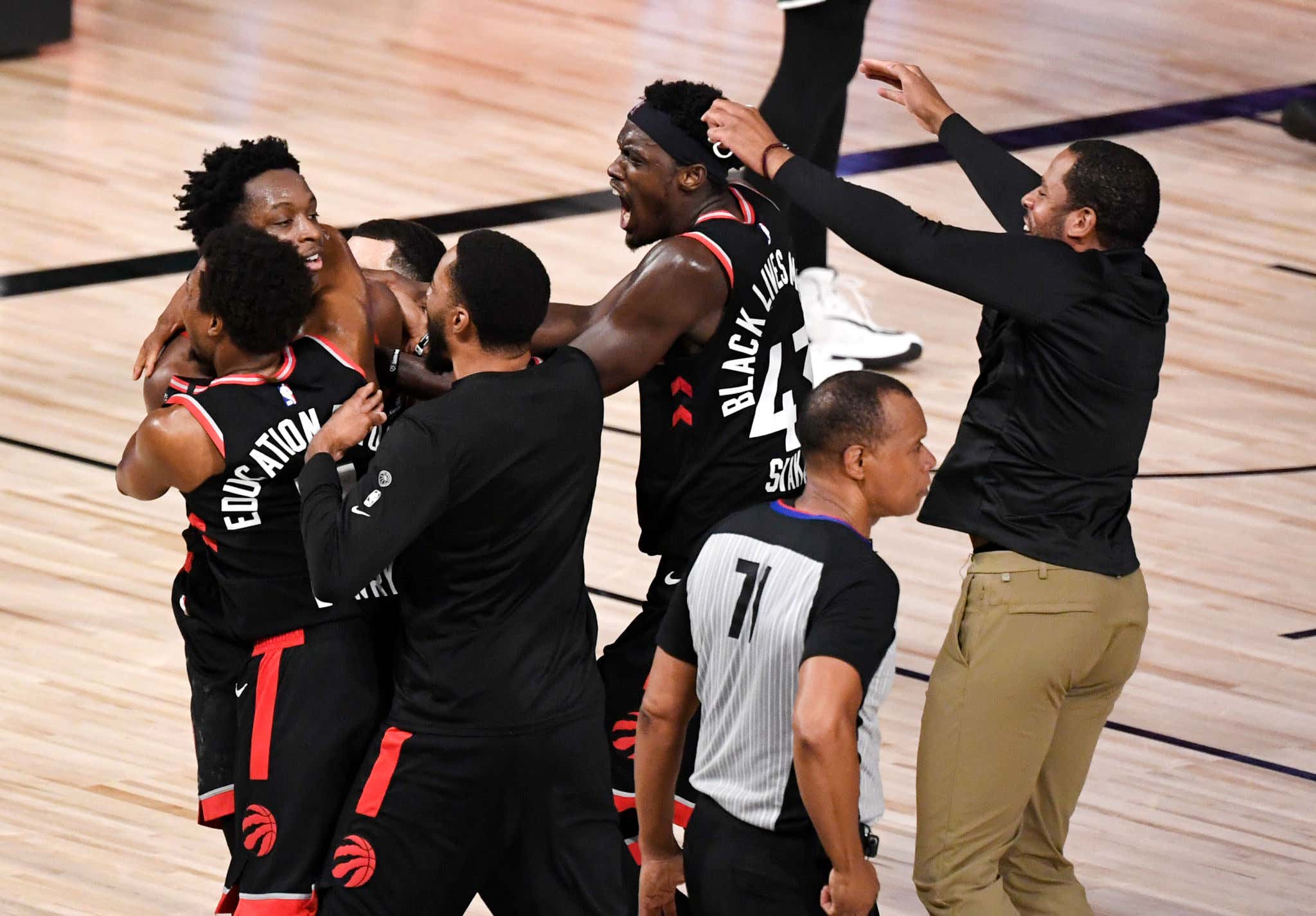 Good morning everybody happy Friday and welcome back to another edition of Last Night In The NBA where we bring you up to speed on everything that went down from the night before in the Association. Credit to me for having the courage and strength to write this blog today after what went down in our first game on Thursday night. Many are calling me a hero, but I'm just doing my job. I know there are Raptors fans out there that are reading this blog and they deserve their moment. I'm also sorry to any Nuggets fans out there that might also trying to be forget last night happened, we gotta talk about it. As always if you got busy and missed the action, here's what happened.

Don't worry, we'll talk all about the Celts in their normal postgame blog, so for now let's focus on the team that was able to keep their season alive. Because make no mistake, if the Raptors get down 3-0, that's it for them. So yeah, that prayer final play was pretty goddamn big. But before they even got to that play, there was plenty of reasons to exhale for Raptors fans. This team finally looked like the one they've seen all year and the team I think we all expected to see once this series started. We all had a feeling this was going to be a dogfight of a series and it looks like that's what we finally have.

A huge part of why TOR was able to pull this game out has way more to do with than that final inbounds play. For starters, their guard play was so much better than the first two games. Kyle Lowry set the tone early and was super aggressive, and Fred VanVleet came on late, especially from deep

It feels weird to say but when FVV starts to heat up from three my brain in convinced every shot he takes is going to do in. The man had some huge buckets. And then of course, there was OG. A player who in my book has been the best Raptor all series, especially when it comes to shooting the three

Outside of the individual performances, the Raptors also had a good amount of success once they switched to their zone in the second half. The celts offense stalled and that helped them climb back into this game in the third quarter. A 10 point lead was gone in a blink of an eye and we had ourselves a battle.

So now we have a series. Saturday night is a MASSIVE game for everyone involved. The Raptors can truly put the pressure on and capitalize this new found life, or the Celts can come out and make us all forget this ever happened by snagging a 3-1 lead. Either way the last two games of this series have been insane and I don't think that's changing anytime soon.

I had a fear this was going to happen heading into Game 1. The Nuggets not having a bunch left in the tank after their Game 7 win, the Clippers being rested and generally better, I don't think anyone is surprised how this ended up. I'll give the Nuggets credit, this was close for the first 12 minutes, but then they only scored 36 points over the next 24 minutes and it became blowout city. Mostly because they had no answer for Kawhi who shot 75% from the floor

Mook was back in the lineup and he shot 70%

and on the night the Clips shot 57% as a team. We already knew the Nuggets couldn't defend once we saw them give up a billion points to the goddamn Jazz, well now they are facing a team with real actual firepower. This may not be a sweep, but it would be a massive upset if this went 6 or 7 games. Think of it this way, they blew the doors off DEN and Paul George didn't even play that well.

For DEN, I'm not really sure what you think is going to happen when you go up against this team and shoot just 42/25% and Jokic/Murray combine for just 11-29. That's not nearly good enough.

Like I said the game was pretty much over the second they ended their 38-20 second quarter, and I think this was a wakeup call that the Nuggets are now dealing with a completely different beast in this series than their opening round.

And that's it. You are now all caught up with everything that went down last night in the NBA. Now if you'll excuse me I need to go puke my guts out and pretend none of this actually happened. Have a great Friday!