This week on Bussin’ With the Boys, Taylor and Will had on the Heisman Trophy winning Titan himself, Eddie George. For those who are living under a rock, George won the Heisman in 1995 in the closest vote in history after a wild career at Ohio State. And while his story is fairly well known (he only had one college offer from a D2 school before transferring to a military academy to straighten out his life), there’s a couple parts of his life that he opened up to the Boys that reflect who he is as a person.

The first has to do with his Freshman year at Ohio State. Check out the following article: 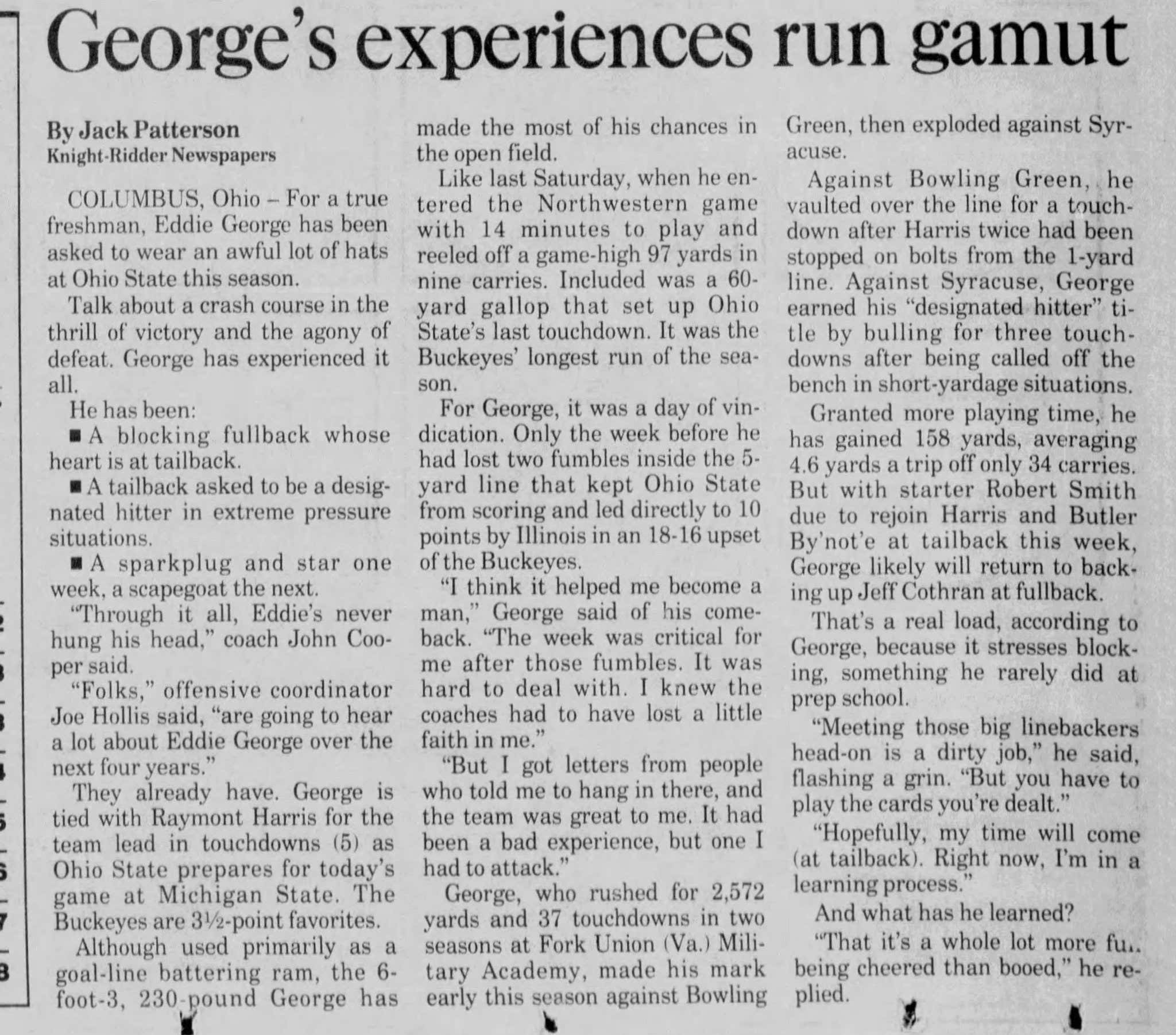 In a game against Illinois he fumbled twice inside the five yard line, and didn’t really get out of the doghouse for two years. He told the boys:

“The first carry I got on the goal line, I was thinking … what my touchdown ceremony was going to be. I get the ball, go up the middle, before I go down the ball pops out, and bounces twice on the turf and a little defender picks it up and runs it back 97 yards for a touchdown. I was pissed and embarrassed, and wanted another opportunity. [John Cooper] goes, go redeem yourself. Run someone flat over. The game goes on, we finally drive down for the winning touchdown, he throws me in the game. I get the 19 Toss, force defender comes up, I make a beeline to the pylon, take the next step, get hit in the back, the ball flies in the air. Fumble. They recovered. Game over. My season was done. And I didn’t see the field again until my Junior year. No shit. And it was in the moment between my Freshman and Junior years, that’s when I found out who I was. I had to dig a little deeper.”

It seems kind of crazy that someone with Eddie George’s talent would literally get benched for a year and a half, after ONE bad game, but even great players sometimes have to dig themselves out of a hole of their own making. Of course, he left OSU as their 2nd all time leading rusher (3768 yards) and 3rd in rushing touchdowns (44).

The second thing that stuck out for me was when he was drafted by the Houston Oilers in the 1st Round (14th overall pick) in 1996. It’s nearly impossible today to think about how bad things had gotten in Houston. He told Will:

“The first three years were difficult, having no identity. We played in front of 18k fans on average. It was VERY difficult coming from Ohio State. This is the league? At OSU we had a big huge hot tub, cold tubs, practice helmets, game helmets, practice pads, game pads … when I got to Houston, there was a bin with jock straps in it, you go in, get one, shake it out, look to see if it had any ball stains on it, and then if it was good to go, it was yours. What part of the game is this?

It looked like the facility was literally in a former Post Office building transformed. This is the NFL? [For] meeting rooms we had wooden tables like your grandma had. For lunch, we had to go down to the street to a little bodega to get Popeye’s or a sandwich. Guys smoking cigarettes in the parking lot. This was crazy! That’s the culture, that’s how they did it in Houston. Once they announced we were leaving for Tennessee, it became a ghost town. … Our last game against Baltimore, I think there were 7000 people or less in the stands. And that was including concession stand workers. You could hear intimate conversations and people talking about what they did in the stands. Those first few years were VERY VERY tough, and playing in Memphis was a travesty."

Eddie talked about a TON more, including shitting on Kirk Herbstreit’s quarterbacking, convincing Will that Covid makes your dick shrink, how the AFC Championship Game might be tougher to win than the Super Bowl, and how Joe Paterno recruited him to his dream school Penn State to play LINEBACKER. Eddie has an MBA from Northwestern and starred in the musical Chicago on Broadway, so he’s more than just a guy who ran the rock to the tune of 10k NFL yards.

Check out the entire two hour interview on the latest Bussin’ With the Boys podcast below, and don’t forget to subscribe and rate!