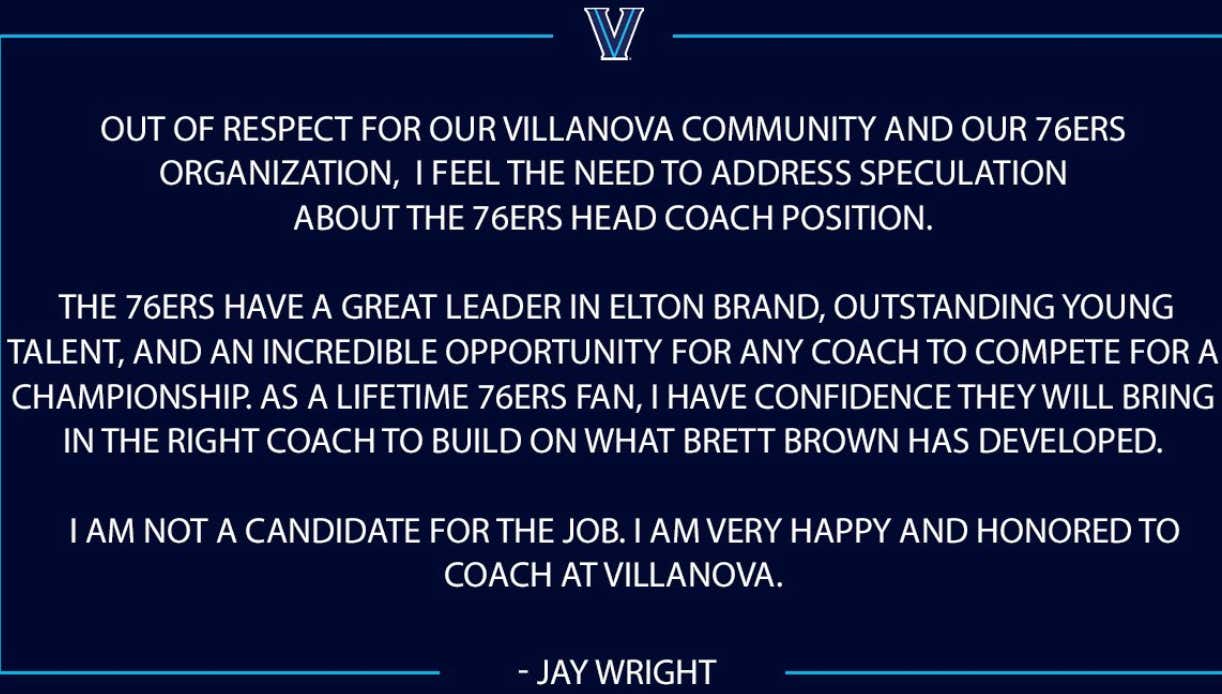 And just like that we get a big win for college hoops (again). It's actually starting to get pathetic how many times Jay Wright has to turn down the Sixers. Every few years you just know that there's going to be this rumor and Jay has to come out with a statement saying he's staying at Nova. That said this year is a bit different than the previous. First, he took longer than normal. Usually it's within 24 hours of the rumor he comes out with the statement and everyone celebrates. This time it was damn near a week. That tells me he really looked at it or at least took the call this time around. There's also the unknown with college hoops. It appears to be happening but the NBA is clearly set up for a guaranteed season more.

But it's a no-brainer. Jay Wright has a lifetime deal at Nova. Outside of setting the Pavilion on fire, I can't think of one way he gets fired. Hell, he could get caught in the pay-for-play scheme worse than Will Wade and Nova would still be like ehh, he won two titles. He turned us into a blueblood program. He's turning us into a title contender every year pretty much. Let's just ride it out.

Not to mention, the Sixers roster is NOTHING like that of a Jay Wright team. A lead guard can't shoot and a big man who has no idea what his game should be? Think about Jay Wright. He was one of the first to really embrace a bunch of guards and small ball back in the 04-05 team. The Sixers can't shoot AND they are tied up with some shit contracts. Al Horford and Tobias Harris tied up for nearly $280 million in guaranteed money? Good luck getting off of that. Feels like more and more they are just going to be stuck in the middle of the road category which is the worst place to be in the NBA. Everyone is already debating if they can keep Embiid and Simmons.

And as a college basketball guy this just feels right. Jay Wright is the face of Nova. Nova is the current face of the Big East. Keeping Jay there is huge. Not to mention, I don't think a coach has done a bigger 180 than Wright. Maybe Tony Bennett? But the joke with Wright was he had a contract clause that put him on CBS for the second weekend of the NCAA Tournament when Nova kept getting upset. Then he wins 2 in 3 years and bam, he's a genius again.