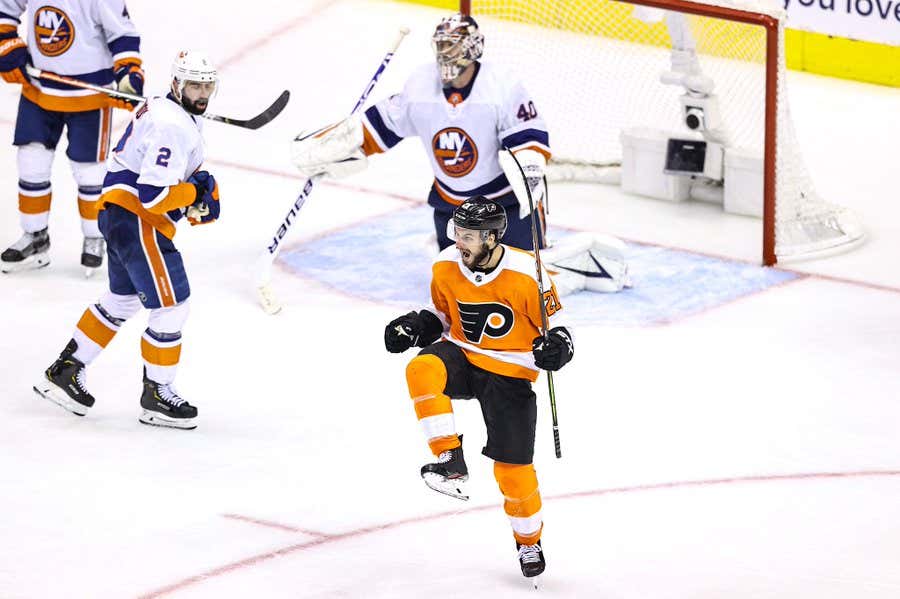 Watching the Philadelphia Flyers is a lot like watching porn. Not necessarily for the arousal factor. But the part when you're done watching and you click that "x" on the corner of the screen, close down your computer and are immediately filled with a rush of shame that you actually enjoyed watching that vile display of human behavior. You're filled with shame and guilt because you know that your kink would disgust other people. That's two times now in this series alone that the Flyers have blown multiple goal leads late in the 3rd period and forced themselves to have to win in overtime. Yet for some reason, we all come running back to the Flyers every time they play even though we know we should be disgusted. And why is that? Because we're all a bunch of heathens and we get off on the torture that they put us through.

Sure, we would all love it if the Flyers would make it easy on themselves just one time. We all had our share of fun during the round robin stage when it looked like this team was just going to shit pump their way to the Stanley Cup Final and never have any extended periods of chaotic meltdown. But those wouldn't be the Flyers that we know and love. The Flyers that we know and love make everything at least 10 times harder for themselves than it needs to be, and last night they put on a MasterClass. It's just a constant battle between "holy shit, this is awesome!" and "I want to die". It just goes back and forth all night long and you just pray at the end of the night you're on the right side of the battle.

"Holy Shit, This Is Awesome"

Ladies and gentlemen, the Claude Giroux 2020 Stanley Cup Playoffs Era has officially begun. For the first time since entering the bubble, The Captain has gotten himself on the board. And what a necessary goal that was. Not only just for that series, but for the legacy of Claude Giroux in Philly.

For some reason I feel like there are way more Claude haters in Philly than ever. I get that he wasn't scoring, and that he hasn't been scoring in the playoffs really at all since that 2012 series against Pittsburgh. But with the way that the team is built this year, he doesn't need to be the one to do all of the scoring. I mean it would be nice if he is out there lighting the lamp every night but the Flyers have 3 really good lines filled with guys who can get themselves on the scoresheet. So Giroux hasn't been nasty during these playoffs by any means, but he's been playing some really good hockey. He just hasn't been able to put the puck in the back of the net. That is, of course, until last night. And pretty much every night that the Flyers' season is literally on the line.

PPG in elimination games. The Captain just saves his best for when the team needs him the most. And considering the next 2 games are also elimination games for the Flyers, it would appear that The Captain is just getting started. So I can't wait for all the Claude haters to promptly eat shit and go fuck themselves after this series.

Speaking of guys who really needed to get themselves on the board and get that monkey off of their back…Jimmy Van Reemer!!!

Saucy dish from Laughton. And then even though JvR tried his hardest not to score here, the Hockey Gods finally rewarded the pigeon with a much needed goal. The Flyers were looking like they were in scramble mode for most of that 2nd period after the Islanders took the 1-0 lead. So for Giroux and JvR to both get themselves on the board near the end of that period to not only settle the nerves but also get the confidence going in a couple of guys who desperately needed it? Huge huge huge. 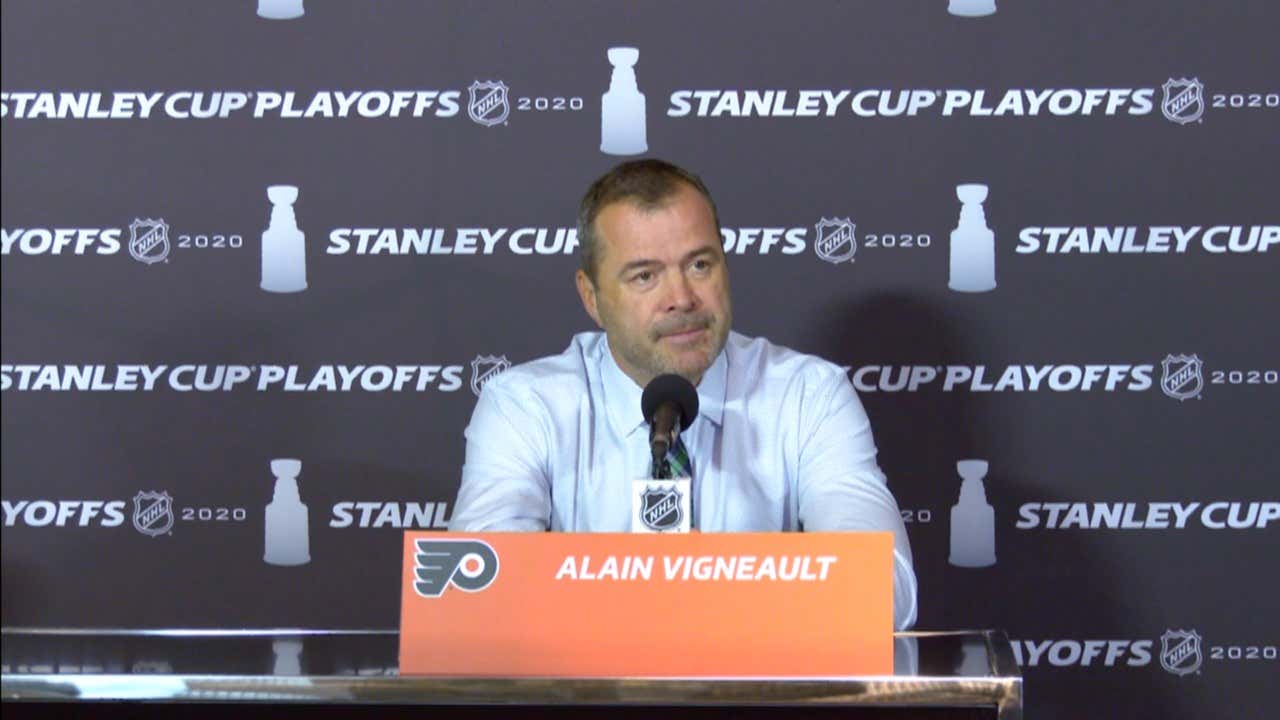 Folks,,,,I think it's time to admit that we might have an Alain Vigneault problem on our hands here.

As Flyers fans, we all just did our best to disregard that. We figured they were a bunch of salty exes who were just pissed off he couldn't get it done there. But this was a new team and this was a new chance for AV. We just assumed there wasn't a chance those issues would follow him here. And then…well…I mean…what the fuck, dude?

It shouldn't be this easy to predict but it is. As soon as the Flyers get themselves a lead in these games, they just start to sit back. As if a team who is currently losing in a playoff game isn't going to get exponentially more intense as the game goes on. But instead they just shell up and pray for the clock to move faster instead of sticking to what got them the lead in the first place. This team is god awful when it comes to playing with the lead, and that seemed to be the case in New York and it seemed to be the case in Vancouver. Sure as shit seems like it's a Vigneault thing at that point, no? And here's why. 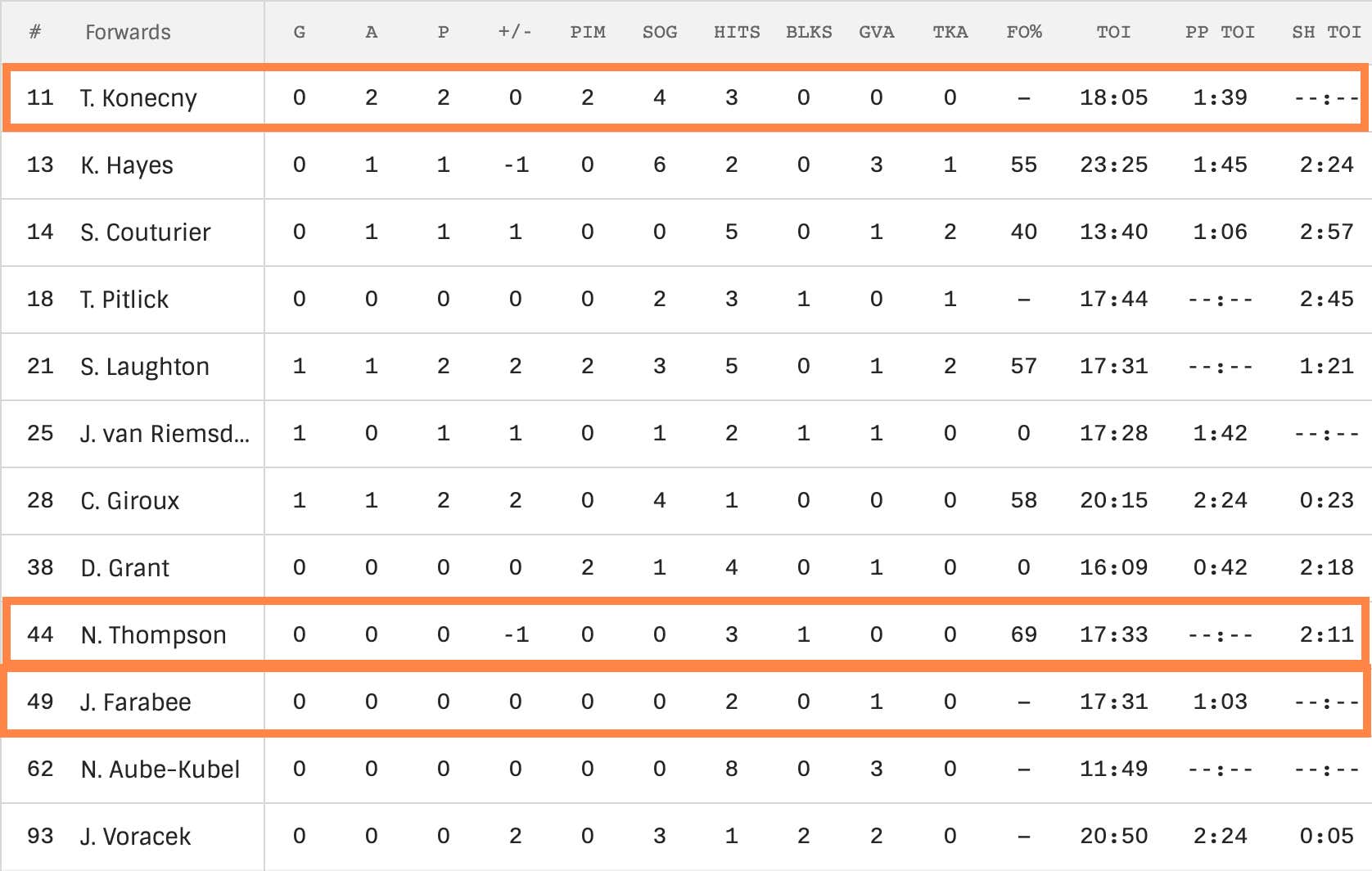 Why in the actual fuck does Nate Thompson have pretty much the same ice time as Travis Konecny and Joel Farabee? If it's because you think that Nate Thompson is great on faceoffs and is more responsible in the defensive zone so you can trust to put him out there and make sure the other team doesn't score well then you're completely wrong because it keeps happening all the fucking time.

And yes, I know that Hayes and Konecny were out there with him too. But this has been a running theme all playoffs so far. How many times have the Flyers scored a goal and then on the very next faceoff, AV puts the 4th line out? Like this dude is addicted to having Nate Thompson out on the ice and it doesn't make sense at all. I don't even hate Nate Thompson that much. I think if you put him out there for 10-12 minutes a night, I'd actually love Nate Thompson. But when he's not only getting 17 minutes per night but he's also getting into the game at massive momentum turning points? Well then you force me to hate the guy. Which sucks because he shouldn't even be out there to begin with. It just seems like AV thinks he knows what is best and even when he's been proven wrong countless times, he's too stubborn to adjust.

"Holy Shit, This Is Awesome But Also I Want To Die"

Speaking of AV being too stubborn to make adjustments, there was one that he was forced to make during this game. When Sean Couturier went down with a lower body injury, Vigneault was forced to jumble up the lines a little bit. So he started off the night by putting Tyler Pitlick on the line with Kevin Hayes and Joel Farabee. Which, in theory, wasn't the worst decision ever. Pitlick is a little spark plug out there who can move really well, so he would fit in speed wise with that line and could help them grind on the forecheck. The only issue is that he's just not skilled enough to play with those guys. So it just wasn't really working out. There were a few times when that line had a chance to apply some real quality sustained pressure in the offensive zone, but Pitlick just got in the way and the play died down. That's nothing against Pitlick, he's just much better suited to play on a grind line instead of a skilled one. But if not for Couturier having to leave the game, I doubt Vigneault would have made that switch. But his hand was forced and eventually he moved Konecny back onto that line with Hayes and Farabee. What happened next?

Absolute piss missile from Niskanen. But that play is all Travis Konecny being patient enough and skilled enough to get that pass over to him. You see Hayes intercept the breakout pass at the top of the zone. Hayes is always going to be looking to make a quick play out of that and he's able to find Konecny down by the faceoff circle. Now if that were Pitlick in that position, I don't think he's able to handle the play developing so quickly. He either loses the puck or just tries to wrap it around the boards and hope they're able to win a battle in the corner. But Konecny is so patient. He has the hands to hesitate for a little, see the ice, find Niskanen across the ice and sets him up to step into this bullet. 3-1 Flyers all because Hayes gets the puck to Konency instead of Pitlick.

Now the "I Want To Die" portion of this is, of course, that Sean Couturier was unable to finish last night's game. And Couturier doesn't just leave games for no reason. It has to take something significant for him to not finish a game. So that's not great. Still nothing official yet so maybe he was able to catch a break. But I'm not looking forward to that update coming out later today.

You know at the end of a roller coaster when you think you had fun but your stomach is still in knots so you're still not really sure and you're just happy to get off the ride? Well thank you Scott Laughton. The Sergeant becomes just the 6th Flyer to score an overtime game winner when the team is facing elimination in the playoffs. He joins legends like Ville Leino and Joffrey Lupul now. So just keep that one in your back pocket for trivia night.

It wasn't pretty. I really think somebody needs to force Alain Vigneault to take today away from hockey so he can just reset his brain. There are still plenty of issues with this team. But a win is a win, and that's all that matters. The season goes on and all you have to do is just keep taking it one game, one period and one shift at a time. A win on Thursday and the series is tied up again. Crazier things have happened, but just stop putting Nate Thompson out on the ice in key moments. I think as long as they can stick to that game plan, this thing can go the distance.