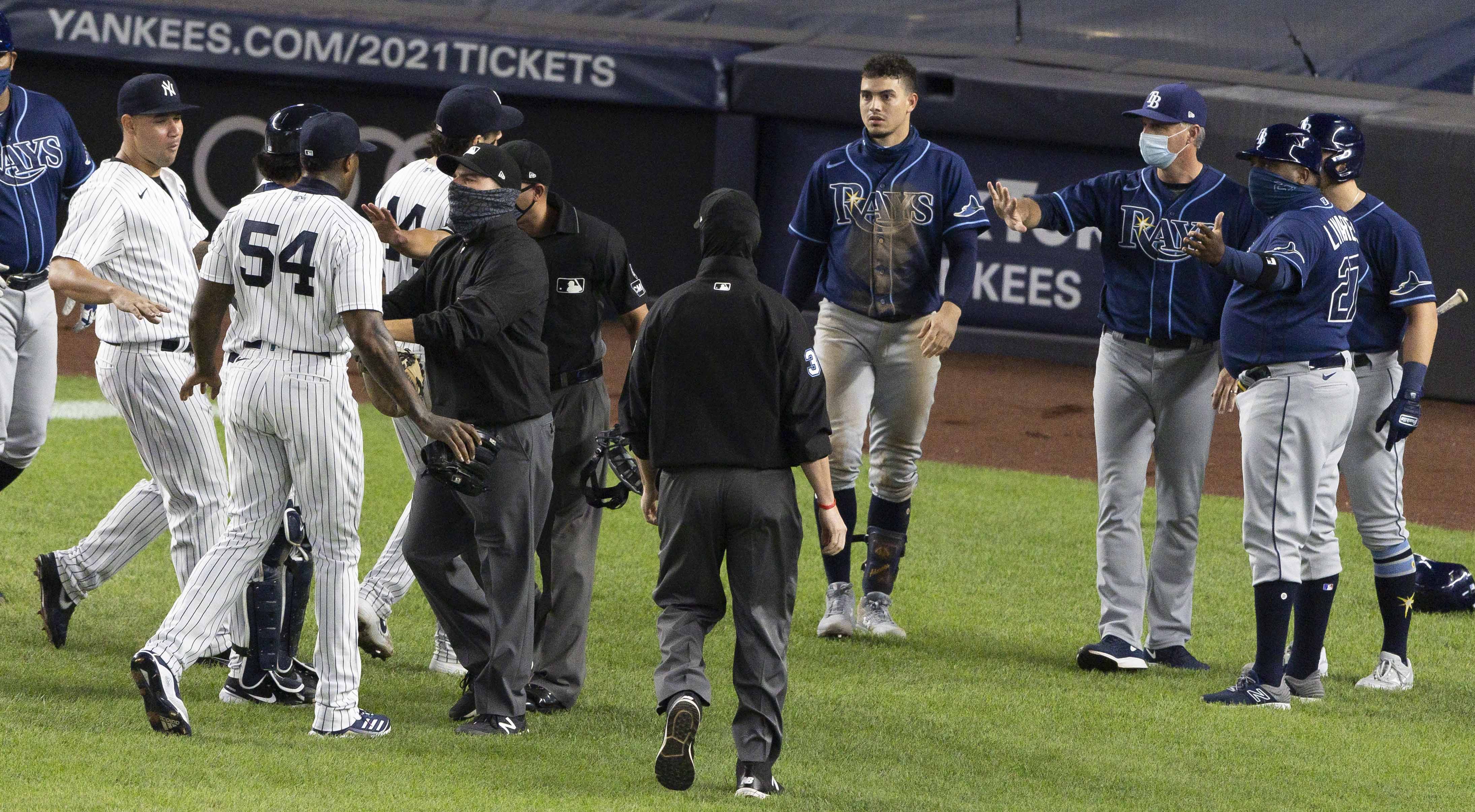 There is nothing better in sports than a good old fashioned rivalry. I'm talking two teams that absolutely despise each other. The Boston Red Sox have sadly fallen into irrelevancy and obscurity. They no longer care about winning or anything that doesn't involve saving money. Their rivalry with the New York Yankees has vanished into thin air. But with the death of one thing, comes the birth of another. The New York Yankees and Tampa Bay Rays legitimately hate each other and have started a war. We have ourselves a rivalry.

Tonight the Yankees won their baseball game 5-3 over the Rays. Masahiro Tanaka was fantastic. DJ LeMahieu smacked two homers. Gio Urshela laced a go ahead 3 run little league homer as Kevin Keirmaier misplayed a ball in center. It was a much needed victory for the Bronx Bombers, but the real fireworks started with the last batter of the game, Mike Brosseau. With two outs in the 9th and a two run lead Aroldis Chapman uncorked a 101 mph fastball near the head of Brosseau.

Brousseau and the Rays were not happy. Anytime you get 101 buzzing at your noggin' you're obviously going to be pissed and bug out. Can't have guys head hunting on purpose and if one team suspects the other of doing that there's going to be problems. These players and coaches do not like one another and tensions are always going to be high because of that. I feel like every game someone is saying shit or barking from the other dugout. That all being said I really don't think Aroldis Chapman was throwing this ball intentionally at Brousseau's head. Heading into tonight the Yankees had lost six in a row to Tampa and were fading in the standings. You really think the Yankees wanted the tying run to come to the plate, especially the way they lost games last week? I really think that's an overreaction by the Rays and Kevin Cash. It's natural to get pissed in the moment, but afterwards to still think it was intentional? Get the fuck outta here. After the final pitch (a Brousseau strikeout) the benches cleared and the Rays were still not happy campers. Listen to Kevin Cash after the game cry like a little bitch as if the Tampa Bay Rays are the gold standard of baseball. Regardless of what he says in the below clip, trust me these guy have instigated a ton over the last few years.

The Rays skipper could not come off like more of a pussy here. "Poor judgement, poor coaching, poor teaching." Buddy who the fuck do you think you are? Listen to yourself talk. This has been back and forth for years. Also realize the situation one time for me guy. You wanna say Tanaka beaned Joey Wendle on purpose in the first with two outs and no one on? Sure that's reasonable, I'm with you there, but there's nothing wrong with the way this was done. The Yankees have been thrown inside all season by Tampa. None of these guys like each other and following DJ getting thrown at last night they started the game this way. That's baseball.

Now because Aroldis Chapman let a fire ball loose you think it was the most intentional thing of all time and he was trying to kill Wendle? That's just wrong. I totally get that 101 near your head is terrifying and dangerous and has no place in the game, but also realize Chapman isn't the most accurate pitcher in the world and throwing intentionally there made literally zero sense in terms of game situation. Look at Chapman's location so far this year on fastballs.

Not exactly Greg Maddux over here. It was his fourth game back. I think it's safe to say he's rusty. Just ask yourself why on Earth would New York put the tying run at the plate? I can't ask that question enough because it makes zero sense to do that!

To say Chapman was head hunting on purpose is insane to me. If you don't like the Yankees you're going to disagree with me. That's how this works, I realize that, but read the situation and come back to me then with a sensible mindset. Yanks aren't trying to put the tying run on the way they've been playing. They need to win every game they can and throwing at Brousseau in that spot would have jeopardized the lead.

As for what Kevin Cash said about having a stable of pitchers throwing 98 mph, I love it. Well, I can't stand his existence, but those were fightin words. That's shit that will piss off the Yankees and give them bulletin board material moving forward. We've got legit bad blood brewing and it's fun. No one is scared of that threat from Kevin Cash, but it's sure as hell gotten the Yanks' attention. This is the kind of shit that sparks a club and gets them going. I'm fucking ecstatic for a new legit rivalry. You've also angered DJ LeMaheiu. Good luck. Expecting a 6 for 6 game with 3 homers from the machine.

Get me to tomorrow.

P.S. Sign CC Sabathia for one day and let him loose.