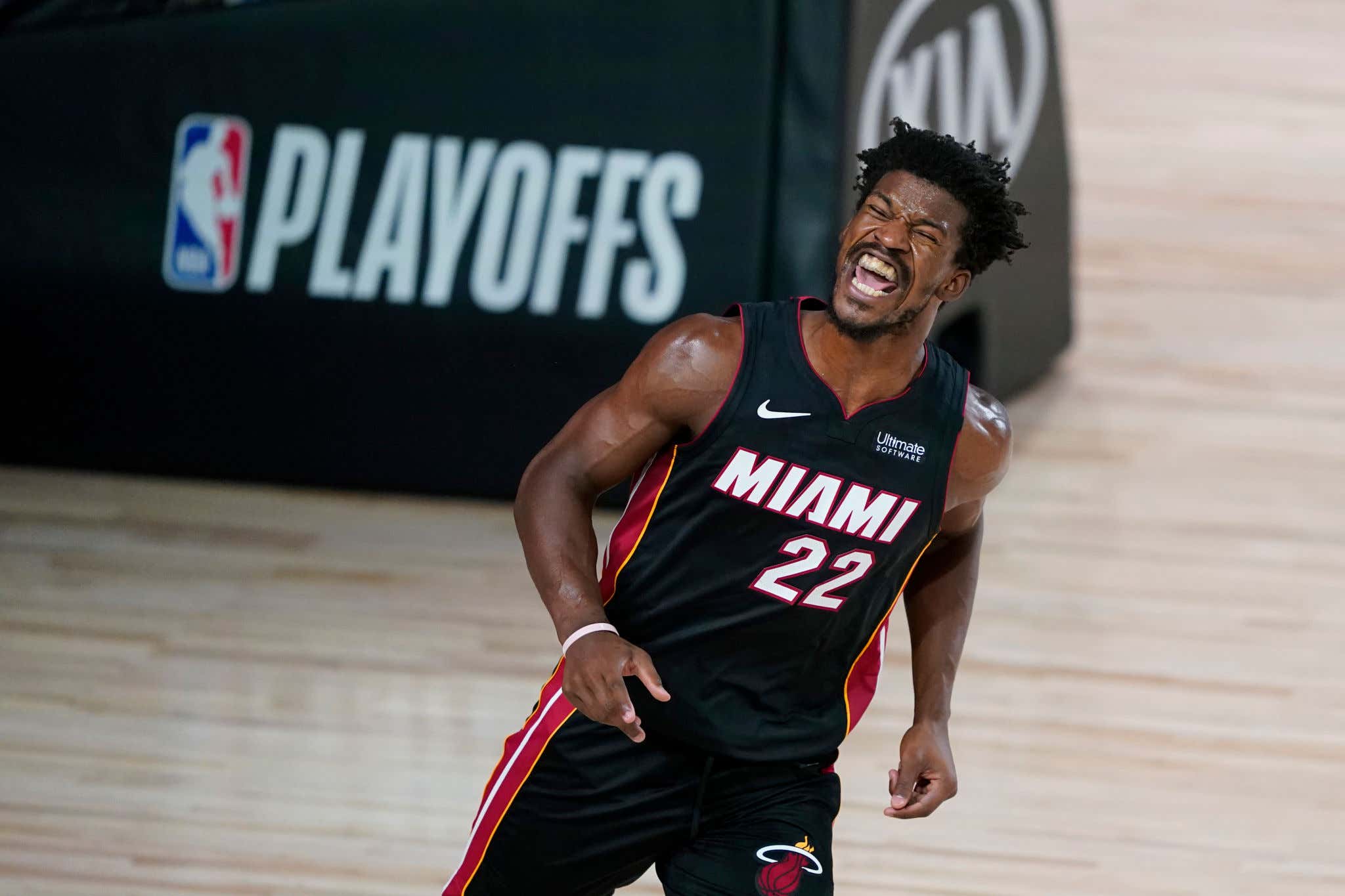 Good morning everybody happy Tuesday and welcome back to another edition of Last Night In The NBA where we bring you up to speed on everything that went down from the night before in the Association. I know I pretty much say this with every one of these blogs I write, but it's always true. We had ourselves another incredible night of playoff basketball in the bubble. Two highly anticipated matchups most certainly did not disappoint and that's really been the theme this whole restart. The quality of these games has been so spectacular I couldn't imagine not watching. But I know shit happens, you get busy, maybe you fall asleep on the couch, so if for whatever reason you missed some of the action last night here's what happened.

Maybe it's just the Bucks thing to drop the first game of the second round, but this was a matchup where the Miami Heat had a lot of buzz heading into it. They are a team that matches up pretty damn well with the Bucks and Game 1 was a perfect example of that. Once they absorbed the initial blow from MIL and settled down defensively, you saw why this has the makings of a potentially long series. It's hard to talk about the Heat and start anywhere other than Jimmy Butler, holy shit what a performance

A career night for him, we knew he would rise to the occasion. Jimmy Butler is not afraid of Giannis or this Milwaukee team. What's crazy is that somehow during these playoffs Jimmy Butler is turning himself into a clutch three point shooter. You may think that isn't a shock, but remember this dude shot 24% from three during the regular season. It just goes to show that in the moment, none of that shit matters. They don't call him Jimmy Buckets for no reason. In the preview to this game I also talked about Goran Dragic and what a monster he's been this entire postseason. Well, this is why I mentioned it

He finished with 27/6/5 on 9-15 in his 33 minutes and he completely owned his matchup. This is where not having Eric Bledsoe defensively hurt MIL. You combine that with the do it all performance from Bam with his 12/17/6 with great defense and that's how you win despite only making 12 3PM. I think we all thought the only way MIA was going to win was if they were lights out from deep, but they shot just 12-31. Instead, they did it on the defensive end. After giving up 40 points in the first quarter their defense allowed just 23, 23 and 18 points. Against the Bucks. I dare you to try and tell me that's not impressive. Giannis and Middleton were just 3-10 in the fourth quarter. That's clamps like you read about. As the series goes on, I imagine the Bucks offensive will figure things out a little bit, but I also expect the Heat to shoot better from the perimeter. That's why Game 1 was so important for them to steal. They did that, they have won 5 in a row and this team is absolutely rolling.

For MIL, I'd say on most nights when Giannis/Middleton/Lopez combine for 70 points they usually are going to win. Especially when they shoot 49/45% as a team with 19 3PM. We've seen that story a billion times over the years and it usually ends with the Bucks coming out on top

So what the hell happened? Well for starters the 19 TOs certainly didn't help. Neither did the 12 missed FTs. Outside of those three that I mentioned no other Bucks player really stepped up and decided to show up. Their starting backcourt didn't do shit, they got even less from the second unit, and they had no answer for the Heat's defensive adjustments. You obviously don't panic because after all this is the goddamn Bucks we're talking about, but all this loss does is feed into the Heat hype even more. It puts more pressure on Giannis and Middleton to find a way to not disappear late in games. This also isn't the Orlando Magic. You can't drop Game 1 and then pay it no mind. You give the Heat an ounce of life and you're playing with fire.

I'm sorry to any Rockets fan out there who now has to deal with the stress of another Game 7. Not just any Game 7 either, but one against Chris Paul. They had by my count no fewer than 10 billion chances this series to put OKC away and they choked each and every time. That has to have you a little nervous given their history. I can only imagine what NBA Twitter will be like if they drop this game and lose to OKC in the first round. Sadly, if they can't figure out how to get Russell Westbrook and Harden both going in the same game, that very well might happen. Less of the combining for 12 TOs (including one HORRIFIC one by Westbrook in the final seconds), and more of the whole being an unstoppable backcourt thing.

Here's the thing about that last possession. How is James Harden not demanding the basketball? I can understand having trust in your teammates, but come on. This is your team. Westbrook has been back for like 5 seconds. You have to demand the ball there and be the one that decides things. This was a team that had a 6 point lead with 4 minutes left and scored 2 points the rest of the way. That's a choke job. Their 22 TOs are something that just can't happen. Eric Gordon going 3-12 is picking the wrong time to go cold. I feel like all the Rockets postseason losses look the same. For stretches they look unbeatable, then they go cold, they get exposed defensively and the next thing you know it's more heartbreak. It's just as likely they made 25 3PM in Game 7 as it is they choke once again. I don't know what to think about this team right now.

For OKC, what we do know about them is they are going to fight their dicks off. If the game is close in the fourth quarter they have the best clutch player in the league this season on their side. It's no surprise that when it came to winning time, Chris Paul came through

Huge threes in the final moments, clutch FTs, he's built for these moments. But let's give some credit to his supporting cast as well. Gallo was rock solid as a secondary scorer

and Lu Dort absolutely redeemed himself with a huge third quarter

To be honest the Thunder didn't even really shoot the ball all that well, just 42/33%, but all they have to do is keep things close and let Paul take over. We are now blessed with another Game 7 in what I can only describe as a true toss up game. You could tell me either of these teams will win and I wouldn't doubt it for a second. It's going to be tremendous theatre and I cannot wait.

And that's it! You are now caught up with everything that went down last night in the NBA. We're back today with two more games and unfortunately you do have to wait until about 5:30pm for the action to start. But if they end up being anything like what we got on Monday, it'll be worth the wait. Have a great Tuesday!