The following quote comes from my friend Ryan Moody who has a Youtube channel where he breaks down the flaws and mistakes that Madden continues to show each year. "Imagine a Christmas every year where you're told you're going to get a brand new car and instead, and you open a box of socks. That is the exact disappointment that Madden has given us. It's a pair of uncomfy socks that make you go to the trash can and throw them away." EA Sports once again slid down our chimney this year and left us a copy of Madden 21, which is equivalent to a pair of socks.

Madden is a monopoly, which means Madden has 0 competition. Why? It's because EA Sports has been under contract with the NFL for the past 16 years where they have exclusive rights to being the only company to sell simulation football games. This contract started after 2K sports released NFL 2K5 with Terrell Owens on the cover. It was and still is the BEST football game ever created! Not only does this game have better quality gameplay than most Maddens, but it was half the price! $30 for NFL 2K5! You name it, this game had it. Cheerleaders, refferes, a pregame show, a halftime show, ESPN broadcasting, 1st person mode, MyCrib, it had everything that made the game feel as realistic as watching an NFL game. Anyone who bought this game pretty much ROBBED 2K!

When EA realized this would be a problem, they immediately signed a contract with the NFL that would prohibit any video game company from making simulation football games involving real life NFL players and teams. It was the coldest and most heartless move the gaming community has ever seen. Since the contract started, EA went about their ways to create what looked to be a promising franchise, to eventually a one way direction that would focus on microtransactions mooching off of the credit cards of children's mothers.

While NFL 2K5 was great, Madden 05 with Ray Lewis on the cover was pretty good too. Besides 08, I'd argue Madden 05-09 were solid games. However, I'm here to argue Madden 08 was the best Madden ever created. The Vince Young cover just hits different. 08 included NFL combine testing, superstar mode, high level IQ gameplay where players would reach for the pylon or tip toe near the sideline after catching the ball, and great commentary. I can't praise how great 08 is and how embarrassing it is to say this game is light-years ahead of today's trash Madden.

From my experience, I believe the franchise started to fall after Madden 13 with Calvin Johnson on the cover. Ever since 13 came out, it felt like EA Sports would just copy and paste the same shit each year. Don't believe me? Well you're in luck because that brings me into a fan favorite game mode that EA doesn't give a shit about, Franchise Mode.

What makes this year's Madden notable is the outrage that's been seen on social media this year. Unless you were living under a rock, you've probably seen the #FixMaddenFranchise trend on your timeline. It's one of the most beautiful trends I've ever witnessed. Millions and millions(I'd like to think) of devoted gamers came together to create a movement that's main goal was to sound the alarm clock for EA Sports to wake the fuck up and listen to their consumers! The Madden community made it clear that they wanted a shitload of improvements to this game mode.

The trend was so powerful that it made EA Sports executive producer Seann Graddy respond to the community.

Even though Seann who looks like Steve Kerr mixed with Sean McVay was clearly reading off of a script, this was something Maddens fans have never seen before. Acknowledgment from EA! It's quite simple really. All we want from this game is for Franchise Mode to be new and improved! We have accepted the fact the focus of this game is microtransactions and Ultimate team (which we will get into later), but the Madden community has expressed for a long time how this game mode has been our last resort to having fun with our friends. Besides, 99.9% of consumers who play Franchise Mode aren't making it to the NFL anyways. This is our fantasy world where we can pretend we made it to the league and we can control our destiny. 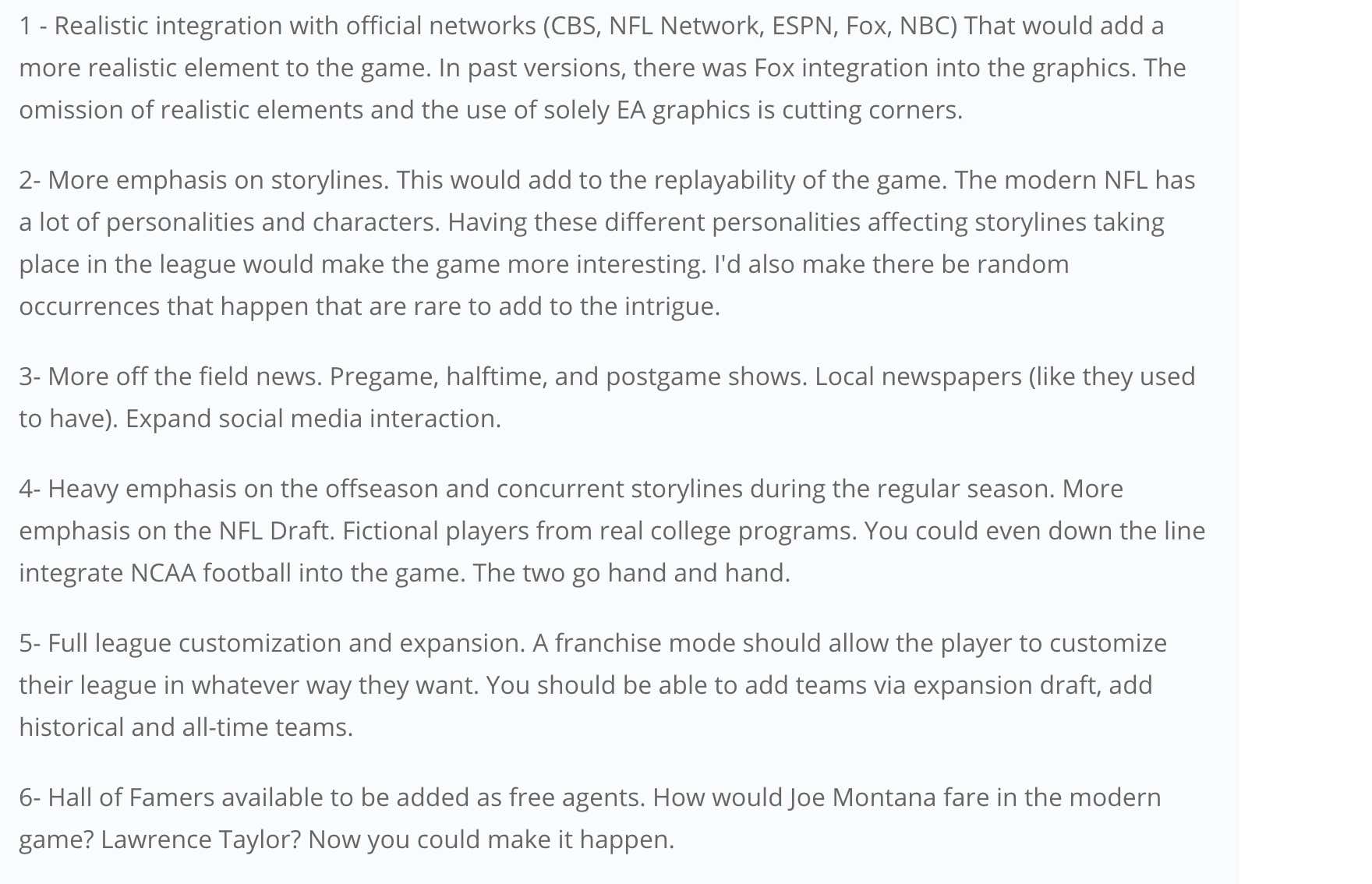 You'd think we'd get at least one of these requests added in from EA, right? Wrong! What did we get instead? We got a new personalized main menu screen. 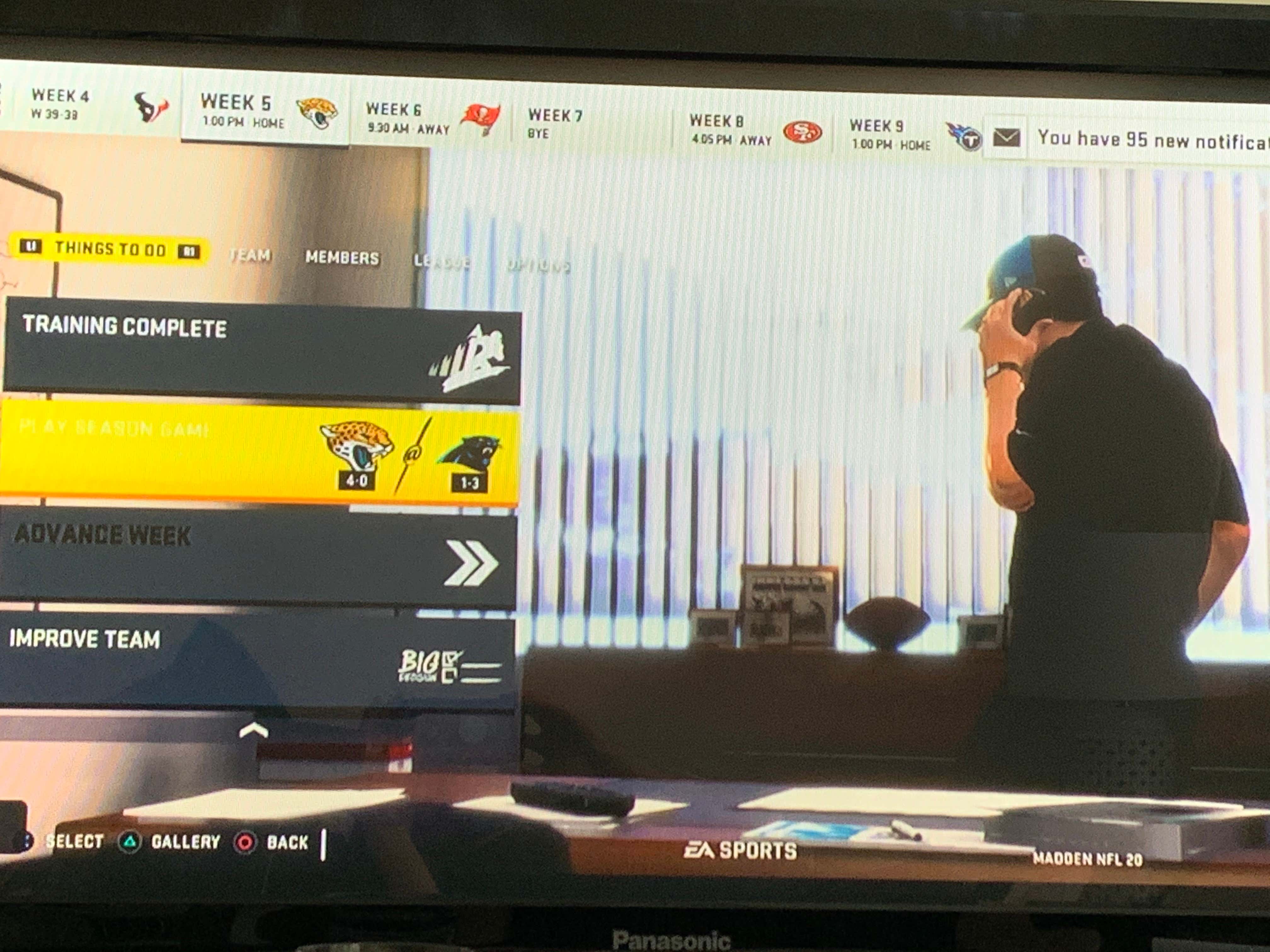 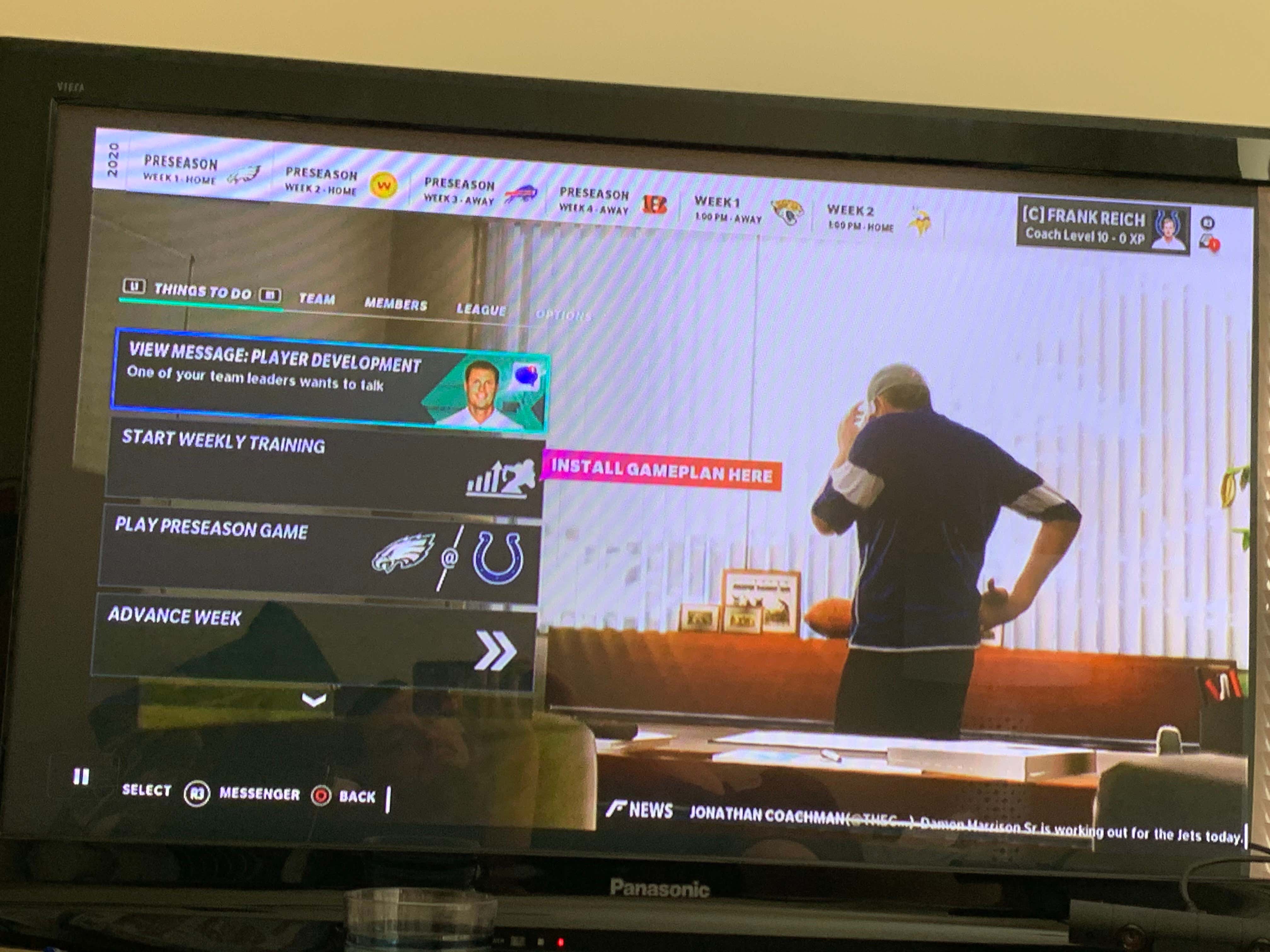 What a slap in the face by EA Sports! Actually no, this was a kick to the gut, punch to the face, and an Undertaker Tombstone to the dome by EA! Are you telling me that the amount of tweets, blogs, comments, and requests that EA gets from us 25/7 doesn't make them think "Hey, the fans are demanding we add and fix some features to Franchise mode. We should probably do something about it". Especially during a PANDEMIC when there isn't shit to do but sit in front of a desktop and make fixes to this game??

I had high hopes there would be a change to Franchise Mode, but then I remembered EA Sports did not release ANY Madden 21 gameplay all year besides their reveal trailer. It's like EA was hiding this game from us all year until release date because they knew this was going to the EXACT same game as last year, and the year before that, and the year before that, and so on.

Franchise mode is the same thing as last year. No improvements, no new features, just a new blue and green background. Unacceptable. Are they saving the fan submitted requests for Madden 21 when it launches on the new Xbox and PS5 this fall? Probably not but I'd like to think so.

For the past few years, which has really felt like 20 years of suffrage, EA has switched their focus on creating quality gameplay, to microtransactions. Microtransactions are digital purchases where you can buy map packs, exclusive weapons, and unique characters in your game for an additional cost. Microtransactions have been a huge key to Maddens success and a huge key to their gamemode Ultimate Team. This is a game mode where you open up cards and build your team. It's been Maddens biggest seller for years now. There's thousands of Youtubers that post videos of themselves opening cards and busting a nut over a 99 overall Michael Vick card.

These brainwashed videos have manipulated kids that haven't hit puberty yet to grab their mothers credit cards and go ham on the purchase button just to give EA more power than they deserve. As much as I hate to say it, I have to give props to Madden for figuring out their business model that has made them the $41 billion company they are today. Ultimate team has taken over Madden and doesn't seem to change anytime soon.

With the success of this business model, EA has added a new microtransaction dependent mode to this year's Madden called "The Yard". The Yard is a 7 on 7 gamemode where you pretty much have to pay to play if you want to look the best and play the best. It's like MyPark in NBA 2K if you've played that mode. You can also buy upgrades for your player if you don't feel like working hard and completing challenges. EA Sports. It's in the bank account.

Oh boy! Where should we start? Should we start with how blocking is a problem? Sounds good to me! Tell me, name a Right Tackle that would protect a blitz like this:

Is this how a left guard goes around the line to make a block?

How about this block? Or was this even considered a block?

Not only is blocking broken, but so is running the ball.

Not only is my gameplay piss poor, but so are others.

If you can make a living off of pointing out the flaws of Madden at least 10 times a day, everyday, you must understand this game is a joke.

Lack Of Attention To Details

Calling EA Sports lazy is an understatement. Do you remember last year when Madden 20 came out and they still had the Madden 19 logo shown in practice mode?

Well guess what EA did this year!

That's right! They left the Madden 20 logo on the practice field of Madden 21. Too lazy to change a number. Does EA Sports go over a checklist when they "finish" making the game or do they just celebrate before preseason starts and pour some shots? I want to know the requirements on being able to apply for a job at EA Sports. Surely my Online General Studies degree can qualify me for an interview for the CEO position, right?

How about the fact that Lamar Jackson, like many football players, wears a mouthguard but is unable to wear one in the game?

You can have players wear mouthguards in The Yard but can't have them be worn in an exhibition game. Incredible logic from EA.

Oh, and how about the fact there aren't any cheerleaders, referees, ball boys, or equipment managers on the sidelines during the games? I used to be a ballboy for the Colts so I'm always looking out for my boys, but HOW ARE THERE NOT REFEREES ON THE FIELD?? Referees only pop up when there's a flag cutscene or when a play is under review. No pregame show, no halftime show, no post game show, same announcers, same commentary, no attention to details!! I am convinced EA Sports hides this game from John Madden in fear he might faint to death if he were to see what this franchise has become!

The Way EA Responds To Their Consumers

If you can't get enough entertainment from how bad Madden 21 is, you should hop on Twitter and check out how EA and it's employees respond to fans. One of my favorites right now was the exchange between EA and randomfrankp.

That's right folks. EA didn't think twice before checking to see if this fan submitted video was actually making fun of their game. But if there's one Twitter reply that never fails to make me laugh, it's from the big guy Clint Oldenburg. The former NFL offensive lineman is a ratings adjustor for Madden. You think this guy knows how to rate a player when he can't even take criticism seriously?

Well, 2 is better than 1! If I were a Madden ratings adjustor, I don't know if I could say that with a straight face. Thankfully, Clint didn't have to because he used his big ass thumbs to reply. Can we send Willie Colon to EA Sports headquarters and let him intern for a day or two to see how stupid these guys are? Is this real life? EA Sports needs to hire NFL players that won Super Bowls or have been to Pro Bowls. You know, guys that actually have knowledge of the game. NOT guys like Clint who averaged a pancake or two during the preseason.

This game deserves to be a 1/10. It's unrealistic, it's heartless, it's the same Madden you've been playing for years. The game lacks real life physics and is animation dependent. Anyone who thinks there's nothing wrong with this game or franchise needs to be checked for brain damage. However, I am giving Madden 21 a 2/10 because they added my boy Jack Harlow and his song 'Automatic' onto the soundtrack of this game. 2/10 is a terrible score for a video game but if you ask Clint, 2 is better than 1! 2 is also better than a 0.3/10