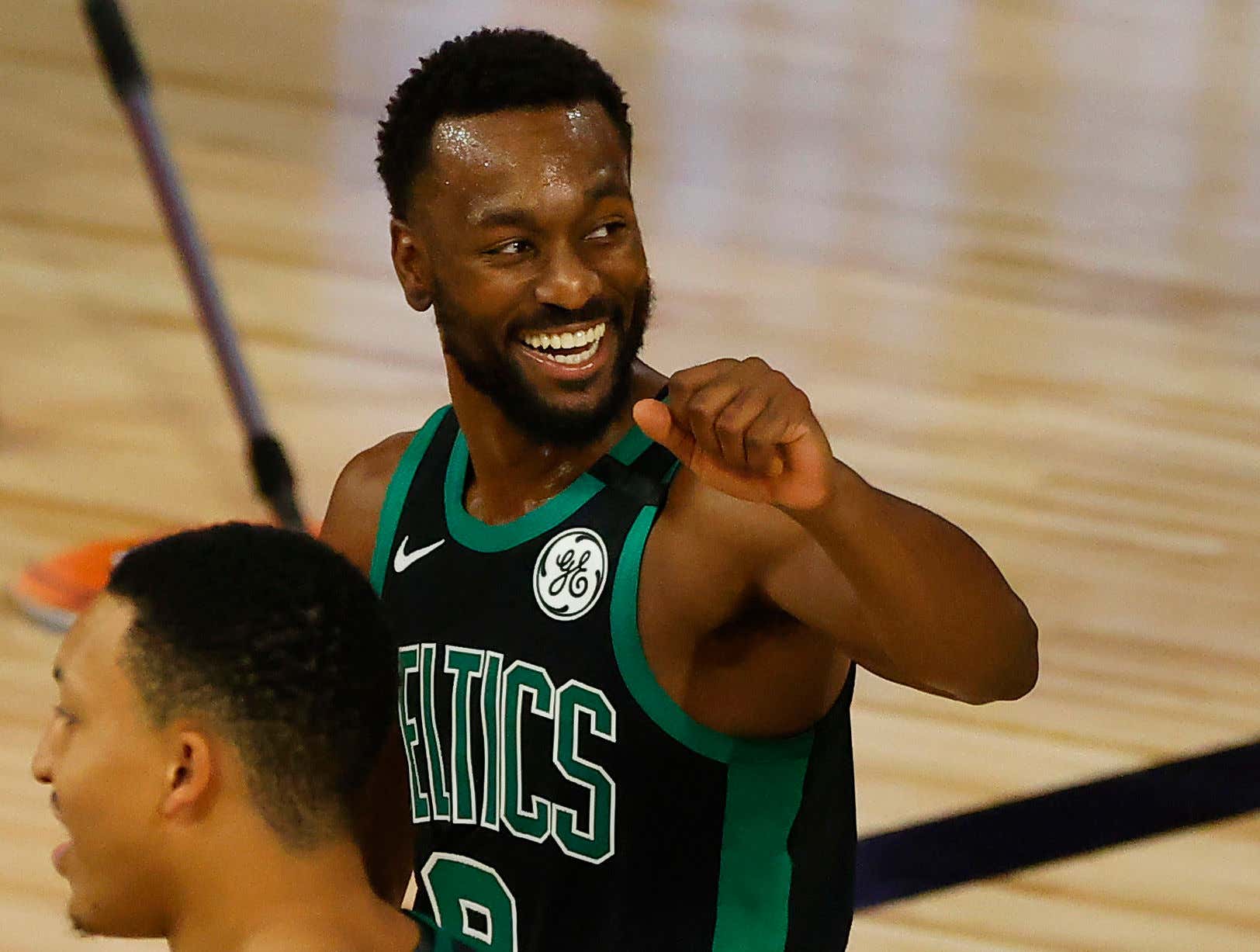 I know I shouldn't have to say it, but I'm going to say it anyway. Everyone take a deep breath. Sure it was awesome to see this Celtics team come out of the gates blazing and completely dominate the Toronto Raptors. Highly recommend they play like that again. But in no way does this mean the series is over. Far from it. I don't think I have to mention the second round last year so I won't. Take this one game at a time, one quarter at a time, one possession at a time.

Having said that, the Celts have played the Raptors twice so far in the bubble for a total of 96 minutes. They have trailed for a total of zero (0) seconds. That's right. The Raptors have not had a lead for even one second of their last two meetings. Not even 2-0. I feel like that's pretty good but who am I to say. When the Celts play with this type of energy and effort for a full 48 minutes, I don't know who beats them. Now facing a real opponent in these playoffs, a team that has had an elite defense all season, the Celts basically did whatever they wanted. Everything the Raptors tried to throw at the Celts they had an answer. It's hard to have a better start to a playoff series and while there is a whole lot more work to do before this thing is over, this now makes 5 straight playoff wins and 9 straight wins for the regular rotation players (everyone sat in the final seeding game). You could argue the Celts are the hottest team in the entire bubble. I won't call you a liar.

- Where do you start when almost everyone who touched the floor yesterday played well? An embarrassment of riches if you ask me that has no wrong answer. Well I'm gonna throw you a curveball. If you read this blog you know how important the first stop is, it's basically the most prestigious award a NBA player can get these days, and for me the only place we can start is Marcus Smart

21/6/4 on 6-10 shooting with 5-9 3PM. I'll admit, I almost always hate the games where Smart's offensive approach is taking threes first and attacking the rim second. However I'm allowed to amend that when he decides to just make all his threes. There were definitely some bad ones, that one in transition after the Timelord block comes to mind, but there is no denying that overall Smart was fantastic on both ends. It's not an accident he was a team high +27 in his 30 minutes.

Is he going to shoot like this all the time? Of course not. But the fact that he's capable of it is good enough for me. If you've embraced the Marcus Smart rollercoaster life you know this is just how it goes. You ride with him on nights like this and you ride with him when he goes 1-7 and can't buy a bucket. But come on, the man had a net rating of +34 on the night, second only to Kemba. Games like this are why we trust and love him and coming up with this type of performance while Hayward is out was absolutely gigantic.

- Brad said pregame that the one thing you don't want to do against this Raptors defense is to over rely on isolation. That shit was music to my goddamn ears. Well, how do you like 25 assists on 39 FGM. In my opinion the way they moved the ball offensively was one of the biggest reasons why this team had no trouble with the Raptors defense. Three players with at least four assists, give me this type of ball movement every game this series.

- Kemba Walker had 3 career playoff wins heading into this season. He already has 5. Not only that, he continues to look healthy and like the Kemba of old and if you're curious what that looks like I would be more than happy to show you

Just 18/10 on 6-11 shooting for Kemba with 4 3PM of his own. I know Kemba is feeling healthy not just because of what he's able to do on the offensive end. It's not all about his burst or the lift he's getting on his jumper. I know Kemba is right when he's also going 100000% on the defensive end, just like we saw in Game 1. Taking charges, shutting down any Raptor he guards (2-12), and generally being super active.

Through his first 5 playoff games Kemba is averaging 23 a night shooting 50% from the floor. He's back baby and he's been better than ever.

Call me crazy, but that seems good.

- Is it crazy that we've gone this long into the blog and haven't even talked about the two Jays yet? Man are we lucky.

Jaylen may have gotten a little 3PA happy and I don't know what the hell Tatum was doing offensively to start, but they both settled down, combined for 38 points, and it was pretty clear the Raptors had no answer. Especially for Tatum in the second half. What's scary is they both can play so much better. Shit, Tatum didn't even score for a majority of the first quarter and this team was up by double digits before you could catch your breath.

- Robert Williams is a difference maker, I don't know how else to say it

When we would talk about his potential, this is what we meant. He is stupid athletic, he blocks EVERYTHING, and the more time he gets the more comfortable he looks. Rob is so much more athletic than either Gasol or Ibaka I don't know what the Raptors do. He blocks jumpers, he blocks drives to the rim, he passes, he rebounds, he isn't making nearly as many defensive mistakes. Timelord is the ultimate wild card for a team that had questions surrounding its bigs.

- Shoutout Daniel Theis for his 13/15 with 2 blocks. Continues to be the most underrated big in the entire league

Not only that, but he had a 71.7 Drtg in this game. No you did not misread that. He had some offensive issues with bunnies like everyone else on this goddamn team, but overall Theis was great.

- I thought Brad out coached the shit out out Nick Nurse in Game 1. He had the perfect plan for Toronto's defense, he was once again GREAT at knowing when to call timeouts, his rotations were solid, these are the things I need from Brad in this series.

- The defense, my lord. You hold Lowry/VanVleet/Siakam to a combined 13-44, I'd say you did your job. The perimeter defense was clamps, I thought everyone was great in the post against Siakam whether it was Jaylen/Semi/Smart/whoever, and this team was nails on the glass winning the rebounding battle 50-40.

Not only that, but they limited the Raptors to just 7 fast break points. That's unreal.

- I mentioned it earlier, but I was not a huge fan of how Tatum started this game. Felt like he was just throwing up prayers hoping the refs would bail him out. It was very weird.

- Outside of Timelord's 5-5, the bench wasn't all that great offensively. It may not have mattered in this blowout, but it will matter in this series. Semi/Wanamaker combined to go just 3-11 and they were outscored by TOR's bench 34-22.

- The turnovers. My god were there waaaaaaaayyyyyyy too many turnovers. Again you might be saying to yourself who gives a shit, well I give a shit. It's all about forming good habits and turning the ball over 22 times ain't it. Every time the Raptors got "close" it was because this team wouldn't stop being careless with the basketball. You make TOR beat you in the halfcourt, they can't hang. You allow them to get in transition and score easy buckets, that's not going to end well for you.

- Brad also said he didn't feel they played all that great offensively, and I get it. The Celts only had a 105 rating to go along with those billion turnovers. Kemba/Jaylen/Tatum basically never went to the line. Maybe part of that was just Brad being Brad but this was certainly not the best we've seen this team look offensively.

- I'll admit it, I was terrified when Kemba hit the floor and grabbed his left knee. I can't help it, this team has fucked me up when it comes to injuries of star players.

- By now you should know the rule. This team wins 5 in a row they get a pass from this section. It's the least I could do.

Tuesday's Game 2 now becomes pretty massive. If the Raptors are able to respond and take that game, we have a series on our hands. If the Celts come out and once again blow this team out, I don't even know want to think of where my brain will go. But I'll tell you this, in my gut I know the Raptors are going to be better. They got punched in the mouth and embarrassed on national television. This team is too good to just roll over like the Sixers did. Expect another battle and frankly that's fine by me. This team is hungry. This team is locked in. This team is playing like the best team in basketball and that's not changing anytime soon.