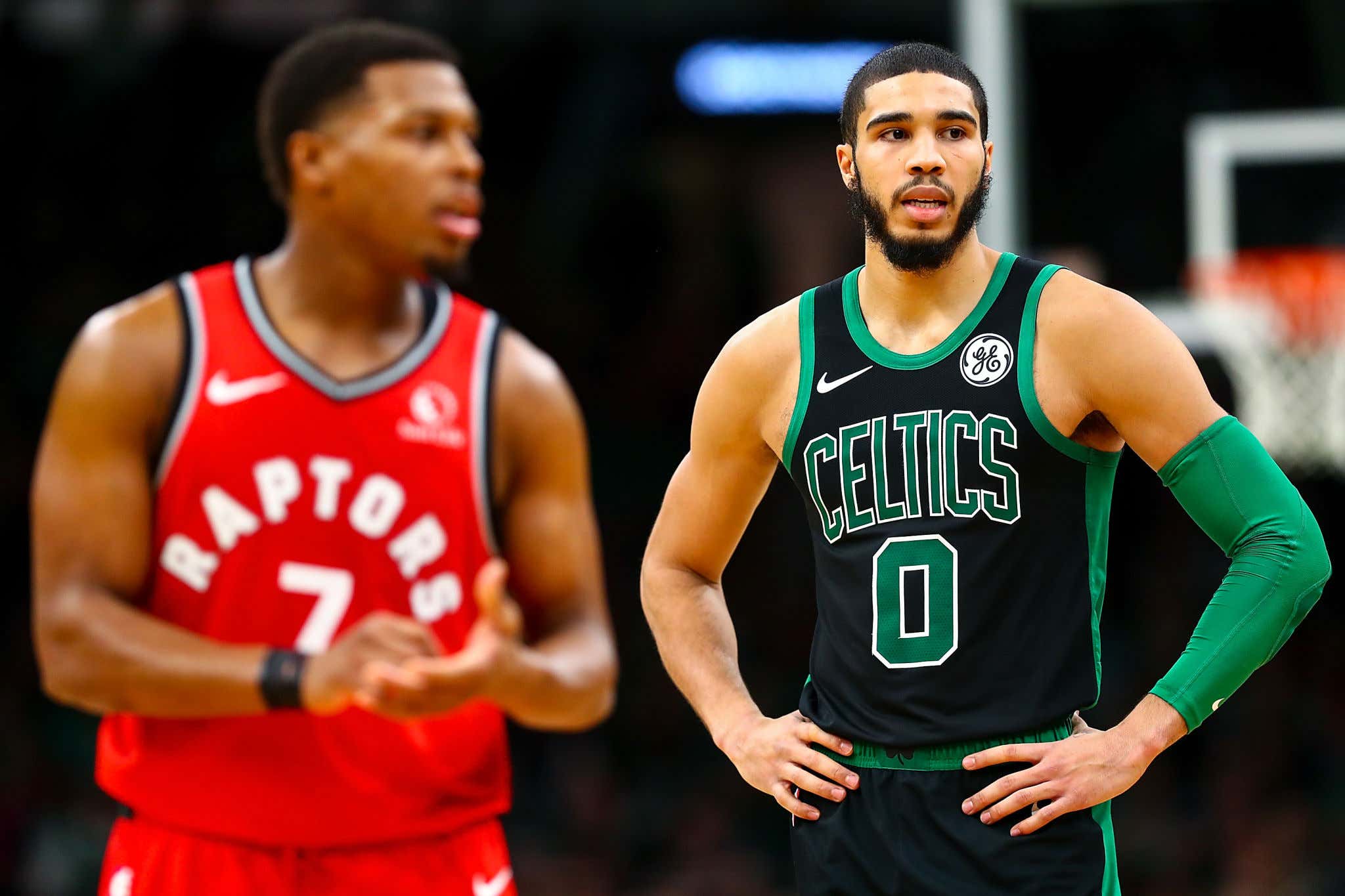 As anyone who clicked on this blog probably knows, the Celts and Raptors were slated to begin their second round series today. That's most likely not going to happen, but this was a blog I was planning on writing the day of the game anyways so we're just going to do it. This is shaping up to be one hell of a series for a number of reasons. It's not only because this is the first time these two teams will ever meet in the postseason, but because when you look at what they've been able to accomplish this season, they're virtually identical. On paper, I don't know if we'll get a more even series in the entire field, it's pretty nuts the closer and closer you look at the numbers.

Here's what we know about both teams. They pride themselves on playing elite level defense, they are both well coached and they both have legit high end talent. But here are some things maybe you didn't know about both that help paint the picture of what this series could look like.

Their records are fairly similar and these two were 2/3 in the East pretty much all year. Look closer though and you see even more similarities. For example in games decided by 3 points or less, they were virtually the same

You get in a close game with either of these teams, they figure out a way to pull it out. These were the most close wins of any team in the top 4 seeds in the East. Surprisingly, when things got to 10+ points, it was actually the Celts who were better at not blowing those leads

Outside of the Bucks, only the Heat came close to these many wins. The point is, you don't want to get down by double digits against either of these guys. The Celts 29 wins were the third most in the entire NBA.

When you then look at their competition, both were "meh" against teams .500 or above

This is important because the main difference in their record was how much better the Raptors were against teams that stunk. That's now out the window obviously in the playoffs. Against the good teams in the league, both proved to have their ups and downs.

As you can see, when it comes to scoring the ball and offensive rating, these two are practically neck and neck. But because I'm a weirdo, I wanted to look deeper. I wanted to see how similar their styles of play were over the course of the season

So when it comes to isolation, the Raptors kinda stink at it. It's be interesting to see how their wing/guard defenders are able to limit the Celts offense who thrives in isolation when they decide to run it.

This actually really surprised me. I would have guessed that with Lowry/FVV that the Raptors were much better when it game to ball handler play coming out of the P&R. Those guys are such good scorers I'm surprised the Raptors don't run it more.

This is another part of their offenses I found shocking. They both run post ups at a similar frequency, but the Raptors stink here as well. I think a lot of that has to do with their bigs not really being back to the basket players. Ibaka/Gasol are more dangerous as pick and pop players where the Celts throw out guys like Kanter who basically can only post up.

Three point shooting is obviously a pretty big part of both offenses, and this is where not having Hayward will hurt. The Raptors were 3rd in the NNBA with 13.8 3PM and the Celts not too far behind at 12.6. So far in the playoffs the Raptors went up a level to 17.8 while the Celts have stayed the same at 12.3. This is a key area I'm watching because the series could honestly come down to which secondary shooters prove to be efficient.

So as you can see, we have two teams that are very similar when it comes to shooting while also being two teams that take good control of the basketball. This is very important because the Raptors are elite in scoring off turnovers. If you can limit those, you take away a huge part of their scoring.

This is not going to be a series like with the Sixers where the Raptors have a dominant post player, but they do still find ways to score in the paint. Both teams are similar in this regard in that a lot of their paint scoring comes from their slashing wings. Both teams drive the ball pretty much the same amount with BOS at 45.6 drives and TOR at 44.0 so I would expect to see that a fair amount from both sides.

As you can see, we're talking about two of the best defenses in the entire NBA that are putting up numbers that are essentially the same. The Raptors switch up their defense depending on what big is on the floor. When it's Gasol, they are going to get into drop coverage, sort of like what we saw them do against MIL. When it's Ibaka they play up more, which will then give the Celts the ability to switch and have someone like Kemba/the Jays attack him. That's where the drive numbers become important. If the Celts are able to be effective in the midrange when the Raptors go to drop coverage I like their chances.

When it comes to contesting shots, you're looking at the two elite teams.

What makes these teams so good on the defensive end isn't just their system, it's their length. The are both elite at contesting the perimeter and in the paint and their length has a lot to do with that. That's why it wouldn't shock me if the offenses on both sides don't exactly look as good as they did in the previous series.

So as you can see, almost across the board these are two teams that are virtually identical. There are some major differences to consider like the Raptors bench. That's about a billion times better than the Celts. But the reason many think this is going to be such a good series if it ever happens has to do with the fact that these two have been neck and neck in almost every metric all season.