(Had to say second best and not the best because the Bob Dylan gang would never let me live it down. So yes, I'm acknowledging Bob Dylan is the best songwriter ever.)

Forty-five years ago this Tuesday (August 25) Bruce Springsteen And The E Street Band released Born To Run. By now the album is well established in rock legend. After two well-received but not commercially successful releases, the young New Jersey rocker, who had already been hailed by his eventual manager Jon Landau as "Rock and roll's future" and who was supposed to be the bridge between the rock of Elvis Presley and the folk of Bob Dylan. was in make or break mode with the third album.

We all know what happened. Born To Run became the massive breakthrough everyone was expecting, landing Springsteen simultaneously on the covers of Time and Newsweek and literally changing the face of rock for the next five decades. Because of course Springsteen and his band went on to become one of the biggest and most successful rock acts of all time and on multiple occasions — during the Born In The U.S.A. run of the mid-'80s and The Rising in the early aughts — becoming the face of rock.

For some reason, Springsteen is a divisive figure amongst music fans. And not because of his politics. Or maybe it actually is, but his detractors like to list many other reasons for not liking "The Boss". His voice sucks. His songs are all about the same thing. He's a one-trick pony. And a dozen others to defend their opinion that he's overrated.

Well, these people are wrong.

His sound might not tickle your fancy, but you're outside your mind if you don't think his songs, songwriting, and impact he's had on rock music as an entire genre hasn't shaped what we've known and loved since the 1970's.

You can call it the "Jersey Sound" but the stuff he was doing in the late 70's and early 80's was cutting edge at the time. And it transformed the way NY city and the entire surrounding area's rock sound progressed going forward. If you don't believe me give The River a good honest listen. Start with "Two Hearts"

Springsteen songs are to storytelling what Michaelangelo was to painting. They're vivid in literal description and in metaphor. They document history through the eyes of the common man, in a complexity that is still able to translate to the basic listener.

This blog is to focus on the iconic Born To Run, but had to lay the groundwork for why Born To Run wasn't a megahit out of nowhere for Springsteen, as much as it was him planting his flag in the ground.

The Born to Run sessions began in January 1974 at 914 Sound Studios in Blauvelt, N.Y., the same location where Springsteen had recorded Greetings From Asbury Park, N.J., and The Wild, the Innocent and the E Street Shuffle. But by early August only one song, "Born to Run," had been completed because Springsteen was having trouble translating the sounds in his head onto tape. Then, keyboardist David Sancious and drummer Ernest "Boom" Carter left the E Street Band.

Help soon arrived in the form of pianist Roy Bittan and drummer Max Weinberg, and when recording resumed in April 1975, another important person had entered the picture. Jon Landau was a well-known rock critic who befriended Springsteen a year earlier. Landau convinced Springsteen to move sessions to a better location -- the Record Plant in New York City -- and offered other in-studio advice. Landau's work resulted in an co-producer's credit, and he eventually replaced Mike Appel as Springsteen's manager.

Released on Aug. 25, 1975 to rave reviews for its cinematic songwriting and updating of Phil Spector's Wall of Sound production, Born to Run landed Springsteen on the covers of Time and Newsweek simultaneously. It reached No. 3 on the Billboard albums chart and has gone on to sell more than 6 million copies.

The album opens up with "Thunder Road", a song that has become a mainstay in the Springsteen Greatest Hits discussion and a staple of his live shows. Talk about making a first impression. It begins with a rhythmic combo of piano and harmonica (how under rated is the harmonica btw? makes every song better), features two KILLER lines-

“You ain’t a beauty, but hey you’re alright
Oh, and that’s alright with me.”

“It’s a town full of losers,
I’m pulling out of here to win”

AND a legendary saxophone solo from the Big Man Clarence.

The next song is the joyful, ragtime "Tenth Avenue Freeze Out". Another JAM. It's also the song that got Stevie Van Zandt (aka Silvio Dante) his full-time job in the E Street Band. Bruce put him in charge of arranging the horns in the song and he did such a good job that Springsteen told his manager to put him on the payroll full time.

The fifth, and title track, of the album, "Born To Run" changed Springsteen's career and would go down as one of the greatest rock n roll songs of all time both commercially and critically.

It features, what Springsteen calls, one of the greatest guitar riffs in not only his musical career, but in all of music history by Stevie Van Zandt. As well as two more all-time solos from Clarence on the sax.

The lyrics paint a picture of a blue collared, rough around the edges, kid from the other side of the tracks, trying to convince his crush, Wendy, to ditch their town. To "make a run for it."

It also features one of the greatest lines ever written, in anything. Song, poetry, prose.

And Bruce belts it out as the crescendo of his accompaniment comes in behind him. Goosebumps every time.

The 8 track album closes out with what is arguably the most well-written song on the whole thing, "Jungleland".

Everything about this song is perfect. The violin that compliments the piano perfectly. The fatalist lyrics depicting the dead end life befalling those growing up in the 70s urban landscape. The spin Springsteen puts on this song while performing it live is a must-experience event for every music fan alive. When the crowd belts out "down. in. jungle. land." while they let the sound drop out and then the band fills back in behind it is epic.

I can't even imagine what it must have been like to be alive when music like this was coming out. Talk about a soundtrack to growing up.

p.s. - I'd be remiss to write about only the songs on Born To Run and not mention the cover art. Cover art was a MAJOR deal back in the day. Vinyl was the name of the game and the cover art of the album played such a major role in the marketability and sales of an album. There are few album covers as renowned as the one featuring Bruce leaning on Clarence on Born To Run. 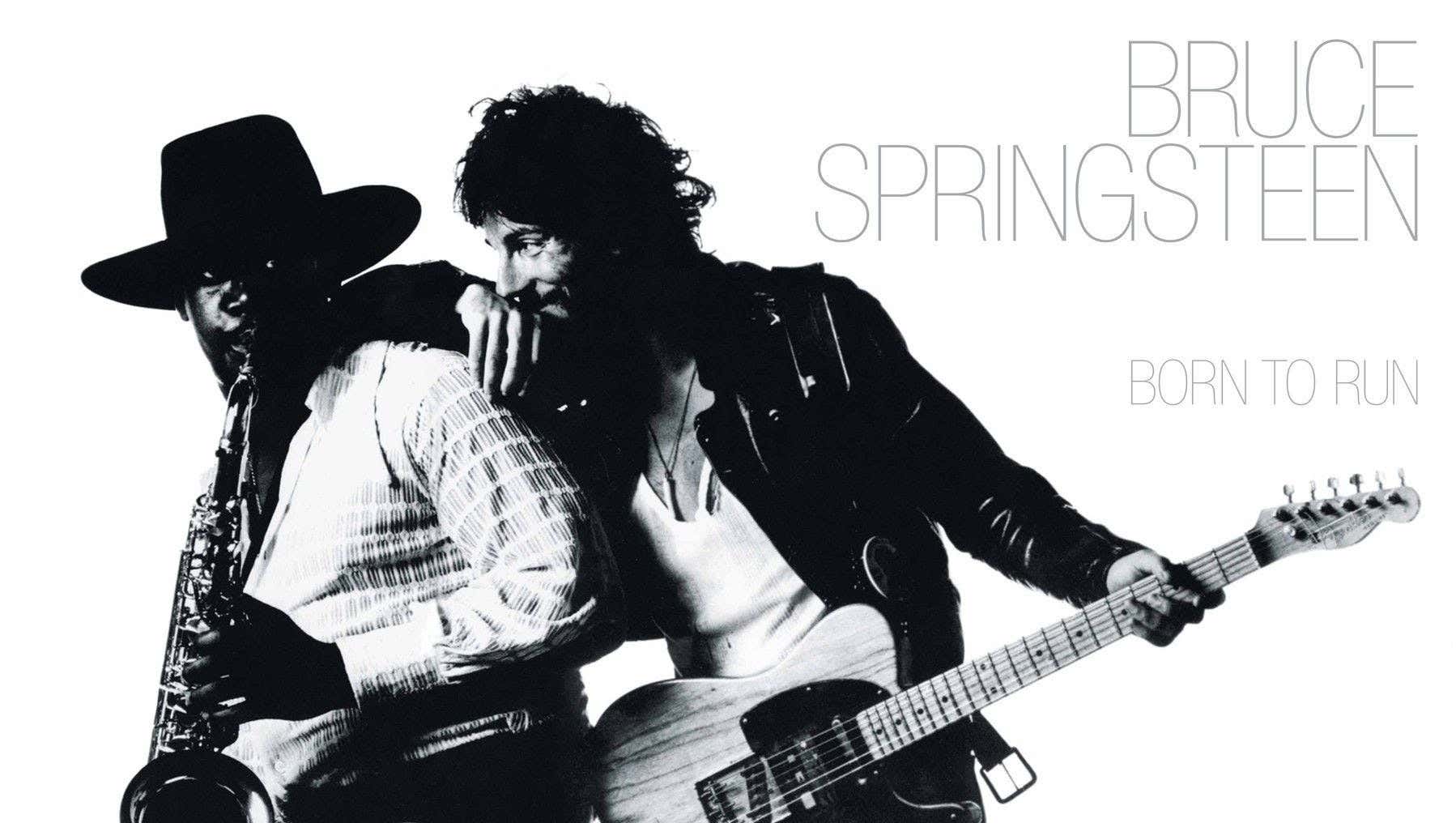 This album also catapulted Springsteen to level's few musicians had seen before (talking Elvis, Beatles, Dylan status) as he graced the covers of Time and Newsweek during the same week. That's how big a deal this album became. 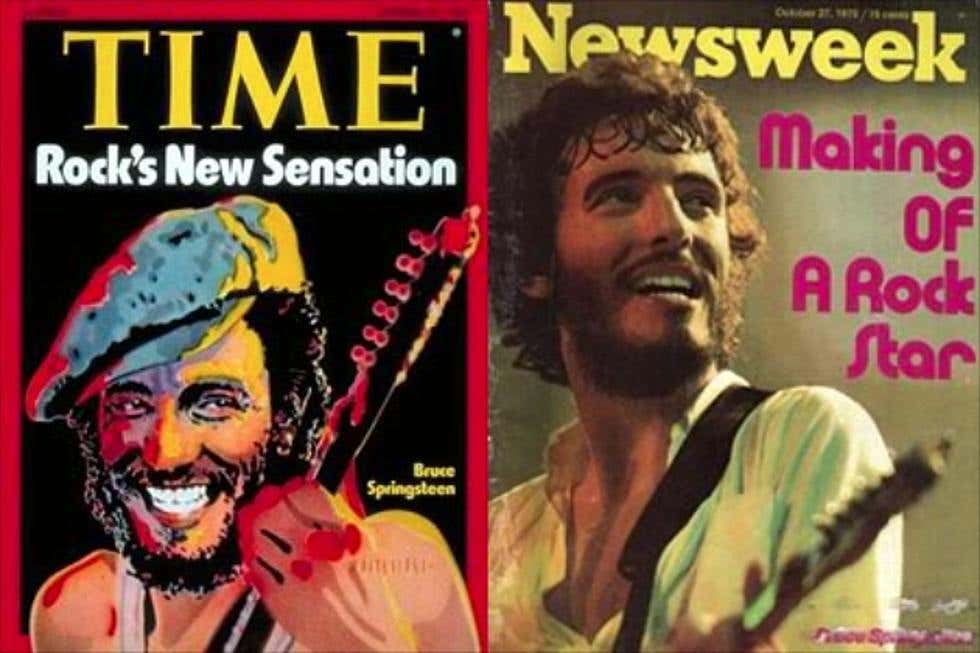 p.p.s. - my girl got me tickets to Springsteen on Broadway a few years ago for Christmas. Probably the greatest gift I'll ever receive in my life. It was a life-changing experience. The Netflix special isn't too shabby either.