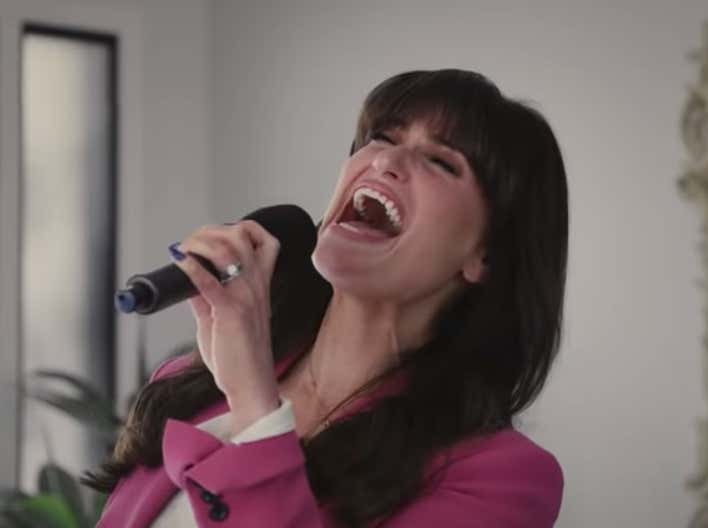 No commercial has driven me to such anger since the Head On (apply directly to the forehead) commercial hit airwaves back in the early-aughts. Just look at that screenshot. You can hear it. It's boiling my blood as I type. But it's also what brought me to tickle the keys today. GEICO, historically, makes some of the better commercials out there. GEICO, old Sportscenter, a third example I don't care enough to include here. These are the gold standard of commercials. So while I could easily sit here and pan this terrible commercial or write a letter to Mr. Geico and demand he remove it from the airwaves posthaste, I'd rather lift up the company that has given us so many gems over the years while simultaneously panning their horrific misses. GEICO,,, welcome to the TIER-rordome. 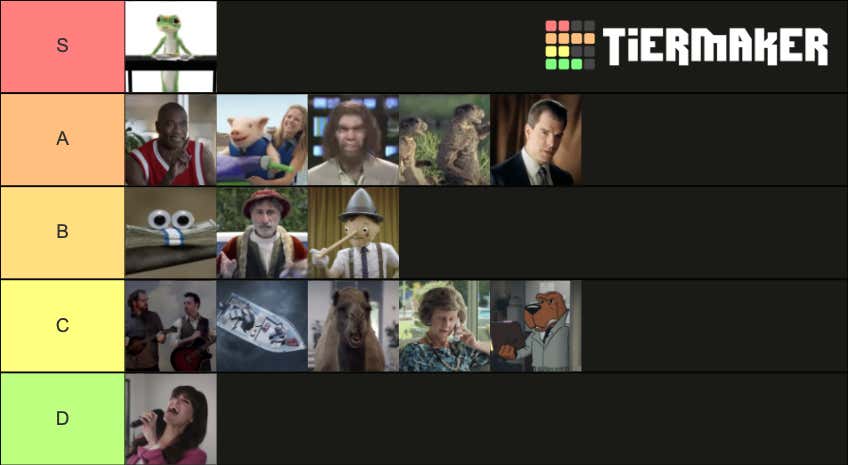 The undisputed king. The originator. Far as I'm concerned this Gecko is the CEO and founder of the entire company. It begins and ends with this sassy British fuck. He created the lane, he's maintained the lane, he IS Queens Boulevard the lane. People always get upset when these tiers come around and the top tier is reserved for so few selections. That's because we don't hand out participation trophies here at Mick Man Tiers Industries. If you want to walk around calling everything the best you go ahead and live your life with your head in the sand. That's not my business. Over here we keep things above board and right out in the middle of Broadway. There is only one true ruler in the GEICO realm and that belongs to the Geck.

For the majority of this tier I'll be talking about the overarching themes GEICO has run with over the years. For example, "It's so easy a Caveman could do it," or, "Rhetorical Questions," or, "It's What You Do." Commercials that ran for years with the same tag line until they came across some new theme to get people to switch their car insurance. But within those themes come great exceptions and Dikembe Mutombo is most certainly one of those exceptions. The theme of the Dikembe commercial is, "Get Happy, Get GEICO," featuring the two folk music guitarists standing on a miniature stage delivering the ham-handed punchline at commercial's end. We'll get to those two jabronis later on. But a general rule in which I live by is that if you put Dikembe into a commercial I'm going to enjoy it.

Maxwell the Pig was a star the first time America set its collective eyes on him, head out the window, pinwheels in tow, squealing all the way home. This is another example of a star being born out of an overarching theme, that theme also making its way into this tier in Rhetorical Questions. If this actor had been born about 70 years earlier he still would've been a successful commercial spokesperson, it just would've been for Laramie Cigarettes. Same suit, same slicked back hair, just cigarettes instead of insurance. The Rhetorical Questions run also included the woodchucks chucking wood. The reason the woodchucks and Maxwell make it on this tier is they were immediate stars in the commercial world. I never once got tired seeing that pig or those chucks and they eventually branched out and got sequel commercials not tied to the Rhetorical Questions guy. But no one, absolutely no one, hit it bigger than the Caveman.

The Caveman has as big of a claim to the S tier as anyone. Sure, we all grew tired of him, but that does not take away from the run he had and the numbers he put up along the way. The Caveman was so popular a room full of Hollywood executives got together and agreed this man who was slightly above tolerable in 30 second spurts deserved his OWN TELEVISION SHOW. That's power. That's damn near S tier material unto itself. But the sitcom, somehow, was a massive flop. And that hubris knocks him down to the A Tier. A fine tier. A Hall of Fame tier, even. But the difference between the Gecko and the Caveman is the Gecko doesn't do it for the fame and notoriety. He's in it for the love of the game, and that passion is what separates the GOAT from the next level of great.

B Tier - Money Eyes, Surprising, Did You Know

Money Eyes deserves a second run. That googly-eyed fuck was a star who got out before he became too overbearing. He made his point, proved he could compete with the best of 'em, and retired early like Andrew Luck. Maybe it's for the best he tapped out while he was still in his prime but I wouldn't hate a second run for ol' Money Eyes. The Surprising ads featured such hits as Tiki Barber as a barber, a sumo wrestler on ice skates, Ice-T at a lemonade stand, the Running of the Bulldogs, and a few other gems. But Marco Polo playing Marco Polo is the real standout from this bunch. Quite funny the first time it aired, never super annoying on rewatches. And the annoyance factor is potentially the most important to making a classic. If you spend an entire Saturday and Sunday during football season glued to your couch you will see one of these commercials no less than 75 times over that two day stretch. If the commercial is annoying, you'll hear it every time and it will ruin your day. If it's good to great? You'll hear it most of the time, then eventually it will blend into your life to the point where it just feels normal and it becomes a nice treat when you do look up from your phone and catch it every now and then. Marco Polo lands into the latter. As do the Did You Know run. "Did you know some owls aren't that wise?" "Did you know Old MacDonald was a bad speller?" "Did you know Pinocchio is a terrible motivational speaker?" All solid commercials, with Pinocchio breaking out and getting another run during their Sequels campaign. Not their best work but this is their median. This is what we've come to expect out of GEICO. So the C and D tier? Disappointing to say the least.

C Tier - Get Happy, Brighter Side, Hump Day, It's What You Do, Count On GEICO

The Get Happy folk music guys stink, stank and stunk. There's only one commercial run that can have two guys telling me jokes and that lane belongs to Sonic. These two frauds with their little guitars and mediocre punchlines were taking all of the credit for an already completed joke. It would be like sweeping up the stage after a Dave Chappelle special and calling yourself the headliner. A simple voiceover could have done the same job as these two wisenheimers and nothing would've changed. You can't be a zero WAR commercial actor and expect me to tier you in the upper echelon. These two assholes are also responsible for the Hump Day fiasco of 2013. This was the favorite commercial of your least funny friend. The commercial was literally mocking the very same dumb dumbs who found it the most amusing. Beyond infuriating. I don't have much to say about the It's What You Do franchise of commercials. They remind me of when all the tv writers went on strike and gave us that weird season of Friday Night Lights where Landry kills a rapist.

Fuck the McGruff commercial and the entire series of ads which inspired it. This was the last major miss GEICO had and I blogged about it back in 2018:

As I watch the playoffs this commercial comes on roughly 100 times every single game and it makes me sick. These cops openly admit they’ve got no leads on this case. Everything they’ve tried has produced nothing but dead end after dead end. They’re packing up and heading home ready to call it quits like the quitters they are. Meanwhile McGruff is out there pounding the pavement, dusting for prints, questioning witnesses, chasing down suspects, just doing his job as he has since July of 1980. Not asking for any special recognition, just maybe a smidgeon of long overdue respect from his coworkers.

And what does he get instead? Ignored. Belittled. Mocked. I’d suggest he take his complaints to HR but we all know he’d just get more of the same down there. A man of his stature who’s been on the force for nearly 280 dog years should be Police Chief by now, not the bottom of the totem pole. It’s an outrage and it makes me angrier and angrier every time it pops up on my television. He’s an officer of the law, just like you or me, who’s done nothing but dedicate his life towards bettering his community and he shouldn’t have to stand for this guff in the workplace.

D Tier - What Are You Waiting For?

As angry as the McGruff commercial makes me, it's nothing compared to John Travolta's favorite singer's. Idina Menzel is too prolific, too talented, too iconic, to be associated with such a train wreck. It really doesn't make any sense which is what makes it all the more maddening. GEICO produces hits. Idina is a superstar. This recipe should work. Instead it's like when the Red Sox signed Carl Crawford. You bring a perennial All Star into a Championship caliber organization and it doesn't work? That means it was never meant to be. You move on quickly and make reference to it never. Hopefully network execs are currently scrambling in an effort to remove this commercial from the rotation. Play the Stamos hair one more, I don't care, rerun one of the classics out of the vault. Just please stop yelling at me about taxidermies every time Quinn Snyder calls a timeout. Me and my family did nothing to deserve this type of abuse in our own home.