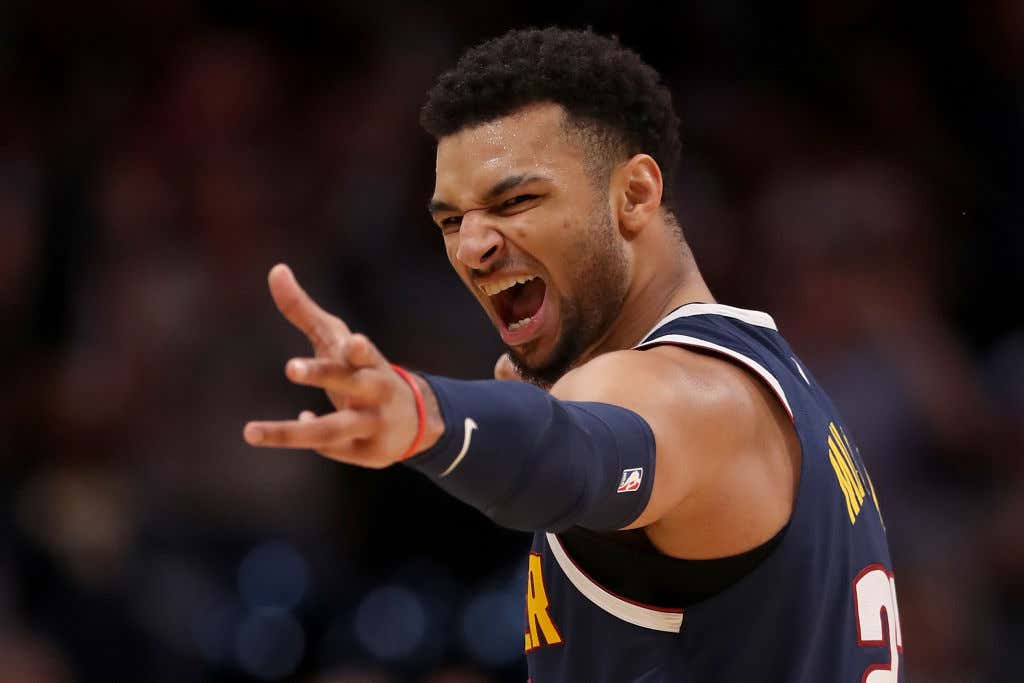 With the first round getting close to wrapping up, I thought it would be fun to take a step back and look at some of the biggest surprises we've seen so far in these bubble playoffs. The quality of play has been everything we could have wanted given what we saw in the seeding games and there have been some breakout performances that have truly made this first round fun as hell. It hasn't been all positive though, so through 8 days of games here's what as really surprised me.

This isn't to say Jamal Murray wasn't really good before the bubble, but the level he's reached so far in the playoffs is pretty ridiculous. I touched on it earlier today but if it was someone who played for a blue blood franchise it'd be a way bigger deal so I want to give him his proper shine.

As of this moment, Murray is the 5th leading scorer in the bubble putting up 30.8/6.4/6.8 on 55.7/52.4% shooting with 4.4 3PM a night. That's insane. He's 2nd in the playoffs in fourth quarter scoring averaging 11.8 points on 72/75% with 2.3 3PM. Read those numbers again. That isn't just in one game, those are his averages for the entire series. In clutch situations, Murray has been the best player in the playoffs averaging 10.7 points on 70/87% splits. These numbers feel fake but I promise you they are very very real. I feel like we need to be making a bigger deal of the leap Murray is taking.

How insane have his last two games been?

Even if you thought Murray would be good in the bubble, nobody could have seen THIS coming.

2. The Miami Heat have a better offense and net rating than the Milwaukee Bucks

Raise your hand if you thought this was going to be the case prior to their second round matchup. That's right I see a total of 0 hands raised. It's true though, the Heat have the 8th best offense and 4th best net rating in the entire playoffs. They are very close to also having the better defense too (MIL is 3rd at 102.9 and MIA 4th at 103.9). That's what makes their pending matchup so exciting to me. Whether it's on paper or in terms of their actual production, the Heat have shown to be a worthy opponent to MIL. I think we all expected MIL to look great against an 8 seed, but the Heat have been right there with them the entire first round.

There's no way you would believe me. The good news for Heat fans, is it's true. He's averaging 9.5 points (3rd) on 50/40% splits in fourth quarters so far in the playoffs. His play was a huge reason why the Heat were able to sweet the Pacers and if this is the quality of play they are going to get from their PG spot it takes a TON of pressure of Jimmy Butler to be a scorer late in games.

4. LeBron James is having a career year from behind the arc

Having to deal with LeBron in the playoffs is hard enough. When he is aggressive and engaged there aren't a whole lot of people on the planet that can contain him offensively. Well here's something you definitely didn't see coming. LeBron is shooting 42.9% from three so far in the playuoffs which is the best he's ever shot from deep in the postseason in his entire 17 year career. Call it a small sample if you want, that's fine, but the point is that now defenders have to worry about his three point shooting. The second you to that, he can just use his strength and blow by you.

5. The Jazz are awesome at offense and terrible at defense

Well this shit is just backwards. After losing Bogdanovic there is nobody that thought they would have the #1 offense in the playoffs with a 127 rating. People especially didn't think they would pair that with the 3rd worst defense. That's basically the exact opposite of how the Jazz play. We're used to seeing them score like 95 points and be tough as nails on defense. Now they are getting into shootouts? Very weird for my brain to try and understand that.

As of now, he's 7th at 9.3 attempts a night. Guys like Embiid (duh), Luka, AD, Jimmy Butler, Kawhi, and Donovan Mitchell are all taking more FTA a night. Seeing as how Harden has led the league in FTA for 6 straight seasons, I figured he'd be doing more of the same in the playoffs. For him to not even be Top 5 is a little surprising.

You know how many fanbases are punching air right now wondering why Jeff Green didn't play like this while he was on their team? Like 80% of NBA fanbases because I feel like Green has played for every team in the league. So far he's throwing up 17/6/6 on 56.5/48% with 3.3 3PM a night. Who could have seen this coming?

When you talk about Vucevic, he's more of a back to the basket player. The fact that he's averaging close to 30 a night isn't a surprise, but when you see he's making more 3PM a night than Damian Lillard, Jayson Tatum, Joe Harris, Duncan Robinson, Jaylen Brown, Paul George, Chris Paul, Khris Middleton, LeBron James etc it's for sure surprising.

During the season he averaged 1.6 a night and that number has more than doubled against the Bucks while shooting a 44% clip. If this is a part of his game that is here to stay, Vucevic becomes a legit option for today's NBA.

Uh, I watch this team a whole lot and I did not expect them to be 2nd in the playoffs in blocks per game at 5.5. A huge reason that's happening is because they are getting 4.0 blocks a game from their wings. For them to have more blocks a night than the Bucks or Blazers was certainly a surprise.

I'll admit, I thought the one clear advantage that the Blazers had against the Lakers was on the perimeter. We saw what Dame was able to do, but CJ has not hold up his end. Just 41/35% splits in the playoffs and a -10.5 for the series. They had both looked so good in their run to the 8th seed I did not see his offensive struggles coming. He's really struggling in the first half of games and that's why it's no surprise the Lakers look so good.

10. Everything about the Sixers

Even if you thought they were cooked once Simmons got hurt, nobody could have predicted they would look THIS bad. The second worst net rating at -12.3, worse defense than the Blazers, Embiid falling apart every second half of every game they played, Tobias Harris making like 1 3PM in 4 games, it was all way way worse than anyone could have imagined. Sixers fans will tell you their team was trash, but they were singing a much different tune before the games started, even once the Simmons news came out. As the biggest underachiever in the field, even I didn't think they'd be so bad.

So those are the things that have stood out to me through 8 days. The sample is still relatively small so I'd imagine some of the shooting numbers I talked about will come back down to normal, but there's no denying that these bubble games have been filled with surprises left and right. The good news is we're only getting started and I anticipate we'll have more before things are over.