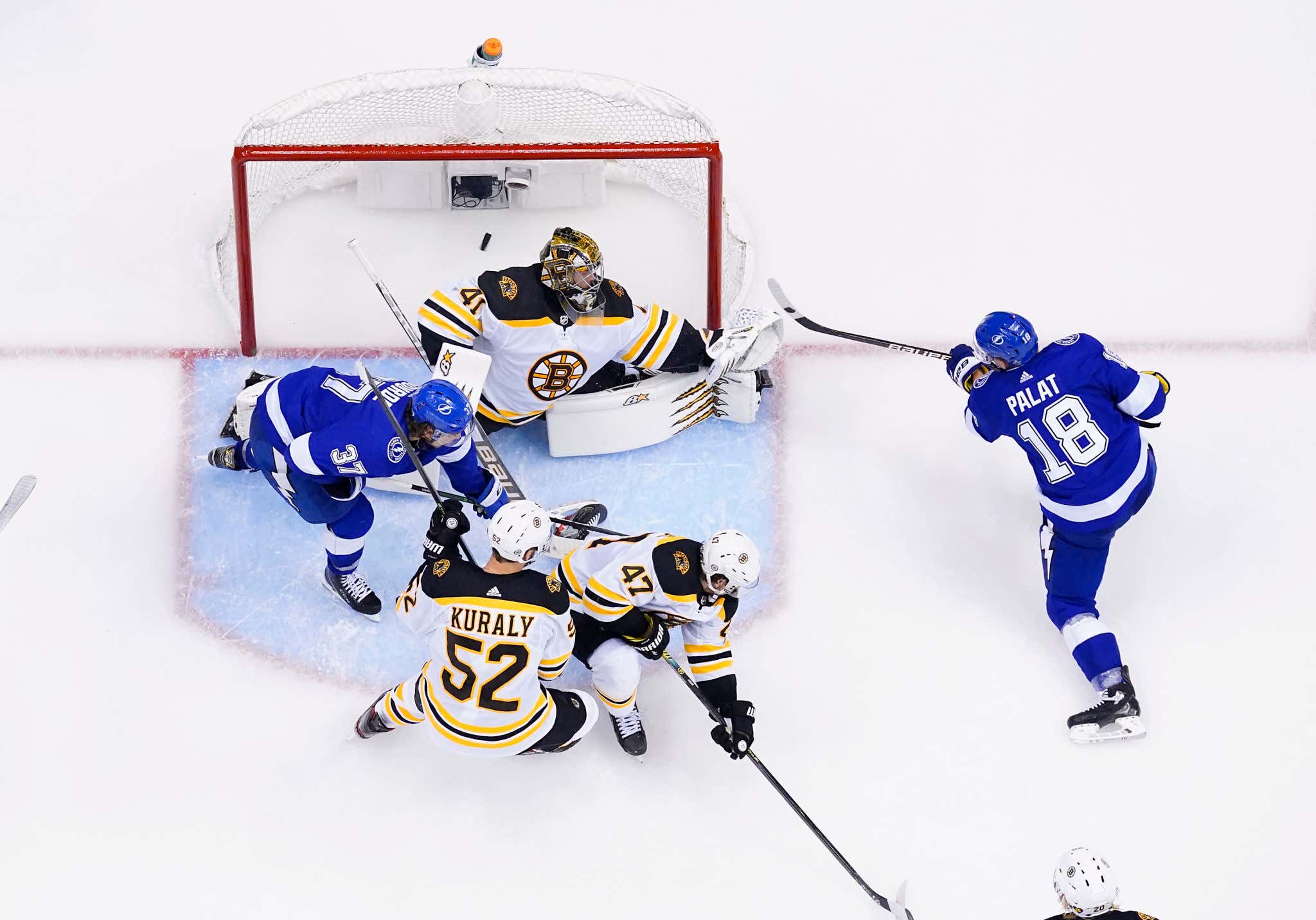 Despite getting outplayed all night long the Bruins found themselves in OT with a chance to go up 2-0 in the series. Instead, after failing to clear the puck out, Ondrej Palat scored to tie the series up a 1 apiece. Here's how we got here…

Nick Ritchie!!! opened the scoring for the B's, play started in the d-zone, Zach Bogosian broke his stick and allowed Ritchie and Bjork to go in on a 2 on 1, Ritchie passed to Bjork who missed the net wide but Ritchie followed up the play. Pure chaos. Somehow trickled through Vasilevskiy and in. 1-0 Bruins.

Barclay Goodrow thought he had the equalizer with the redirect, but Bruce Cassidy challenged for offsides and won. Brayden Point was offsides.

Blake Coleman legally got the equalizer with 7:18 left in the 1st. Zach Bogosian split the D and Coleman dove to beat Halak. 1-1. Krug and Carlo got walked to say the least. Tampa with the much better effort in the 1st.

Despite a flat 2nd for the B's, Brad Marchand regained the lead for the Bruins on the PP (Palat high sticking penalty on Clifton). Beautiful pass from Pastrnak. 2-1 Bruins.

55 seconds later Nikita Kucherov tied it up with a redirect. Tie once again late in the 2nd, 2-2. Both teams exchanging goals in the middle frame.

Tampa took their first lead of the game (and the series) with 9:20 left in the 3rd, Blake Coleman with his 2nd of the night, snuck behind Chara and Clifton who was up in the play. Soft shot (looks like Clifton got a stick on it, slowed it down) beats Halak. 3-2 Tampa.

Late in the 3rd Brad Marchand scored his 2nd of the night to tie things up. Sean Kuraly with a hell of a shit and an even better pass. Just pure chaos to eventually send it to OT.

Piss poor puck management, B's turn it over and Ondrej Palat wins it for the Lightning in OT early. B's were outshot 9-1. That puck has to get out, has to.

Effort was certainly better as the game went on but not a good game for the B's. Had no business being in OT but couldn't finish the job.

- Bruce Cassidy won an early offsides challenge. Credit to the B's video team who had it right away.

- Nick Ritchie indeed scored a goal. But the 3rd line was on the ice for both of Tampa's goals. Not sure if Anders Bjork is the answer on that line. I'd like to see Kuhlman instead.

- Tampa came out firing in the 1st period, certainly had the B's on their toes. Krug and Carlo getting walked by Bogosian was brutal to watch to say the least. Didn't care for the Bruins first period. Not a great start, not a great game. Not gonna win many playoff games playing like that. Tampa was the better team, but the B's had a golden opportunity in OT. Just bad puck management all night long.

- Like I said. Toooouughhhh game for the defense. Krug and Carlo got walked. Coleman splitting Chara and Clifton after Clifton shoots wide. Brutal defense all around. Carlo had the puck on his stick and couldn't clear in OT leading to Palat GWG. Gotta tighten up before tomorrow. 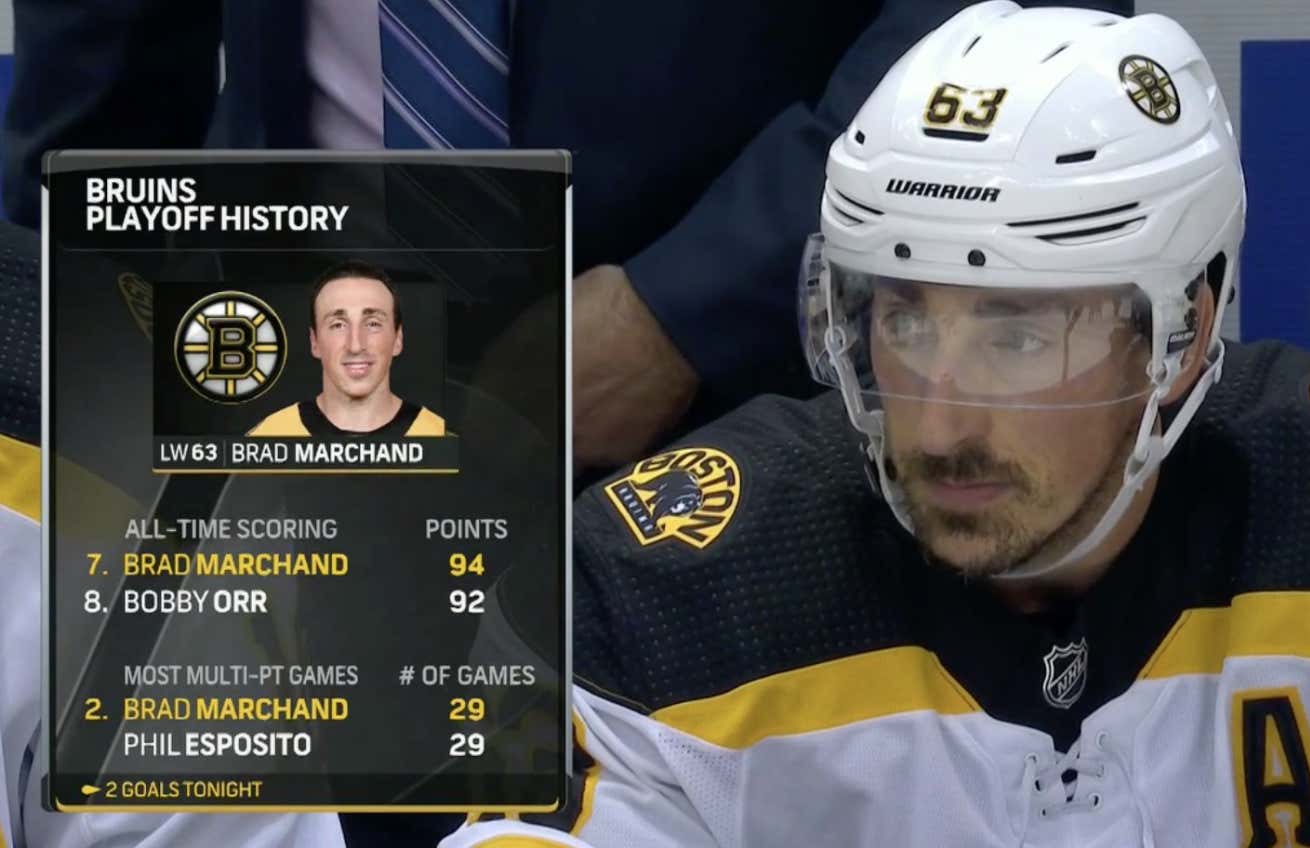 - Marchand had himself a night, 2 goals including the game tying goal late in the 3rd to force OT. He's been stellar so far in the playoffs, probably 1b to Krejci. Was mixing it up with Cernak earlier, he's at his best when he's playing on the edge. Unfortunate result tonight but Marchand was the best player on the ice.

- Speaking of Krech, the B's 2nd line has been the best line of the playoffs, but they were pretty quiet tonight. Not enough offense generated by them. DeBrusk got dinged in the first by Shattenkirk and he didn't look right the rest of the game.

- B's PP went 1 for 3. It truly is either phenomenal or dog shit, really no in between. Tampa has yet to convert on the PP during this series. B's so far are winning the special teams battle.

- There was no Ryan McDonagh for Tampa tonight, they opted to go with 11F and 7D. Wouldn't be surprised if they do the same tomorrow, their D were engaged all night long.

- Thought Jaro Halak played okay. He's probably gonna want that Coleman 3rd period goal back. We'll see what Bruce Cassidy does tomorrow but I expect Halak to play G3. I think it'd be a little too crazy to start Vladar who has never seen NHL action. No travel, Halak should be good to go tomorrow but we'll find out in the morning.

B's need to have a short memory, back at it tomorrow night, puck drops at 8 pm. (Why the fuck do we need back to backs in the bubble?) If they don't make necessary adjustments they could find themselves down 2-1 in the series rather quickly. No travel in the bubble, I'm sure it'll be an optional skate in the morning. Then back to work tomorrow night. Flush it and it's onto the next.