Big Cat has a lot of awesome tweets. That's kind of like telling Bill Burr he has some great jokes! However, this tweet from yesterday? It may be his most underrated if you understand the joke. We have truly brought the old Covers forum to Barstool Sports and it's beautiful.

For those of you who don't know, here is the TL;DR of the joke: the old Covers forum (which still exists) was an online message board that gamblers would frequent. There would be petty beefs that would come up randomly that made absolutely no sense, but they captivated you. That's exactly what is happening at Barstool Sports right now.

Hitting The Board vs. Picks Central.

To tell this full story, you have to go back to when Picks Central started in February. The show was thought to be just Brandon Walker, Dave, and Big Cat, at least that's what I heard. On the first day of the show, just minutes before they went live Dave asked where the hell is Marty? And then boom the Picks Central show was born.

At first, the show would have a rotating cast of characters. Sometimes Black Jack and Paul Lo Duca would go on. Jeff Nadu, aka Big Man On Campus, would come on every now and then. Due to COVID-19, Picks Central was put on hiatus due to no sports. These were the records at the end of Season 1:

I want you to remember this tweet. It's important.

Everything was all good with Brandon Walker and BlackJack during quarantine. They virtually watched WrestleMania together for over 3 hours:

Brandon, BlackJack, and Paul Lo Duca even had their own podcast together during April!

From April to the end of July, there was not any interaction between these guys. They were all doing their own thing. Brandon was doing the 8 billion shows he is on and Paul/BJ were doing a lot of Horse Racing content.

Funny enough, what I believe started all of this was this simple tweet from a friend of the program Jeff Nadu. This was after it was said that Brandon's job was to fix the beef between Jeff and Rico Bosco:

Jeff was not happy with what seemed like Brandon taking Rico's side in the beef.

And that's where it alllllll begun: 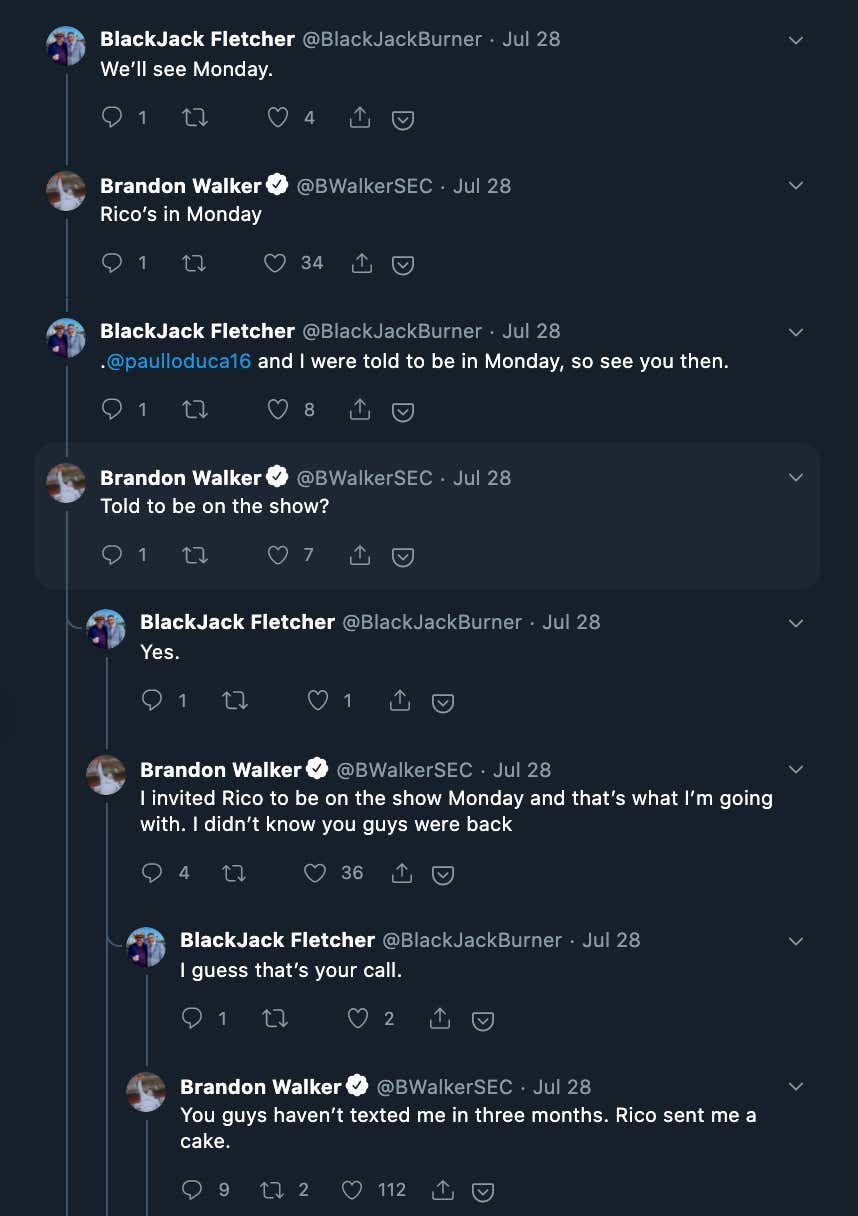 Is the whole "you didn't text ME!" thing incredibly childish? Yeah, but this is Barstool Sports. Get used to the drama, loser.

BlackJack and Rico have had a beef going all the way back to 2017, which is when BlackJack was hired as an "intern" for the Pick Em Show. Rico was offended by this and would always refer to BlackJack as the man in the cowboy hat. 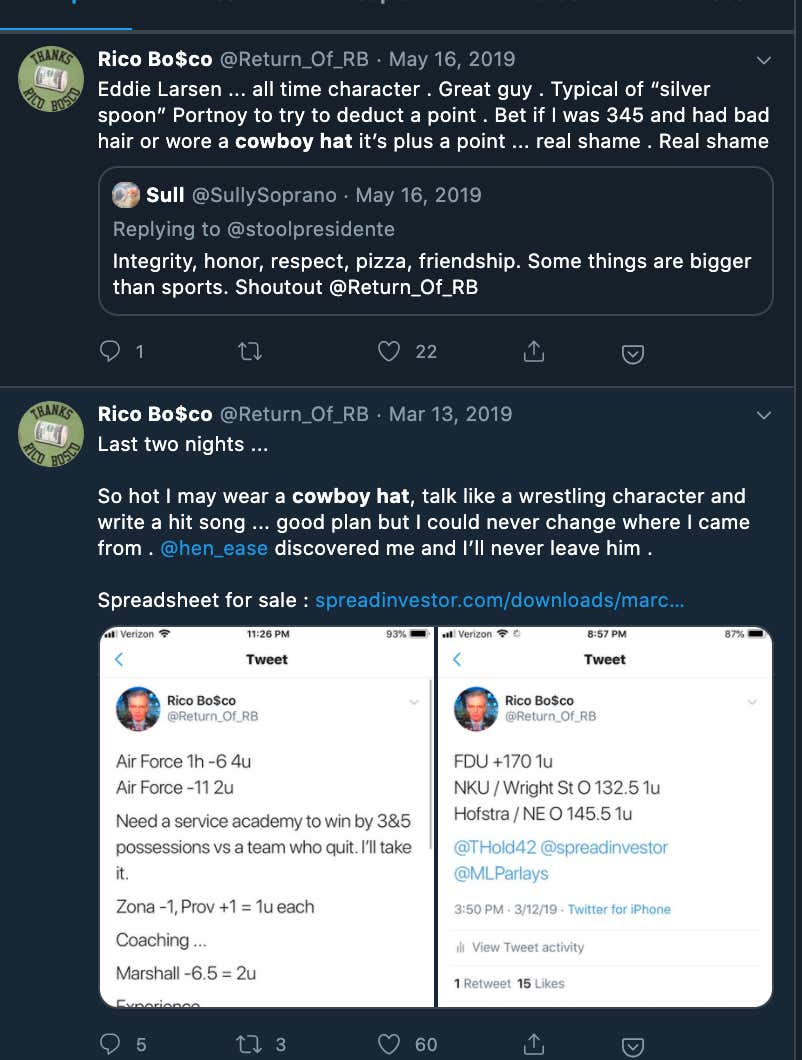 BlackJack went and worked for the Action Network but returned to Barstool, Rico has been a part of Barstool since. Seven years!

Hitting The Board Debut:

On August 17th, at 11:45 AM, BlackJack and Paul Lo Duca released the first episode of Hitting The Board, just 15 minutes before Picks Central started. This show was done with the purpose of giving the Stoolies "an actual gambling show that talks about gambling:"

Based off of that we decided to give the Stoolies an actual gambling show that talks about gambling. So here is the first episode of "Hitting The Board" with myself, Paul and Reags.

I guess this comes from the place that BlackJack and Lo Duca think Picks Central is more of a comedy show than a picks show and they want to put the SPORTS back in Barstool. Brandon Walker responded:

Paul Lo Duca was not happy either:

On August 17th's Walk The Line, Jack McCarthy (runs social for @BarstoolBets and producer of Walk The Line) had an outburst against the new gambling show:

A rivalry was born.

A weird mix in this rivalry is that Hitting The Board seems to have multiple social accounts. 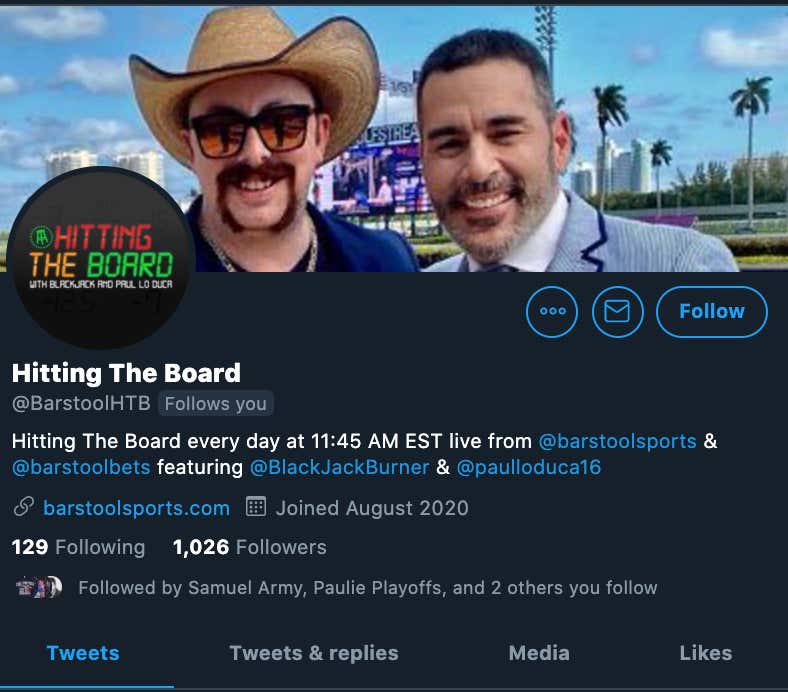 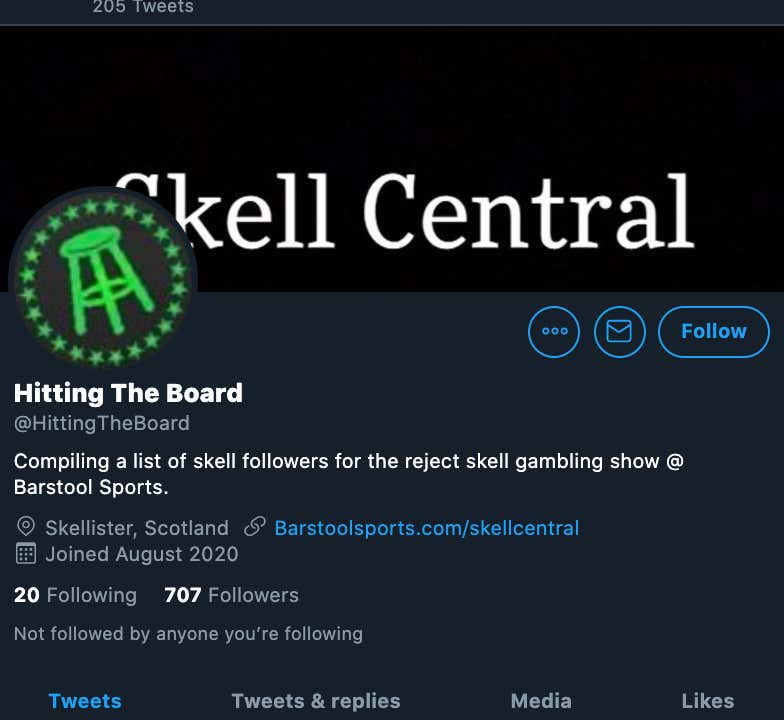 Pretty sure the top one is the real one. This isn't that important to the story, but I just wanted to mention it because I'm always confused to which one is the real account.

The man who has been lighting the fire behind the scenes has been Karim. His performance on the @PicksCentral Twiter account has been nothing short of remarkable.

He's dug deep into the numbers touted on the "real gambling" show:

Called them out for saying false statements:

More on Karim in a bit.

There we go again with the whole "we are the REAL gambling show of Barstool." The issue with Paul saying this was he is kind of on a cold streak compared to Brandon Walker's hot streak:

I mean I love the comparison. If Paul was hot and BWalk was cold? That would be a perfect call out. It just doesn't fit with their current records, but whatever, I love the drama.

Earlier in this blog, I told you to remember the records from season 1 of Picks Central. Karim had a tough run, which Lo Duca called out on Twitter on August 20th:

Karim works in social and his job is to tweet not from his account, but Barstool owned accounts. I want to put an emphasis on that it's quite literally his job.

Pretty sure this is a "Brandon is fat" joke. I don't approve of fat-shaming and will be reporting this to HR.

Lo Duca then accused Karim of cocaine use, which was completely out of left field, because Karim is not a drug guy, like at all. I'm still trying to understand where the chirp came from by Lo Duca. Karim doesn't even act like a drug guy.

Rico Breaks It Down:

Before this whole thing started, Brandon and Dave had their little beef:

Yesterday, this graphic was tweeted by Picks Central:

Funny stuff if you ask me. Great content. Great use of social media. Well, it wasn't funny to Paul Lo Duca, who apparently went to management to complain:

I believe BlackJack and Paul feel they haven't got the proper "push" from the company while Picks Central has. I have no evidence to suggest this, it's just a guess that they would complain to management about that.

Lo Duca denied the whole going to management thing in what may go down as the worst blacked out screenshot in the history of Twitter:

I couldn't believe it was real. Lo Duca did end up getting to use this as a chance to remind everyone he did play in the Majors, so I guess it was a win for him, but still….how is it 2020 and you don't know how to blackout texts?

For those who don't know, Paul Lo Duca was actually quite a good baseball player. I want that on the record, so he doesn't send any pain my way.

Back to the topic at hand. Lo Duca did not go to Dave, but he did go to Jen, the head of our video department who often talks to everyone involved in content about any issues they are having (she's great and has been with us for close to two years now). She took Lo Duca's complaint and sent it to Gaz, who then sent it to our chief of content, Dave Portnoy:

Just unreal that Lo Duca would go through all that trouble defending himself when it appears he is as guilty as could be.

This was really disappointing to hear because I always looked at Paul as a guy that would never go to HR. He grew up in Brooklyn, the same place both sides of my family grew up, and you know what didn't have an HR? Brooklyn before it became a bike lane for the Vegans and Soy Boys.

I will say, Lo Duca is still a dude that rocks:

Most of us would be afraid to make a camel toe joke in 2020. Not Lo Duca. That's why I'll always love him even if he wants to kill me after this blog.

This just great content. That's the winner in all of this. Picks Central is a bigger show than Hitting The Board:

But that doesn't mean HTB should stop. They should keep making the same content and causing a stir. The best thing that ever happened to professional wrestling was when WCW and WWF were competing against each other. We need a similar rivalry within Barstool, with Dave Portnoy pulling the strings. During that time everyone should invest into Penn National and then watch the stock price go to the moon.