The Cubs chances are 61.7% according to one of the most trusted sports information databases in recorded history. The White Sox are 8.1%. That's about a 750% difference in raw odds, good for over 7-times the likelihood that the Cubs win the division. I didn't make the numbers I'm just reporting them.

And trust me, I don't want to post this blog after getting my ass handed to me all weekend but at the same time it's my professional obligation to keep Cubs' fans informed. In this case it means letting go of those 2 games because they're insignificant in the grand scheme. Even if you want to tell me the NL Central sucks then I'll remind you the White Sox are 5-5 against the shitty NL Central. I'm not here to start a holy war fellas. Literally just trying to put some context behind the future of the 2020 season for the Cubs, and the White Sox happen to be a perfect barometer based on this weekend's series.

People complained that Javy Baez was done and a bum and a loser, and then he went 3-5 last night with 2 bombs, thus unlocking El Mago status for the next two weeks at least. It's like Mario running over a star and now he'll be out there fucking people up and mushroom stamping opposing pitchers. That's what happens when this guy gets going and I think we saw it last night:

If you want to stay with Baseball Reference numbers tho, it's evident that a gassed up Javy Baez would go a long way for the team.

83 OPS+? 5/38 strikeouts to walks? .219 batting average? That's so obviously not Javy Baez that you just have to wait maybe another week before going back to his stats. Big time hunch in the back of my brain that he's about to go off.

Elsewhere, here's a great article about Yu Darvish and why he's basically going to win the Cy Young. We'll be talking a lot more about him this week on Red Line Radio so here's your shameless plug: tune in this week. 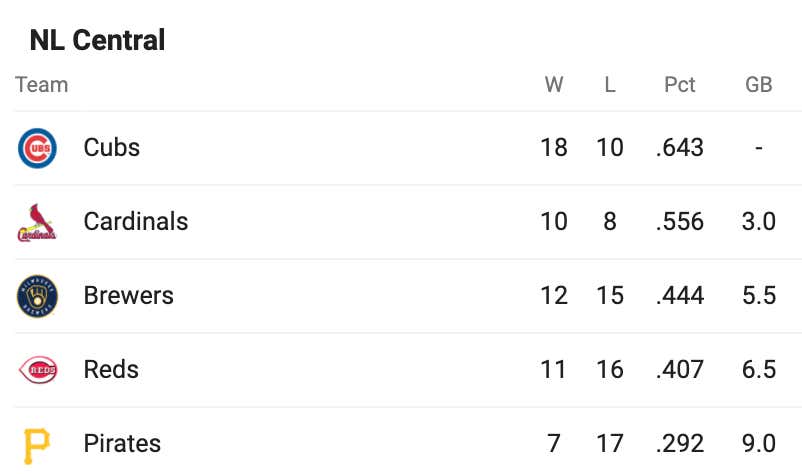